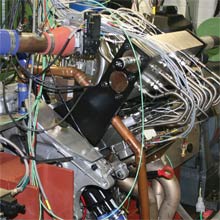 In the past updates, I've seen many people suggest diesel cars as an alternative to hybrids.

VW is bringing back the diesel Jetta to the US, which is a great idea. I don't really like the Jetta, and wouldn't have purchased one, but when VW stopped bringing them to the US, I thought that was a mistake. The cost of diesel is high now, $4.10-4.20 in Denver v 3.60 for gasoline, so there's a 12-14% difference in MPG to even things out. However a 60mpg diesel is a great buy for now.

Regardless of how we move forward with automotive technology, I think that the X-Prize will have a fundamental effect on what we drive in the future. I think that we will look back someday in history and see the X-Prize as the event that has fundamental shifted cars away from traditional car design dominated by a few large companies to a more free-for-all method whereby many smaller companies influence the cars we drive.

Tucker, Delorean, and others have tried in the past, but none had great success. I think the X-Prize will not only showcase new ideas and designs, but also level the playing field somewhat between smaller companies and the traditional automakers. I don't think it will be anything like what the Internet has done for the publishing industry, but it will be a fundamental change.

If you're interested, you can see ten contenders for the prize in this slideshow. There are some interesting entries, though I still think the Aptera is the front runner, but I like the Motive and the Phoenix SUT.

This is an interesting idea: a home refueling station, if it can be economically sold and the sources for fuel don't cause more damage to the world. It produces 35 gallons of ethanol in a week, which would allow you to drive over 900 miles if you had a car getting 30mpg. For someone like me that lives quite a ways away, this would be a great emergency source of fuel.

I'm not sure about the bio-diesel/ethanol debate. I know we aren't efficient in how we handle some agriculture in the US, and there are other considerations such as deforestation (a problem) and food supply impacts. To date I don't think that anyone really knows how best to deal with these issues. Companies left to choose what to do themselves might not be efficient for any particular country or the world as a whole, but this type of technology is an interesting idea. Talk about a DIY process 🙂

I know that many of us would like to have hydrogen powered cars, probably with fuel-cells, which would drastically reduce pollution. Denver isn't in the ten most polluted US cities, but I don't think we're that far behind either. However I've seen this article talking about how hydrogen cars won't help for years in terms of reducing our use of fossil fuels.

While that's probably true I think it's just as important that we continue to invest in hydrogen and other technologies. I wonder where we'd be if people have been working hard on alternative automotive technologies since the 70s.

We've had a busy couple months since the last update. We've gone from 20k miles at the end of March to 25k at the end of May with lots of school functions, end-of-year kid events and a trip to Southwestern Colorado. No maintenance issues to speak of other than one more oil change.

The mileage has gone up as the weather's warmed to over 50mpg for most of May, after hovering at 48.5 for most of April. The updated statistics are below. If you're wondering about why I've calculated things the way I have, check out last month's Car Update.

This month Steve Jones looks at the problems in the auto industry along with a link to the cars most likely to be caught speeding.

With the start of a new year, Steve Jones gets back to the car updates with a look at winter driving and changes in the car industry.

This month's car update focuses mainly on the Prius and changes that might coming in the car industry.

With the price of gas rising and no end in sight. Steve Jones steps back to talk a bit about what solutions there might be to ease the burdens on everyone.

The bimonthly update looks at a compressed air car, the X-Prize, daily rentals, and hybrid pickups.