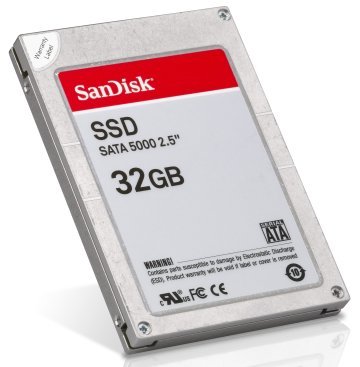 There has been a lot of news over the last year or so about SSD (solid state device) hard drives , which are essentially high performance versions of those flash drives you keep in your pockets. I find my drives fairly indispensible, keeping one in my pocket constantly and backing up editorials and other work on them regularly. I've even seen them used to demo SQL Server performance issues, since a USB flash drive shows much worse performance than an internal disk.

When Apple announced an SSD option for the Macbook Air, things really started moving and others have announced plans in their lines. This past week I saw an article that said many IT Managers are looking at SSD for their enterprise servers, replacing multiple hard disk drives.

That surprised me, since all the SSDs I've seen have much lower capacities than most conventional hard drives and they are much more expensive. It would not seem to make much sense to replace all your hard drives with SSDs, especially in the database world. The article points out, however, that there are places where an SSD might make quite a bit of sense.

Performance is a place where SSDs tend to shine and many of the newer SSD drives can far outperform a mechanical hard drive. The way that some systems have gotten great performance from a mechanical hard drive system is to chain multiple drives together in something like a RAID 0 scenario (or R10) and stream part of the data from each drive. I can see a single high performance SSD replacing multiple drives in this case.

However in terms of a database server like SQL Server, capacity comes into play as much as performance in many systems. I couldn't see it being cost effective to replace your database files on SSDs. That doesn’t mean you don't want to look at SSDs. Log files, tempdb, maybe selective file groups would probably benefit from the performance of SSDs and I'm sure that many of our performance tuning tricks will change as this technology becomes more commonplace in database servers.

One of the other points the article makes is that SSDs can be more power efficient. Tom's Hardware ran some tests for laptop SSDs and found that this wasn't necessarily the case. I'm sure they'll get better and better as the technology improves, though Tom's Hardware was testing single drives. If you replace 10 HDDs with SSDs, I'm sure you'll save on power.

This technology is still new, but it's one that I think DBAs might want to keep an eye on as I'm sure we'll have more and more of it incorporated into SQL Server instances over time.

Steve's Pick of the Week

Don't Talk to The Police - It's not quite database related, maybe a little because it talks about withholding information for your own good. I found this to be fascinating, however, especially for those in the US and worth 45 minutes of your time.

Today's podcast features music by Incompetech. Kevin Macleod has some great compositions in all genres of music. Check him out at www.incompetech.com.

As DBAs we must secure and protect data, but what can we do when there are fundamental issues with the way the systems are designed. Steve Jones comments on problems with voting machines.