I wandered into the Red Gate offices, notebook in hand. In a corner, a .NET programmer was attempting to write a User Interface design tool. Ahead of me, a developer on our Exchange tools was puzzling over an IronPython script. As I approached my desk, my fellow editors, normally hunched in concentration over an article, chapter or editorial, were staring at a formative iPhone-version of the Simple-Talk website. Was I dreaming? Had someone adulterated the coffee machine? No. This was 'Down Tools' week!

The everyday round of developing software, or administering databases, can become a routine that blunts the creative edge to the point where you miss the obvious. How can a team find a way of occasionally breaking the routine, and getting the inspiration back?

Late last year 2 developers, a tester and a UX specialist decamped from the Red Gate's Cambridge offices to a converted barn on the wild Norfolk coast. 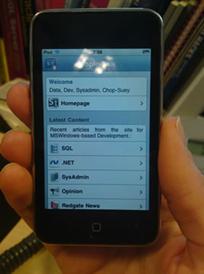 It was a return to simpler days, when you could toss a problem at a bunch of creative developers and see what happened, without too much formal planning or management. What emerged, ultimately, was SQL Search. It's proved a very popular free tool, with over 10K downloads in the first 2 months.

Red Gate, encouraged by this, wondered if more people in the company could be given freedom to break from their usual routine and explore projects that interested them. The result was "down tools" week; four days in the run up to the Easter break in which people had the opportunity to temporarily cast aside their assigned projects and normal responsibilities, to cancel all meetings and work exclusively on a 'useful project' of their choosing, with whomever they chose. Each team had to have something to demo in a "Show and Tell" session at the end of the week, and had a maximum project budget of £500.

People are often at their most creative and inspired when workable solutions are required against the odds of limited time and resources, and the buzz around the office was marked. I approached the lone coder, working on the UI Sketching tool, and he told me that he'd set himself the challenge of "producing something better than Visio in 4 days". He cheerfully shown me how far he'd got; I think he might succeed!

The Exchange developer showed me the simple GUI tool his team were working on, to help DBAs automate SMO and IronPython scripts; elsewhere, we had an "SSMS Session management" project that aims to make SSMS query tabs behave rather like Google browser tabs, remembering the contents of the previous sessions. For Simple-Talk, we've been working on project "SimplePod", where we've used an iWebKit interface to make our RSS feeds available on the iPod and iPhone.

Aside from the resulting tools, a wonderful side-effect, often overlooked, is the new discoveries and ideas that spring from working on new projects, with new technologies and new people. Even if SimplePod doesn't, on its own, have a huge impact, the experiment has helped us discover unexposed RSS feeds and come up with completely new ideas for using RSS more effectively and exposing our content to different media. It's a pattern that's repeated across all of the 'down tools' projects.

Sometimes it's important for a developer or DBA to be given the opportunity to 'shake up their brain'. What falls out is almost always worth having.