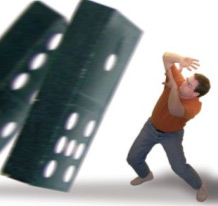 What happens to data when a company dies? It's a great question and I have some experience here. An article on C|Net  reminded me that there's not necessarily a standard answer for where your data might go. In the article it mentions that some places give you notice and time to retrieve your data, and some might not.  But it's not quite that simple.

I've worked for a couple start ups in my career and had one literally fold while I was working there. I helped carry out equipment on a Monday morning after the doors were locked and employees were turned away. In the weeks that followed, I helped to move some equipment around, and even install our software at a few former clients (we hosted their data previously) and helped them get up and running.  Those customer's data went to them, at least a usable copy of it, and they had negotiated the right for an escrowed copy of our system.

But I wondered about all the data from other customers.

Data from all our customers existed on a few servers, both production and development, as well as in backup tapes. The executives of our company had the backup tapes (or access to them), but the servers were split among 3 former IT workers, including myself.

A few weeks after the company folded, it's "intellectual property" was purchased by  another firm, and I sent a couple servers to that company. I ended up being allowed to keep a couple pieces of hardware as "severance", including a development server. However I never wiped the disks and eventually recycled the machine with a local company.

I have no idea what became of the data that others had, but it definitely included what we would call "identity" information today. And I know of a few former customers that weren't contacted to let them know their data had been "sold" in some fashion.

As we use more and more services, especially hosted servers, this is definitely an area of concern for some people. And for companies trying to sell their services. If those companies can't protect data, even after they might go out of business, do you want to do business with them? Is this something DBAs should be asking of their executives?

I think this is an area where the digital world definitely needs to mature.

Lockdown or Let Them Free

Do we take security too far? Are we creating unnecessary rules for those that need to use the resources we support? Steve Jones talks today about security and how we might want to approach it when handling rights for developers.

What Data Should You Protect?

Perhaps we need to protect more data, according to Steve Jones. With the ability to identify most people with 10 digits of information, Steve Jones asks you to really think about what you need to store.

Placing a Value on Data

What's your stolen data worth? It might be worth investigating, as Steve Jones suggests. Then you'll know how much you should be spending to protect it.

The Danger of Algorithms

What problems occur because of the algorithm chosen to generate data? A new report says that social security numbers in the US can be predicted. Steve Jones has a few warnings about what algoriothms you choose.

A common request is how can you secure SQL Server data and prevent the system administrator from viewing data. Steve Jones talks a little about the issue and how you can handle it.