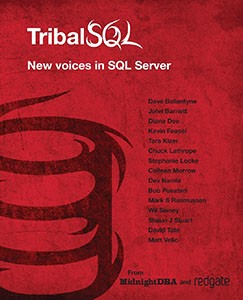 MidnightDBA and Red Gate have joined together to produce a new book on SQL Server, written by 15 first-time authors. The resulting book, TribalSQL, includes everything you should know about SQL Server that isn’t taught in traditional training, they call it Tribal knowledge. The book is very much a group effort where all the participants have donated their time and royalties to charity. TribalSQL is expected to launch at this year’s PASS, hitting stores in October.

In 2011, Jen and Sean McCown (MidnightDBA) were talking to their audience (Whoa, what was that? Here’s some background.) about how great it would be if a bunch of first-time authors got together to write a SQL book. The idea stuck with them, and the word spread. Jen started collecting abstracts and volunteers to help with peer and technical editing.

Eventually Jen ran into Red Gate’s Tony Davis, a man with many years of editing technical books under his belt. Tony signed up to join Jen’s small horde of volunteers, taking on the responsibility of final editing.

MidnightDBA wanted this book to be a fully community driven project, so not only was the book written and edited by volunteers, all royalties will be paid to the charity Computers 4 Africa.

Computers 4 Africa collects redundant IT, which is refurbished and data-wiped before being sent out to African schools, colleges, and community projects. Their mission is to help lift the continent of Africa out of the poverty trap by equipping the next generation to work in a global environment.

What’s really in the book?

The topics in TribalSQL cover what each of the authors considers vital database knowledge – in other words, there’s a wide range. Here’s a selection of the chapter titles:

SQL Injection: How it Works and How to Thwart it by Kevin Feasel

This book holds the key to "encryption without fear". In it, John Magnabosco sweeps away some of the misconceptions surrounding SQL Server's encryption technologies, and demonstrates that, when properly planned and implemented, they are an essential tool in the DBA's fight to safeguard sensitive data.

How to Become an Exceptional DBA, 2nd Edition

Brad McGehee provides a "career guide" for DBAs. It is intended both to help prospective DBAs find a "way in" to the profession, and to advise existing DBAs on how they can excel at their jobs, and so become Exceptional DBAs.

SQL Server Profiler can troubleshoot a wide range of SQL Server issues, such as poorly-performing queries, locking and blocking, excessive table/index scanning, and a lot more. Brad's book will allow you to master the use of this versatile tool.

Whether practicing for an exam or interview, or just wanting to see who's got the biggest SQL Server brain in your office, this book is perfect. Containing 100 SQL Server Central Questions of the Day, this book is a great way to test yourself and increase your knowledge.