Why Is My VARCHAR(MAX) Variable Getting Truncated?

Sometimes SQL Server doesn’t do what you tell it to do.

Normally that’s ok – SQL is a declarative language after all, so we’re supposed to tell it what we want it to do, not how we want it done.

And while that’s fine for most querying needs, it can become really frustrating when SQL Server decides to completely disregard what you explicitly asked it to do.

Why Is My VARCHAR(MAX) Truncated to 8000 Characters?

A prime example of this is when you declare a variable as VARCHAR(MAX) because you want to assign a long string to it.  Storing values longer than 8000 characters long is the whole point of VARCHAR(MAX), right?

If we look at the above query, I would expect my variable @dynamicQuery to be 8001 characters long; it should be 8000 letter ‘a’s followed by a single letter ‘b’.  8001 characters total, stored in a VARCHAR(MAX) defined variable.

But does SQL Server actually store all 8001 characters like we explicitly asked it to?

Copying and pasting our resulting value into a new query window also shows us that there is no character ‘b’ at position 8001 like we expected.

However, this logic is flawed since we clearly DO want to store more than 8000 characters.  So what can we do?

Seriously, that’s it.  You can do something like CAST the single character ‘b’ as VARCHAR(MAX) and your @dynamicQuery variable will now contain 8001 characters: 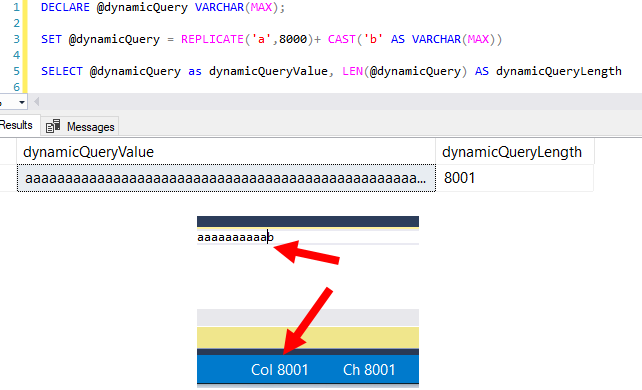 But casting a single character as VARCHAR(MAX) isn’t very intuitive.

Instead, I recommend casting a blank as VARCHAR(MAX) and prefixing it to the start of your variable string.  Leave yourself a comment for the future and hopefully you’ll remember why this superfluous looking piece of code is needed: