Is your area of responsibility starved for resources? Is it difficult to get a raise? If so, don't despair. You're not alone - and there's something you can do about it.

Storytelling isn't necessarily the natural strong suit of technical people. That doesn't mean we can't do it - it just means we might have to work on it. Some of the people we work with are much more nimble at it in general - including managers, executives, sales, marketing and so forth. Resources often go to the area that seems most compelling.

Other areas of a company are often shepherded by people who are better at telling the story of value proposition, the story of risk management and other related stories. As a result, technical people and their areas of responsibility can end up underappreciated.

Those who are good at the story telling often invoke the power of visuals in their cause. That's why I think it's a good idea to find ways to visualize technical skills. It makes the story more compelling.

I want to share a quick and easy way to visualize a set of skills, the evolution of those skills, the need for those skills and so forth. Please refer to the visual below. 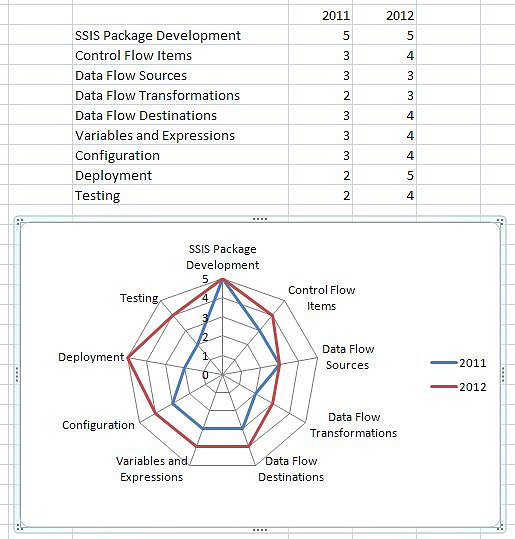 The visual shows a "Radar Chart" created in Microsoft Excel 2007. I show an area of skill - SSIS Package Development and several of the basic facets of that skillset: control flow items, data flow sources, data flow transformations, data flow destinations, variables and expressions, package configuration, package deployment and testing (breakpoints, debugger, etc.). On a scale of 1 to 5 with 5 being expert and 1 being beginner, one can chart out a person's current skill level of each skill facet in the skill group.

With the radar chart, one can do things like make a plan to improve in certain facets from one year to the next, visually show the levels of expertise needed for a new hire to successfully onboard into the current technical environment, show decision-makers what improvements have been made to warrant merit increases and appreciate team member skillsets, and so forth.

This chart can literally be set up in minutes - and it tells a story in a way that can be visually apprehended very quickly.

For me, the year 2011 is the year of "soft skills." I'm reading a pile of books meant to help me improve how I collaborate with people - including how to better apreciate the talents and abilities of others. Many of these books are from "Western" sources - as in they are based on the Western World's culture, psychology and philosophy. So, I was very happy to find a book that taps the rich cultures of the "Eastern" World: Zen and the Art of Making a Living by Laurence G. Boldt.

Wow. I can't say enough about this book. Bolt is the guidance counselor I wish I had when I was younger - but am glad I finally found. Anyhow, Boldt explains that in the great mythical stories of the world there are four characters that are within each of us - one of which is the "Magician" - which is adept at telling stories - utilizing language, visuals and the environment to convince, compell, develop strategy, engage in diplomacy and so forth.

I really like the idea of an "inner magician" that can be brought to the level of awareness, improved upon and called upon to aid in the work we do for good. And, since many technical workers like myself have dabbled in role-playing games like World of Warcraft, Oblivion and so forth - I think the metaphor of magician is one that is readily understood.

That said, it is not enough to know. We also have to tell - and visuals are a compelling way to do that.

I'd be interested to see other examples of visualizations and storytelling that pertain to the technical team's quest to make their areas of responsibility more visible and well-understood - using tools and resources that are readily available.

This is part 1 of a series that I will do on this topic. More to come.