Three Turns On The Road

Huh? My story? Okay. It was never easy for me. I was born a poor black child. I remember the days, sittin' on the porch with my family, singin' and dancin' down in Mississippi. – The Jerk

This meme was started by Paul Randal (Blog | Twitter) who asks the question "What three things or events brought you to where you are today?" I was tagged by David Taylor (Blog | Twitter). I wasn’t born in Mississippi but we sure were poor. I grew up I a small West Texas town of farmers and ranchers. I grew up between two households. I am a single child but have a large extended family and was a middle child in that mix. I as never as tall or fast as my closest brothers but I have always had a very sharp wit and a quick thinker. With all of those factors competition for resources was pretty fierce.

My aptitude for mechanical things and electronics was my first love. Being handy with a socket set has a great value when you have to fix everything you own yourself. It also allowed me to scavenge parts where ever I could to build stuff I wanted. It wasn’t ever pretty but it was mine. The bike I rode during my middle years was made up of at least four others. My radio was also made up of three or four other radios. One of the great things was one of my best friends had a great hookup into technology, his dad owned the Radio Shack in town. I spent a lot of time there and got to hone my soldering skills there on a real Weller station with adjustable temp!. My mom saved and saved. She new computers were the future. Having a Radio Shack meant I got a TRS-80! I scraped up the money to buy a tape drive and eventually a modem. I’ll never forget them telling my mom that this thing would take me through high school and college! I spent the better part of my junior high and high school life on this and later a CoCo3. My High school had Apple II’s and eventually some very coveted Mac’s. My best friend through high school was one of two people that had those “IBM PC” things. I fell in love with those 8088’s and his dads “high end” 286 and got to spend a lot of time on those as well. Those few of us that had modems would dial into each others machines. Needless to say my folks weren't real happy when the picked up the phone and a computer was screaming at them. I wasn’t to happy ether since they usually killed me right at the end of a two hour download 🙂

Alas, it wasn’t my goal to be a computer guy. I loved speech and theatre and did quite well in both. I dabbled in physics but quickly realized it was hard and I wasn’t very fond of the math. The other thing I majored in was partying. I slowly quit playing with computers all together and for about a year was just a college bum. My first real friend in college had a 286 and a modem as well. He showed me the local BBS’es and I was 100% hooked again. He gave me a old hard drive and I went down to a local computer store to buy a used computer and start learning all over again. The shop owner was a friend of my friend and knew who I was. I walked in with enough money to buy a 286 he had for sale. I told him I needed a computer and was planning on starting a real BBS. He smiled, and flatly refused to sell it to me. I argued with him for the better part of an hour. I left his store pretty mad but none of the other computer stores in town had a computer that met my limited budget. I went back the next day and started in on him again. He stuck to his guns telling me I wouldn’t be happy with that old clunker. My friend had told him I was handy with the soldering iron so he made me a deal. I put a down payment on a cutting edge 486 and worked the rest off fixing computers. He took me under his wing and helped fill in the gaps in my computer hardware education. He had a crazy huge stockpile of old stuff that I could tinker with. That is where I found out I truly loved computers and connecting with others via my BBS. Looking back on what Duane did for me is one of the biggest reasons I give back to the community today. Spending hours working on my board I learned to love DOS like no other. It very quickly grew into a rekindling of my passion of programming as well. I changed majors(again) and started the computer science thing. Having people come to the house to play their turns on BRE or Trade Wars, posting up on fidonet groups or sending mail to friends around the world was a huge kick for me. I met some of my closest friends through the board. The Internet will never replace the BBS in my heart. I had a loyal local group of BBS’ers with the ability to communicate globally. Eventually, I dropped out of school to work full time again. As the Director of Technology for a small school outside of San Angelo, Texas I had a huge impact on the students and helped bring computers and the Internet, into every classroom. I also participated in the speech and theater stuff with the high school students as a coach. 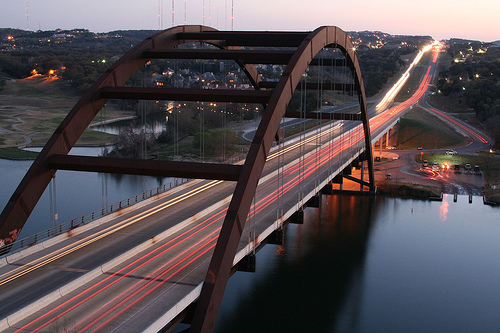 After a shakeup at the school system I was working at occurred and the Superintendent of Schools left, I decided it was the right time to make a move to the big city. I had always loved Austin. I’d done a tour of service in the other major cities and found that Austin was the only one that felt like a real community. I did what lots of folks did in the late 90’s and interviewed at start ups. To be honest, they scared the crap out of me. Most of the time it was people younger than me, with more money than I’d ever seen, doing whatever the hell they wanted. It looked like a lot of fun, but not so much a solid way to build a business. So I did what everyone does, I went to work for Dell. Did it suck? Yeah, kind of. I met a great group of guys there though. It was also the first place I’d ever been that had what you might call a growth path. My boss and my team mates were great people to work with. I had been doing side work pretty much most of the 90’s small software projects or

working in the new open source movement. I loved data, so I spend a lot of time working with databases or building custom data engines. When I had landed at Dell I’d already had several years of tinkering with SQL Server. We had a single server at the school and I worked with clients I met through the computer store as well. I also love a puzzle. I watched the calls that came in. Saw the patterns in them and started plugging them into a brand new SQL Server 7.0 database. Quickly I moved off the phones full time and started working on a special projects team analyzing call volumes, doing root cause analysis and coming up with solutions. Dell also opened my eyes to the possibilities and gave me the confidence boost to just strike out and blaze my own path. I did my time at Dell and moved on to another large company, Broadwing. Again, great group of guys, not so great working environment. But, for the first time I was a full on DBA. Not a DBA/developer/janitor/whateverthebossneeds. I LOVED IT. Lots of machines, lots of data. From there it has just been a natural progression always growing and learning but staying laser focused on SQL Server. Like many folks, the 90’s was an awesome decade for me.

Well, I’m still with SQL Server. I love community work. I’m a family man. None of the things I take for granted today wouldn’t have happened if I’d never been exposed to computers at a young age, or had a stranger take a chance on me, or worked up the nerve to just move to another city when I had a stable job where I was at. Give back when you can. You never know how you will shape someone else’s road for the better.