I was reading Kendra Little’s ( b | t ) post on SQL Server Edition Changes and it reminded me of the work I did at my last position.   I did LOTS of downgrades, seriously, LOTS.

When we started auditing our systems we found TONS of Enterprise and Standard Editions being used in development and QA environments.  In the past, Microsoft gave us a pass and only cared about what was being used in production, but this year they indicated that not to be the case, so a remediation was in order.

Since I had done a good deal of work with Michael Well’s ( b | t ) Scripted PowerShell Automated Deployment Engine  (SPADE) for new server setups, I was the best candidate to handle the job.  I lost count of the total number of downgrades that I did, but I have a few dozen pages in my notebooks that look like the one below.  This page would have been one night’s work. 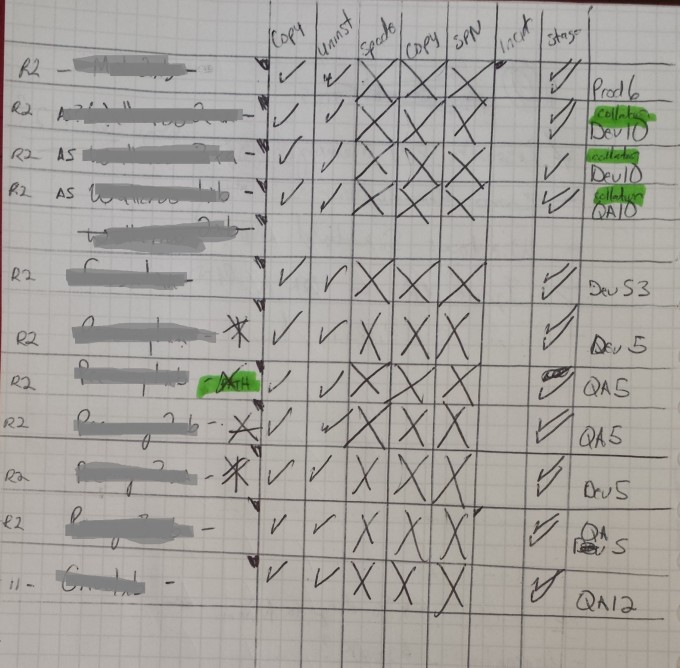 The process which got me through a few hundred downgrades was fairly simple:

All in all, I was able to knock out this process multiple times, over multiple nights spread over a 2-3 month time frame.  Any thing that came up out of the ordinary during downgrade time I would simply skip that server and knock out the remainder.

One thing to note is that all of the servers that contained SSRS databases had to be coordinated with the team that ran those servers as the SQL Engine and SSRS engines have to be the same version, otherwise it wouldn’t operate.  Another gotcha, was SCOM I believe.  Luckily upgrading to a higher version has been a built in option of SQL Installers since 2005 I believe, a quick manual run of the install media in your SPADE folder and it can be upgraded in place, less than a minute in most cases.

This had been my experience, yours may vary.  If you have a large environment and find yourself doing builds fairly regularly, I highly suggest checking out SPADE, it can automate nearly all of your install and standardization tasks right out of the gate. Quick and Easy!