Has SSMS (SQL Server Management Studio) been crashing on you? Have you been getting Out of Memory messages when attempting to run queries?

Here’s what you end up seeing with the “System.OutOfMemoryException”:

After a simple search on Bing I found KB2874903, which states that SSMS is a 32 bit application and large queries can cause this message.

So why would a vendor release an application compiled as 32 bit? Simply put there are many more sales opportunities when you add 32 bit in the mix. So why limit your sales to just 64 bit users? The answer is you wouldn’t and they don’t.

SSMS is a 32 bit process. This can be seen by attaching the process to VMMAP. Simply add everything up and you’ll see that the limit is 2GB of VAS (Virtual Address Space). Here’s one question though. Why isn’t SSMS compiled as LAA (Large Address Aware)? This would allow the process to consume the entire 4 GB 32bit address space on a 64 bit machine. While this wouldn’t resolve the issue it would give delay it by 100%. 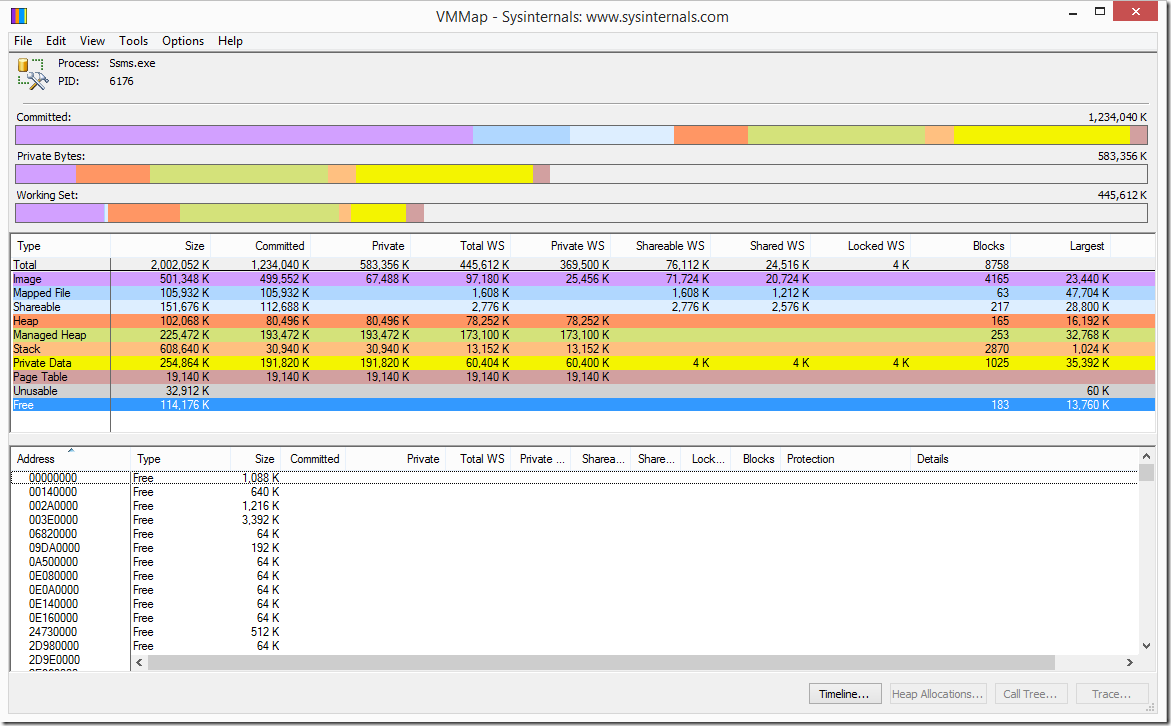 So you’ve got plenty of memory but SSMS still gives OOM errors?

Yes that’s right. RAM doesn’t really have much to do with this message at all. This message is related to your virtual address space for the process. From the image above you can see that there is only 114 MB free of 2 GB. When a process allocates and deallocates bits in the VAS the area can become fragmented.

The little bits of white in this graph represent the free areas where new bits can go. Memory in Windows is allocated contiguously so if there isn’t a space large enough to fit your data it could result in an OOM error. 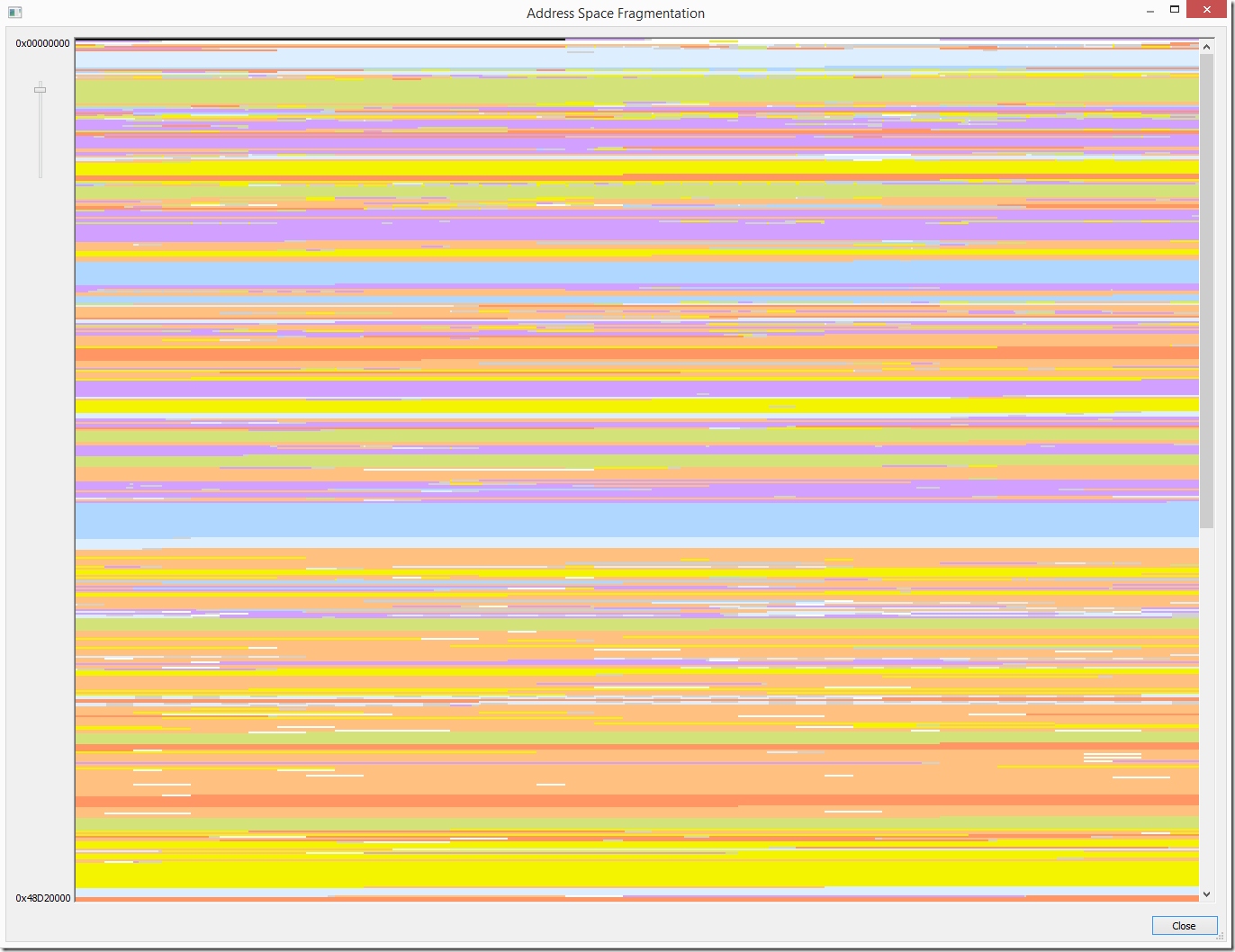 You can see that the free memory has reduced to 67 MB. 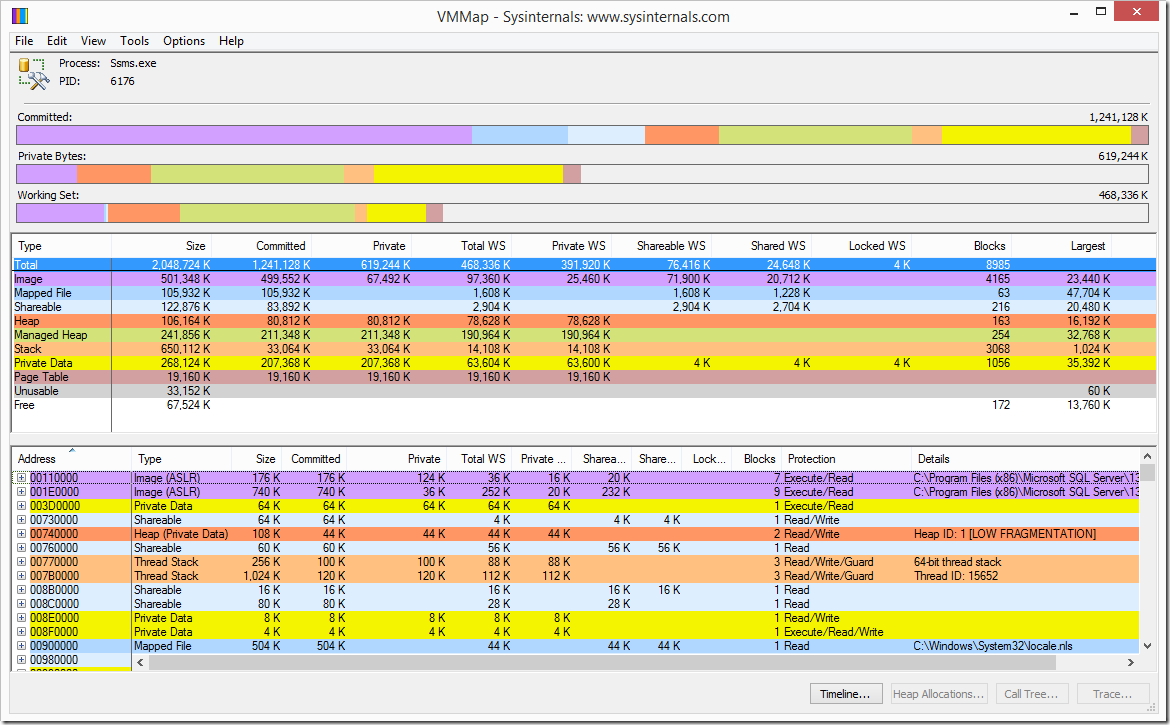 Examining the process with Perfmon

When using PERFMON to examine a possible memory leak you want to monitor the following counters in the Process object: 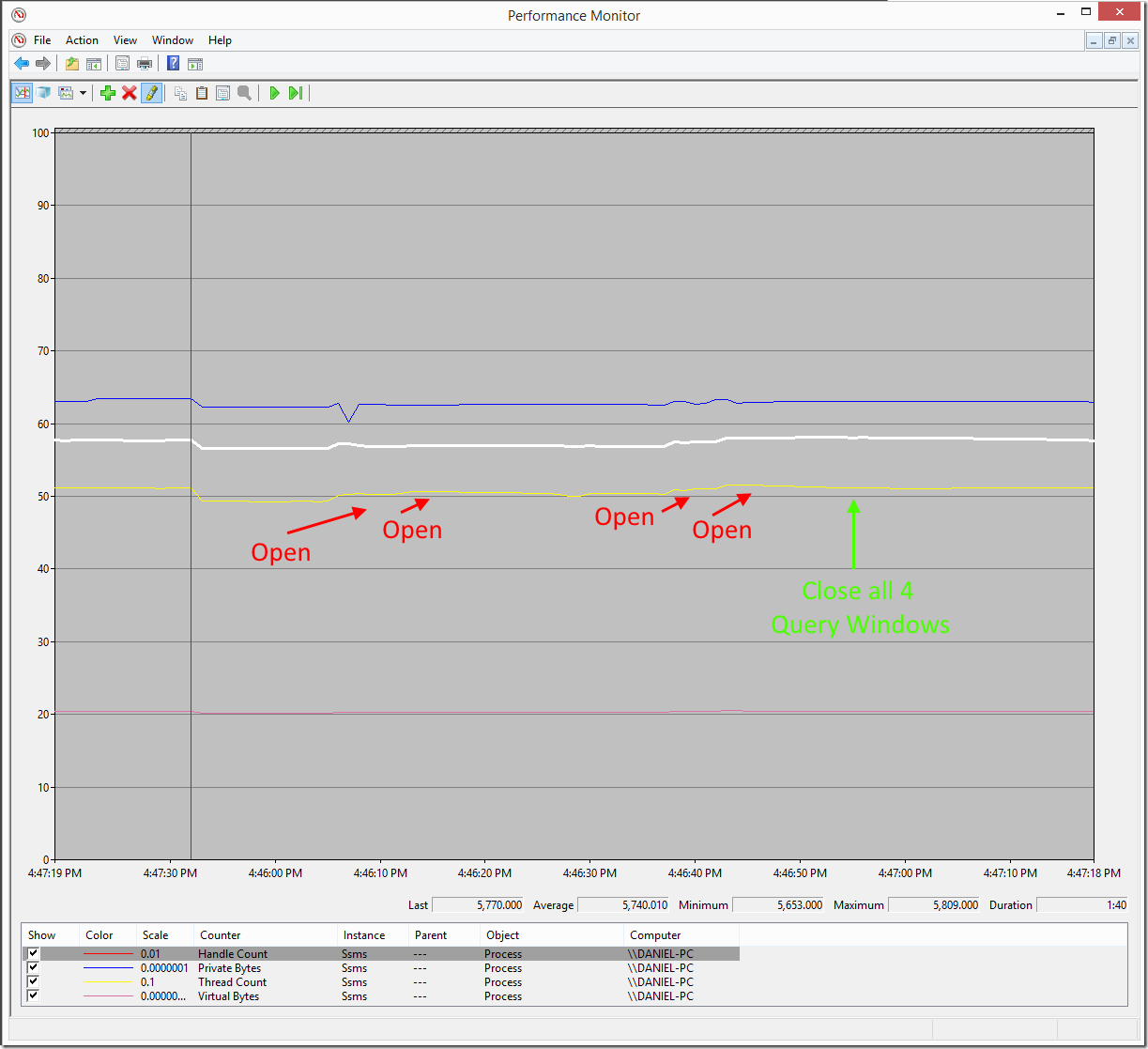 The PERFMON graph above shows that when a query window is opened the handles, threads, and private bytes all grow.

When the windows are closed, SSMS does not release the associated resources. This certainly looks like a leak or at least has symptoms of one.

After quite a short while of these OOM messages SSMS decided to crash. 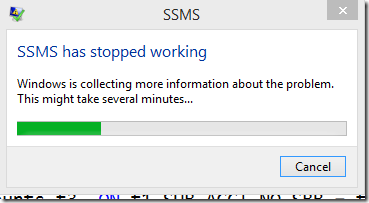 After the crash, SSMS restarted and you can see that all of the memory has been released.

And now the cycle begins again with the clock being restarted. After opening and closing enough query windows I’ll be back in the same Out of Memory boat.

Let’s hope that the team working on SSMS can look into this issue and resolve it quickly. I’m seeing quite a few people starting to complain about the apparent increase of these events since SSMS 2016 was released.

I’d be interested in hearing about any issues you’ve had with SSMS. Let me know.

*UPDATE 2016-10-07* – Microsoft reached out to me on Twitter saying that this has been fixed in the latest update for SSMS. I have tested SSMS release 16.4.1 (build 13.0.15900.1) and can confirm that the Virtual Bytes and Private Bytes appear to be cleaning up appropriately. Be sure to get the latest build from https://msdn.microsoft.com/library/mt238290.aspx to avoid any memory related crashes that may cause you to lose your work.

*UPDATE 2016-10-14* – I was working on a small query this morning and the issue happened. The query only returned a couple rows. I ended up closing a few windows and was able to run the query. I then ran a slightly larger result for the same query and found that after scrolling down I could no longer scroll up. I checked my Virtual Bytes and sure enough I had nearly 1.85 GB used. Following this SSMS crashed and everything was back to normal. @Microsoft, release 16.4.1 did not resolve all memory leaks in SSMS.