It’s been a few months…time for another Spotlight!

Just to catch you up, occasionally someone in the SQL community – usually someone visible, but without celebrity status – catches my attention, and I feel like drawing attention and praise to that person. Over the last year, I’ve done Spotlights / Follow Fridays on Wendy Pastrick, Lori Edwards, Tim Mitchell, and Ryan Adams. 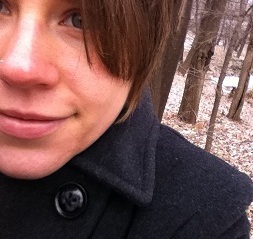 Only the Highest Shutter Speed Can Capture Her Without Blur

Me: [Professional voice] So, Jes…how long have you been working with SQL Server?

Jes: [prim and proper, legs crossed, hands folded] I took my first database class about five years ago in college, really liked it, and jumped into working with Reporting Services right away.

Over the course of three years I worked up from “the girl that writes reports when she’s not answering help desk calls” to the company’s DBA.

Me: Coolness. What was the college course, btw? The best we had was set math, and I was horrible at it…

Jes: I attended tech school. The name of course was, literally, “SQL”. It was a T-SQL class, so I learned SELECT and JOIN…on a kick-a$$ AS-400 that probably was sitting in a basement boiler room.

Me: Hah, wicked. Next up: What’s your preferred stomping ground in SQL these days? I know you’re handy with the SSRS….

Jes: I love me the SSRS. I am working on a fantastic SSRS blog series, actually. However, a couple months ago I changed jobs and am now a full-time production DBA. The best part about this, other than working in a building surrounded by a barbed-wire fence, is that I am really learning the internals of SQL Server. My love of the month, and probably the year, is performance tuning.

Me: Nice. Have you gotten Grant Fritchey’s book on execution plans yet? Good stuff.

Jes: I have a thoroughly-thumbed-through, dog-eared copy of Grant’s book. I love it.

I recommend the book as a starting point for a lot of people.

There’s a lot than can go into performance outside of just queries, though, and I’m also wrapping my head around virtualization, SAN storage, partitioning, SSDs, disk I/O, and that good stuff.

So then. Beatles or Elvis?

Jes: I’m going to have say, Long Live The King. My mother had all his albums – ON VINYL.

Me: Wow. Alright then, Trek or Wars?

Jes: Oh, gosh, now there’s a debate I have never settled with myself.

I did swoon/faint/ogle Wesley Crusher in middle school…but Wars has the Force….

Me: Okay then, how bout you tell me a bit about the Oshkosh Jaycees. I follow you on twitter, read the blog, and only started paying attention today when I read your About page…

Jes: Wow…where do I start with that? <Professional voice>The Jaycees are a volunteer and leadership organization for young professionals. </end professional voice> I joined because I got to work in their haunted house, and I found an organization where I could learn project management, give back to the community, and drink beer while doing it. #love I’ve been on the board of directors for six years, including a year as my local chapter president. I’ve chaired haunted houses, haunted woods, Easter egg hunts, parades, and masquerade balls. I’ve made some of the best friends I’ll ever have. I drank some beers. I owe where I am today to joining the Jaycees.

Jes: The Jaycees are actually international – matter of fact, I had lunch with some German Jaycees just a couple months ago. It’s also a national organization, with chapters in all 50 states.  It was started in St. Louis, MO, in the 1930′s. My state, WI, was one of the charter states, and my chapter, Oshkosh, has been active since 1937.

Me: You just knew that, off the top of your head?

Jes: I did. As membership vice president a couple years ago, I got to train new members on the history of the organization.

Me: Impressive. Most impressive. That’s all I’ve got. At this point, you’re welcome to say stuff. About anything, actually.

Jes: I was just waiting for open mic to start!

Lately, I’ve been thinking about how awesome 2010 was – I really stepped up with Twitter and blogging and SQL Saturdays and SQL University, and that has paid off in a big way for me. I got the new job, working for Kimberly Clark, and I love it. No, I have not gotten any free toilet paper…yet.

Me: I so wasn’t going to ask that.

Jes: You know, no one ever asks about Kleenex. It’s always the TP….

Me: Who gives a crap about Kleenex? HAH, I kill me…

Jes: I have several exciting projects lined up for 2011. For those who follow my blog and tweets, you know I’m a runner (or insane – I’ve been called both). I’ll be tackling my first half-marathon in April. Running is my quiet, alone, thinking time. I highly recommend the Couch to 5K running plan.

Jes: I’ll be speaking at both Wisconsin SQL Server User Groups – Waukesha in February and Madison in April. I’ve submitted sessions for SQL Saturday #67 in Chicago, AND, with MUCH urging, to 24 Hours of PASS’s March women-in-tech event.

Jes: Last week, they announced that in March, the next [24 Hours of PASS] event would feature 24 women speakers because it’s Women’s History Month. I thought “awesomesauce”. I started making a list of the women I’ve seen speak that I wanted to hear again – Gail Shaw, Kathi Kellenberger, YOU…

Me: Me? Now who’s blushing…

Jes: Next thing I know, people are asking ME to submit a session for the 24HOP. Me! I really hesitated. It’s hard to go from an audience of people I know at a user group or other regional event to a potentially-international group of potentially-hundreds of people.

But I thought, what is the worst that can happen? They can reject my abstract, I cry for a day, I go for a run, and I feel better about it, then swear I’ll get in next time.

Jes: Lesson learned: the worst they can do is say no. Also, there are SO many people in the community that root for everyone to succeed. I love it.

Jes: I’m ripping up the carpeting in my house on Friday, if anyone is available to help. Free beer, and I’ll cook for you.

I’m working on my Microsoft SQL Server 2008 Database Administration 70-432 certification. I didn’t know how much I didn’t know until I cracked open the training kit book. I think this is going to be a good exercise for me: learn new stuff, test my knowledge. Speaking of that, LOVE your 365 days of BOL reading. Good idea. Crazy, but good. Everyone should try to learn something new, if not every day, at least every week.

Jes: and next on my agenda is to find the husband the Evil Dead tshirt he really really really wants for Christmas. wish me luck as i head into the wild abandon of the internet.

Me: Good luck: We’re all counting on you!