In this current article will try to see with the planning and configuration of the DCS.

Cases in which Distributed Cache service memory allocation should be increased:

2.    10% of the total physical memory is 16 GB .Reserve 2 GB of memory for other processes and services that are running on the cache host. For example, 16 GB – 2 GB = 14 GB. This remaining memory is allocated to the Distributed Cache service.

4.    Use the following procedure to update the memory allocation accordingly.

For dedicated Distributed Cache service below method can be used to determine the cache size: 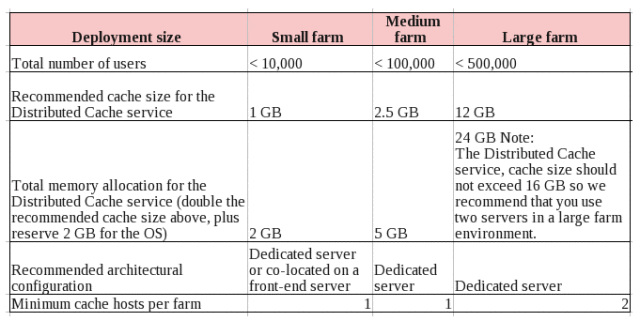 Collocated Mode: In normal or default circumstances distributed cache runs in a collocated mode and it require no extra configuration.

1) Installation of all pre-requisites of SharePoint 2013 are complete.

3) Distributed Cache required on all servers in the farm

4) Use the SharePoint Products Configuration Wizard, psconfig.exe or PowerShell cmdlets.

Dedicated mode or hybrid mode: If you need a separate cache cluster, or a set up in which some computer act as a Cache host i.e Hybrid , distributed cache can be set up using powershell command , or you can run PSConfig.exe with the /skipRegisterAsDistributedCachehost flag on all servers that are not cache hosts.

1) Installation of all pre-requisites of SharePoint 2013 are complete.

4) Use psconfig.exe or PowerShell cmdlets to configure SharePoint and use command with the /skipRegisterAsDistributedCachehost parameter on all servers that are not cache hosts.

5) Use psconfig.exe or PowerShell cmdlets to configure SharePoint and use command without the /skipRegisterAsDistributedCachehost parameter on all servers that are cache hosts.

At a later point of time in a farm if you need to change non cache host to cache host use the below command:

1) Add-SPDistributedCacheServiceInstance cmdlet on the cache host being added

Changing a Cache Host To a Non-Cache-Host

At a later point of time in a farm if you need to change cache host to non cache host due to any reason use the below command:

where GUID is the GUID of the Distributed Cache service running on the server which has to be repaired.

3) Run Add-SPDistributedCacheServiceInstance to reinstall and start the Distributed Cache service on the cache host you are repairing.

Whenever you want to increase the memory allocation of the Cache Host above the default requirement :

1) Stop the Distributed Cache service on all cache hosts on Central administration in Services on Server page.

3) Restart the Distributed Cache service on all cache hosts on Central administration in Services on Server page.

To know about latest service pack and update on SharePoint. Please refer: Link