MDX Cookbook is a popular book

I cannot believe that I have not posted any blog since May 2015! It’s been a busy few months for my co-workers and I, working on an OLAP re-design project. From the re-design of the ETL processes, to the multi-dimensional model, to building the dimensions, measure groups and cube, to the hundreds of pages of MDX calculation scripts, I’ve learned so much in the last few months. Not mentioning converting all the SSRS reports in MDX queries, which is the part I enjoyed a lot.

MDX is not the only skill that BI/data warehouse developers need, but it’s without doubt, many find that it is a very difficult skill to master. On the other hand, MDX is a pretty easy skill to pick up. Tomislav Piasevoli is a master in MDX. His insight in MDX will bring you from a beginner to an experience MDX writer. It is such a privilege for me to bring the original one in SSAS 2008 to SSAS 2012.

If your work touches OLAP, you need to know something about MDX. One BI/data warehouse developer once said to me that MDX books are so few that he bought every (almost) MDX book on the market. Among the few MDX books available, MDX with SSAS 2012 Cookbook is a popular book. While working on our OLAP re-design project, writing MDX calculation scripts, and converting SSRS reports in MDX queries, my co-workers and I often consulted the MDX Cookbook.

I encourage you to take advantage this one time discount. The 50% discount (with code MDXAS50) can only apply to the eBook version, and is valid through March 12, 2016. I know many of us still prefer the paper book. But the discount is hard to beat. 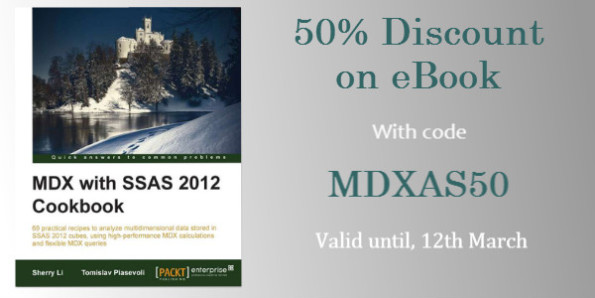