Know What Table Variables are ?

It is defined by using DECLARE keyword:

Table Variables differs from Temporary Tables in some ways stated as below:

Transaction Logs are not recorded for the table-variables. E.g., when we rollback transaction, table variable will retain its value and wont revert back to the old value.

Any Procedure with a temporary table cannot be precompiled whereas execution plan with table- variables can be compiled statically in advance increasing execution speed.

Like variables, the lifetime of Table Variables lies only within the same scope. Unlike Temporary Tables, table variables are not seenin inner stored procedures & in Exec statements. Moreover,it cannot be used in INSERT/EXEC statements.

Table Variables are used when user needs to work with small temporary data, for passing a list of values to stored procedures/functions for auditing purpose. We will discuss how the table variable functions in several areas:

When we need to pass a list of values to stored procedures or functions, it is not easy to do with the single parameters especially when the list contains many attributes. This can be fulfilled by using input parameter like XML type, but it is not advisable, as it requires more work and XML needs to be parsed in stored procedure.

With the introduction of table variable, it can be passed to stored procedures & functions as a parameter solving the above stated problem.

We will see the example of using table variables as a parameter in stored procedures. We need to define the appropriate table type before passing list of parameters.

We will assume that the dbo.UserRole table stores user-role mapping in which user can have only one role and should be updated periodically by a provided list.

We create a stored procedure that takes the updated user-role mapping as parameter & updates the table data. 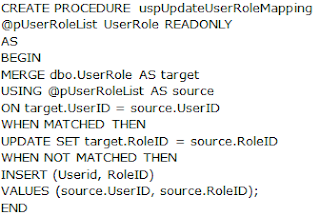 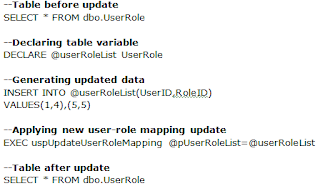 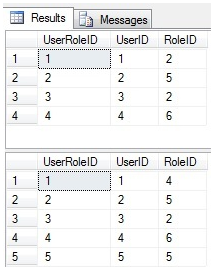 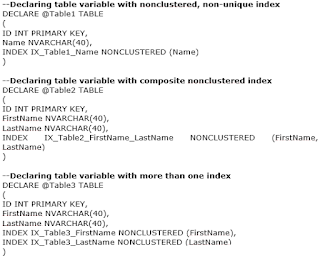 Table variable cannot be altered after its creation. Therefore, we need to make sure that we choose the right structure for the table variable and necessary indexes/ constraints are created in table definition.

We cannot use user-defined functions in the table definition. CHECK & DEFAULT constraints, COMPUTED COLUMNS can be created on table variables in definition.

While initializing a table variable, we cannot use SELECT INTO or INSERT EXEC Statements.

Table Variables can be passed to stored procedures and functions only as READONLY.

Table Variables can be of good help for users working with small temporary data as they allow passing a list of values to stored procedures/functions making development simpler. Though it provides many features of regular tables like indexes, constraints etc. but they have some limitations which are stated earlier. Table variables retain the present value after the rollback transaction that can be very useful depending on user’s requirements.