By now I expect this news is no longer new: the MCM, MSA, and renamed versions of those certifications are no longer being offered after Oct 1, 2013. The announcement was made in email, late on Friday night is the US, which was Saturday morning for those of us living in European/Middle East/African timezones.

To me the news itself wasn’t the worst part, though it’s bad enough. How the news was given was what hurt the most.

The announcement was sent late Friday evening (the sender's timezone), right before a US holiday weekend, by email.

That smacks of cowardice, of not being willing or interested in answering questions. Not offering explanations or dealing in any way with the inevitable fallout. Replies to the email resulted in an Out Of Office autoreply.

Some people have said it was like ending a relationship via text message (which I saw happen once. It wasn’t pretty). Personally I’m imagining it being more like ending a job by slipping a resignation letter under my boss’s door at 4pm on a Friday afternoon. I can’t even imagine how little respect I’d have for someone to consider doing that.

The people at Microsoft Learning (MSL) had other options. They could have delayed the mail until Tuesday morning, when there would be people in the office to answer questions, offer explanations, and otherwise act like they respected the people affected. They could have scheduled remote meetings for each of the product groups involved. After all, it’s not like there are millions of people who had to know. This would let them tell people ‘face-to-face’, with ample opportunity for questions, comment, explanations, etc.

They chose to send an email at a time that almost guaranteed there would be no explanations, no answers forthcoming for days. To say that the choice of time and medium upset people would be an understatement. The uproar has been loud to say the least. 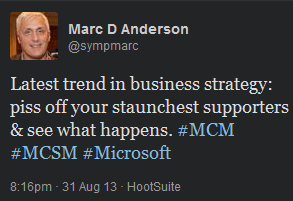 The only explanation that has been offered was by Tim Sneath from Microsoft Learning, posted as a comment on a Connect item Saturday afternoon. Nice, but that should have been in the initial email, not posted in reaction to a plea many hours later.

Additionally some of his comments do not hold water under examination.

Except those barriers were already being removed. SQL Server moved a few years back to an exam-only format where that $20,000, USA-only problem no longer existed. Back in June the same changes were announced for most of the other products (Training Optional for Microsoft Certified Solutions Master (MSCM) Certification). Those non-technical barriers to entry were already falling.

“Deciding to retire exams for the Masters program was a painful decision - one we did not make lightly or without many months of deliberation.”

“Many months of deliberation.” If that’s the case, why was there ongoing work with Prometric during those months to expand the numbers of exam centres that the exams were offered at? (Increased number of Prometric Test Centres) These centres no longer require the Redmond-based training component  and were in many different countries, substantially increasing the availability of the certification exams.

Surely if there were high-level discussions about cancelling a certification, you wouldn’t still be signing people up for forthcoming training rotations? (See George Roubchinsky’s and Jorge de Almeida Pinto’s comments on the same Connect item above). Were there really months of deliberations that apparently few to no others in MSL knew about?

“Over the next couple of months, we'd like to talk to many of you to help us evaluate our certifications and build something that will endure and be sustainable for many years to come.”

Let’s say in 6 months’ time MSL comes up with some new top-level certification. How long will it take for people to trust them again, after this little botch-up? How long will it take for that new cert to have any market awareness? The MCM was just starting to gain some traction and awareness when MSL changed the name to MCSM. And if that new certification hasn’t gained appreciable traction after a year or two, will they throw that one away as well and start afresh once more?

What does that leave us with? The MCSE as the top of the Microsoft certifications? Don’t get me started on that name. I suspect if I put MCSE on my CV I’ll have people asking me to configure routers and set up mail boxes. Then there’s the use of the word ‘Expert’, which I personally hate.

I mean, the MCSE is such a well-respected certification, surely anyone with that cert knows what they’re doing? Right?

Right. The dumps and usage thereof aren’t the sole problem, nor are the bootcamps that cram into a candidate just the knowledge they need to memorise and nothing more. The MCSE and other certifications just don’t test for technical competency well enough.

I wrote (and passed) the exam “Implementing a Data Warehouse with SQL Server 2012” during the beta-program. If you look at the skills measured, that exam covers SSIS mostly, with some DQS (Data Quality Services) and MDS (Master Data Services)

This decision, along with the recent ending of TechNet sends a poor message about just how much Microsoft values the people working with their Enterprise server products and about how much they value the people with deep technical knowledge of their products. Or maybe I should say how little.