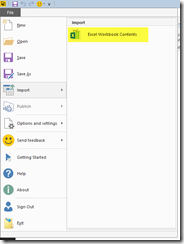 The Power BI August update just rolled out today (8/20/2015) and in the latest update there’s a lot of cool, new enhancements such as writing custom MDX or DAX queries to access your SSAS data sources, connectors for Azure HDInsight Spark and Azure SQL Data Warehouse (so awesome!), some various UI improvements and a bunch more. But one of the coolest features (and much needed IMHO) is that we now have the ability to import Excel artifacts, such as Power Pivot models and Power View reports straight into Power BI Desktop!

Go to File > Import and then select Excel Workbook Contents.

Navigate to the Excel file that contains the items that you’d like to import. In this case, I’m going to import a Power Pivot model into my Power BI model!

Now you may see a message like what you see below due to the fact that there are certain items that cannot be imported from a Power Pivot model since they’re not yet supported in Power BI.

Here are some of the items that can’t be imported into Power BI: 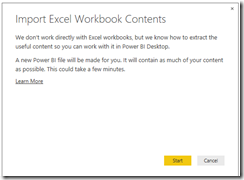 Click Start. Once we click Start, Power BI Desktop will start creating a brand new Power BI semantic model based on the Power Pivot model and Power View items that may exist in our Excel workbook. After the import is complete, you’ll see a summary of the items imported as well as items that were not imported. 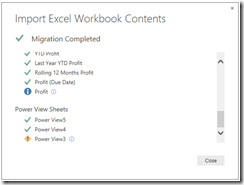 In our case we can see that a Power View sheet was not imported because it has a live connection to SSAS Tabular. We also have a Profit KPI that was converted to a measure since Power BI does not support KPIs yet.

And our Power Pivot model and Power View reports are now in Power BI! We can see our model:

We can view the data in the tables:

And we can see the Power View sheets that were successfully imported:

If you’re new to Power BI or just want an intro, start here.

Download the August update for Power BI and read about the features included.

What can and can’t be imported into Power BI?

Are you as excited about this Power BI update as I am? I know you are! leave a comment for me and let me know your thoughts!