How SQL Compilation Can Prove the Server CPU

It is relatively easy to spot CPU-bound system. But, the source of CPU pressure is not always easy to pinpoint. The CPU can be driven by many factors on the server such as;

Regardless of what caused the CPU problem, you as DBA has to figure out the reason for excessive CPU utilization in SQL Server.

In recent time, I was analyzing the health of one of the very critical OLTP SQL Server Instance. The Instance was processing 4500+ transactions per seconds. During the health checkup, I noticed the physical server was hitting the CPU continuously somewhere between 35% to 45%. As the server got massive workload, therefore I quickly verify the number of the CPUs to make sure that the server got enough CPU to handle the workload.

CPU specification – 4 Physical CPU sockets, 64 physical cores, and 128 logical cores:. This is how the CPU utilization looks like on the server.

After seeing the CPU specs, I was wondering what was contributing to CPU. So, I started figuring out all possible reasons for excessive CPU utilization. At a point, I decided to enable the perfmon counter and below is what I found. 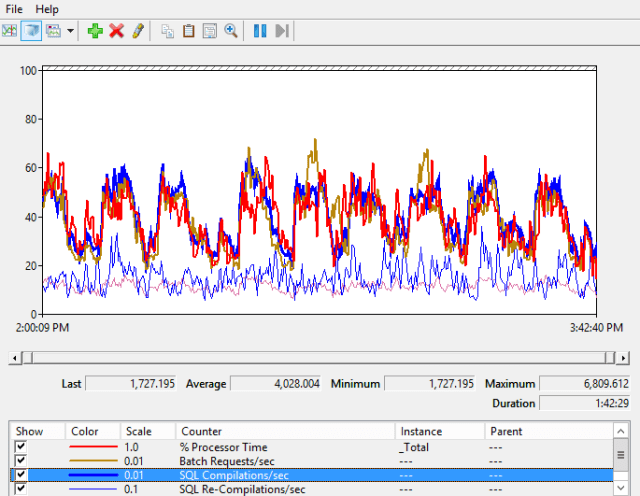 Yes! You are seeing evidence of an excessive number of query compilations in SQL Server where SQL Compilation/sec counter (highlighted in Blue) has a value that is almost similar to Batch Request/sec (highlighted in Gold).

Note: SQL Compilation should be less than 10% of Batch Request/sec.

It means every batch is being compiled before execution. We now know that the CPU utilization of the server is majority used for SQL Compilation and very little is used to execute the queries itself.

To understand the proportion of plans (ad-hoc, prepared, and other categories) in the cache, I checked cached plan profile by running the following code.

The output of plan cached profiling confirmed that the production server is experiencing typically single used plan that’s why we see 94 % of ‘adhoc’ plans in the cache. 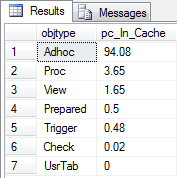 A massive 96.8% of the plans in my scenario had just a single used plan count.

To figure out the problematic queries which are bloating the plan cache and also causing high CPU, I ran the following query;

Pulling out the Problematic Queries

The output of the query indeed surprised. A tremendous number of single plans were bloating in the plan cache because of dynamic query. Kindly look the following image

If you find the same scenario in your environment, you can follow the below steps to address the problem;

I hope this blog helps you to have a commanding understanding of – How SQL Compilation Can Prove the Server CPU.

The post How SQL Compilation Can Prove the Server CPU appeared first on .