If you are a developer then surely you might have used JSON (JavaScript Object Notation) but, if not then don’t worry you might use sooner than later. JSON is kind of ecosystem which is most popular in the various area for exchanging the data. If you talk about charting solution, AJAX, Mobile services or any 3rd party integration then generally JSON is the first choice of the developers.
If you see nowadays most of the NOSQL database like Microsoft Azure Document DB, MONGODB etc. also using JSON ecosystem and some of them are based on JSON.
As it is such a popular growing system So, why not in SQL SERVER?
In SQL SERVER 2016 JSON introduced. This we can say a step or bridge between NON-relation database and relational database by Microsoft SQL SERVER
SQL Server 2016 providing following capabilities when you are using JSON
If you see it then conceptually it is similar to XML data type which you might use in SQL SERVER.
The good thing  in SQL SERVER 2016 for JSON there is no Native data type.  This will help in migration from any NOSQL to SQL SERVER.
SQL server provides bidirectional JSON formatting which you can utilize in a various way. Suppose data is coming from the external source in the JSON format then you can parse it and store in table structure (if required) in another case external source require data in JSON format while data in SQL SERVER in tabular format so both the purpose can easily solve with  SQL SERVER’s JSON feature.
Now, let’s jump directly to the practical to check JSON capabilities in SQL SERVER
1) FOR JSON AUTO
It is similar to  FOR XML AUTO.  It will return JSON object of selected column where column name is treated as a Key or in other words we can say it will format the query result in JSON.

when you run above command the result will be like as shown in below figure.

2) FOR JSON PATH: -
It’s exactly like JSON auto the only difference is instead of SQL SERVER we have full control over the format. JSON Auto take predefined column schema while with JSON path we can create a complex object.
For example, we are using AdventureWorks Sales order table and joining that with product table to get sub-node. If you see in below image we have added Root node as well. This root Node can be added in JSON auto as well if required.

Now, when you run the above query we can get complex JSON object as follows 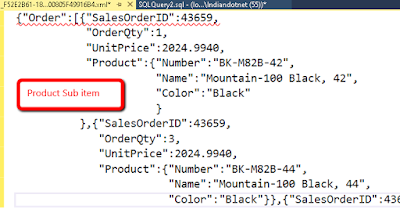 3) IsJSON function:-
By the name, it is clear that this is a validating function.
To cross check whether the provided string is a valid JSON or not we can run ISJSON. 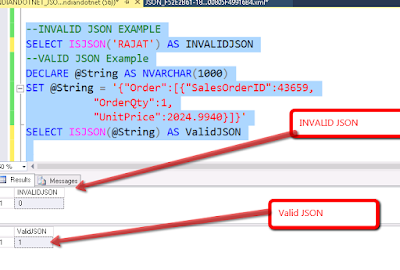 4) JSON_VALUE:-
By the name, it is clear that if you want to get the value of the particular key of JSON then you can use this beautiful function which is JSON_VALUE.

5) OPENJSON function:-
This is a very beautiful function which you can use to parse external schema. Suppose, you got a JSON string from a mobile service which you will directly pass to SQL Sever and SQL SERVER stored procedure will do rest of the operation to parse it. The parsing and other operation can be easily handled by OPENJSON. The only tweak here that it required database compatibility level 130   which you need to do (if not compatible with level 130)

There are many other interesting things which we will cover later.
Please, provide your inputs.
RJ