So, to do the name “blog” justice, I should post something every now and then. Alright, here you go, let me recap where my speaking gigs have taken me during the first six months of 2018.

February saw this year’s edition of SQLBits happening in the Olympia in London. I had submitted a couple of sessions, and my newest one “50 ways to show your data” had been selected. I was happy, yet it was a bit scary to think I’d present at, well, the biggest SQL event we have in Europe. I had asked for a Saturday session, and they put me in the very last time slot, so plenty of time to get acclimatized to the venue and everything. On Friday night my wife and I attended the big SQLBits “magic” party, a stunning experience with lots of performing artists and Harry Potter lookalikes, food and drinks.

Saturday I knew wouldn’t be one of my best days, as the hotel bed and some distant noises had given me a hard time finding any sleep. So, after breakfast I returned to the room, rehearsed my presentation one more time, and made my way to the venue around Lunch time. I strolled around the venue, met a couple of friends and acquaintances, but there were at least as many of them I missed to see. My presentation went alright, at least that’s what the majority of my 32 attendees said in the evaluations. Thanks again for coming, and – I’ll improve on my intonation for the next time!

Only two days later it was already time for the SQL Konferenz in Darmstadt, Germany’s event of the year when it comes to the MS data platform. This year’s speaker dinner was held on Monday in the Darmstadtium’s restaurant, so that all of the event was in lazybones’ distance to the recommended hotel, which shares the underground garage with the venue.

I also enjoyed the party for everyone on Tuesday night and presented my “Journey through the Tidyverse” session on Wednesday.

Going to SQLSaturday Iceland in March was very special, as I like the Nordic countries very much, but had never been to Iceland before. So, my wife and I made this a slightly extended trip, going from Thursday to early Tuesday. We took a rental car, stayed at “Eric the red” guesthouse near the famous Hallgrims church, and did the touristy things you’d expect from first-timers, like the Geysir and the Gullfoss waterfall. My introductory R talk presented in Reykjavik University was even attended by fellow speaker Dejan Sarka (t)! We topped our stay off by a visit to the Blue Lagoon on our way back to the airport. Big thanks to Ásgeir Gunnarson (t) for organizing and for having me as a speaker! This visit to your country was one amazing experience!

Admittedly I don’t get around to other local PASS groups too much. But in April I followed Tillmann Eitelberg’s (t) invitation to present my “50 ways” to the folks at the Rheinland group, in the Microsoft office in Cologne. 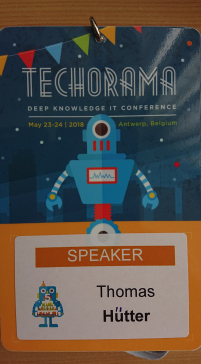 In May I had the pleasure of attending two events, each taking place in a cinema center: first, Techorama Belgium‘s 5 year anniversary in the Kinepolis Antwerp. An event not only for database folks, but also for developers and IT professionals in general. I found it very well organized, from the communication up-front and the speaker’s gift box in the hotel room to the shuttle buses and the variety of food during those two days. They had me present my “50 ways”, in parallel to Grant Fritchey’s (b|t) session – something that seems to happen every time we speak at the same conference.

End of May I flew to Copenhagen for the Intelligent Cloud Conference, a new event focusing on the Microsoft Platform around Azure, AI, Analytics, BI, IoT and SQL. I gave my “R primer for SQL folks” session as an ‘opener’ for the AI/Data Science track and enjoyed two days of Danish surroundings, Danish design and Danish food. Did I already mention I am fond of the Nordics…? Mange tak to Jens Vestergaard (b|t) for pointing me to the call for speakers for this one!

My “home Grand Prix” SQL Saturday Rheinland took place on June 9th in St. Augustin near Bonn. Speakers dinner was in a nice, but rather remote place, that allegedly couldn’t be reached by car. To find the nearest car park was an adventure of it’s own, we zigzagged our way through Königswinter, and we didn’t find out if Tillmann just wanted to show us the nice surroundings or if he couldn’t get his SatNav to work properly. For the remaining ca. 2 km it was walking up a slope of 20° in 100% humidity. I’ll spare you the details… Saturday itself went flawlessly and just was over much too soon.

The amazing SQL Grillen event in Lingen/Emsland topped off the first half of 2018 (and started our summer vacation). Brought to life by the wonderful “Yorkshireman in the Emsland” William Durkin (b|t), what had started as a user group anniversary is now a full two-day event under the motto “Databases, Bratwurst and beer”. And with 3 precons and 35 sessions, it even beats some of the SQLSaturdays I have been to. This was my second time as a speaker, and again the event was superbly organized by William and his team, who took care of hotel bookings, shuttles to the speaker dinner and just about everything else. With internationally renowned speakers from the US, UK, Iceland, Norway, Sweden, Belgium, Holland, Italy, Portugal, Slovenia, Israel and Germany (I hope I didn’t forget anyone!) this really felt like one big #sqlfamily reunion again! I didn’t see anyone not enjoying themselves, and the socializing over some beers went on until well past 10 o’clock in the evening. Just the session planning… you guessed it, Grant and I were in the same time slot once again!

See you on the other side of SQLSatParis.