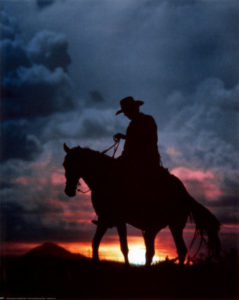 The cowboy’s job is done here, and it’s time for him to move on to the next adventrue. The lonely prairie wanderer moves onward, always moving forward. Never looks back, never catches one last fleeting glance. This adventure is over. and it’s time for something new. The wanderer wanders on into the sunset.

I joined Microsoft as a contractor in 2007. I worked as an operations engineer on the TS&E Operations Team (I don’t recall what TS&E stood for). Then our team was “re-org’d” and split into three parts in three different groups. The part I was in was then “phased out” and all of the applications we managed went into sustained engineering mode which is a nice way of saying our jobs were outsourced.

One of the other sections of our group had gone on to become a very strong team doing development for a critical application known as CAP (Customer Assistance Portal). As the old team was dying, I joined the development team of the other group. I was brought in to work on their architecture and performance engineering (APE) team. The CAP application had been brought back into Microsoft (it had been in “sustained engineering” for a few years. Our first charter was to improve performance of the application so that it would make it through another holiday season that year. Our second charge would be to rearchitect it for sustained growth. In short, the application was originally written to be used by 20 people and it now needed to handle a load about 10,000 times it’s original load.

Our holiday performance project for CAP was a huge success. The CAP development team fell under the PQO (Product quality & Online) group. They decided to bring operations for CAP under PQO as well, and I was offered a full time employee position with PQO Operations to take over as Sr. Operations Engineer for the CAP application. We had an operations team of 8 to 9 managing this application and its associated BI application. The CAP operations transition was another huge success.

As a stipulation of accepting the CAP operations position, Microsoft agreed to send me through the Certified Master program whcih I did in March of 2010. After the success of CAP, I was made the technical lead of the SQL Virtual Team for PQO Operations. Our purpose was to educate our fellow operations engineers, most of whom were not DBAs, and to provide DBA services to the various applications managed by PQO Operations. Again, this was a huge success.

When i heard that Joseph Sack was moving on, I jumped at the chance to lead the SQL MCM program in his place. I have been in the role of Project Manager for the SQL MCM program for less than a year now, but an offer came along that was too perfect for me. I simply could not turn it down. When a position that is this ideal for you, you have to realize that this is something rare. I had no plans to leave my role as PM of teh MCM program in the foreseeable future, but this offer was just too good.

So with this, I say goodbye to Microsoft. Time for my next adventure. I will officially ride off into the sunset on Friday, March 30th.