It is very common to see in a relational database that stored procedures are using many Tables, Views, Sequence Object, Stored Procedures, Functions, or many more to process the business logic. If you happen to work on a Stored Procedure performance issue which referenced many objects, you might end up asking yourself – “Is the SP itself running slow? or it is poorly performing because of the other referenced objects like functions, stored procedure, or many more.”

In this tip, I am going to share a useful script. You can use the script to check Stored Procedures have referenced which all the objects.

For example: The above script has been executed against “WideWorldImporters” database to check the SP “InsertCustomerOrders” has referenced how many tables, functions and SO. 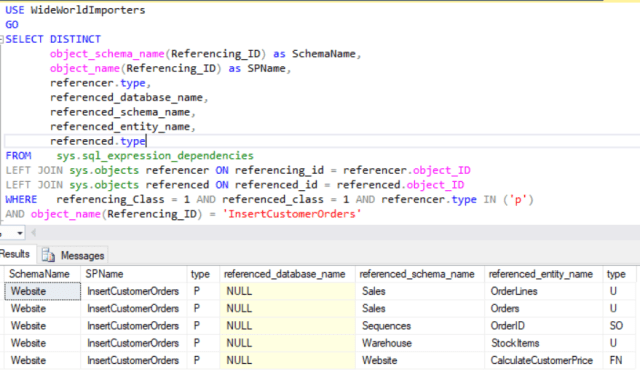 To get the complete name of the Object Type, you can refer the below list;

I hope you find it helpful during figuring out referenced objects in Store Procedures.

The post Determine Referenced Objects in the Stored Procedures appeared first on .