Deploying a stand-alone SQL Server Instance into a Kubernetes Cluster

(Be sure to checkout the FREE SQLpassion Performance Tuning Training Plan - you get a weekly email packed with all the essential knowledge you need to know about performance tuning on SQL Server.)

One of the greatest things about Kubernetes is the possibility to perform upgrades and rollouts of software components in a coordinated, reliable way. If you have SQL Server running in a Kubernetes Cluster, it is a very simple talk to update SQL Server to a newer version. If something goes wrong, Kubernetes is able to perform an automatic rollback to the older (working) version. Antony Nocentino has blogged about this possibility a few days ago.

Another big bonus point for running SQL Server in Kubernetes is the possibility to restart a pod (which hosts the SQL Server Container) in an automatic way when the pod (or the Kubernetes node) crashes. I will talk more about this possibility (and its side-effects) later in today’s blog posting.

You can retrieve the available Storage Classes with the following command:

In our case I want to create a new Storage Class with a few specific additional parameters. The following listing shows the YAML file that describes a custom Storage Class for Kubernetes.

You can deploy this custom Storage Class with the following command into your Kubernetes Cluster:

When you afterward check again the available Storage Classes, you can see the newly created one:

You can deploy this Persistent Volume Claim with the following command into your Kubernetes Cluster.

The requested persistent volume is not yet created, because the used Storage Class has specified the volumeBindingMode with WaitForFirstConsumer. Therefore, the persistent volume is created when the first Pod requests it. That’s the reason why you see in the previous screenshot the status of the Persistent Volume Claims as Pending.

Deploying a SQL Server Instance into the Kubernetes Cluster

As you can see from the YAML file, we are requesting here 1 replica (one running instance of SQL Server) of the SQL Server 2019 CTP 2.3 Ubuntu Docker Image. 2 very important things here are the entries volumeMounts and volumes. With these 2 entries we are mounting the 5 GB persistent volume into the folder /var/opt/mssql of our SQL Server Docker Container. And as you can see here, we are referencing the persistent volume here through the previous created Persistent Volume Claim.

Everything else is straightforward in that YAML file: we specify the necessary environment variables and the Container Port 1433 that is used for the communication with the SQL Server service itself. You can deploy that YAML file with the following command into your Kubernetes Cluster:

As soon as you have executed this command, a lot of different things are happening in your Kubernetes Cluster:

You can see the deployed pod with the following command:

If you want to see all the previous mentioned steps that happened during the creation of the pod, you can use the following command (you just have to specify the correct name of your pod):

As you can see from the screenshot, a persistent volume was attached to the created pod. You can also see that volume with the following command:

If you look into the Resource Group of your Kubernetes Cluster in the Azure Portal, you can also see the underlying disk that was created for this Persistent Volume.

By now we have a running and working SQL Server Instance deployed to a Kubernetes Cluster. But how can you access this SQL Server? Currently you don’t have any public IP address on which SQL Server is listening for incoming requests. Therefore we have to deploy a so-called Service into our Kubernetes Cluster. The following listing shows a YAML file that describes a Service API object with which we are able to access SQL Server from the outside.

Let’s deploy this Service with the following command:

When you take that IP address and use it to connect to SQL Server, you can see that the SQL Server Docker Container is running on our pod – in the Kubernetes Cluster! 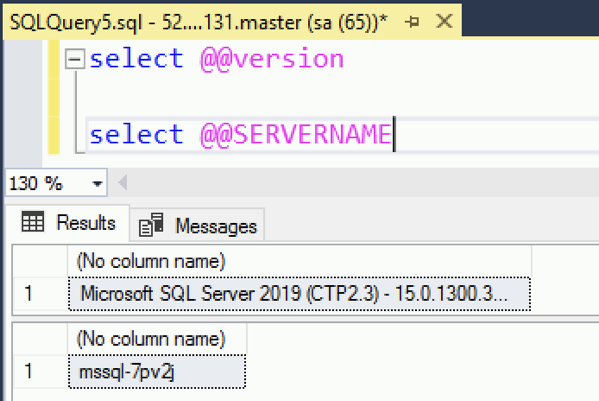 In the beginning of this blog posting I have talked about the various advantages running a single instance of SQL Server in a Kubernetes Cluster. One of the advantages is that Kubernetes always makes sure through the ReplicaSet that the requested amount of pods are always online, healthy, and available. In our case we have requested in the ReplicaSet 1 pod, therefore 1 pod will be always available.

Our pod is gone! If you check the number of pods again, you can see that Kubernetes itself has triggered the creation of a new pod:

And after some time that pod will be again in the Running state. The great thing about that is now that the Persistent Volume of the old pod was attached to new pod, and therefore we haven’t lost any data! If you have previously created a new SQL Server database, that database will be still accessible with the new pod. That’s the idea of Persistent Storage in Kubernetes. You can also see with the following command that the Persistent Volume was reattached to our pod:

So far, so good. In our case we have deleted the pod in an imperative way. But what happens if we completely shut down the VM that currently hosts the Kubernetes node on which our pod runs? In that case Kubernetes will also detect the difference between the Desired and Actual State and will schedule a new pod on a different Kubernetes node. Let’s try that by just shutting down the correct VM through the Azure Portal.

More or less we have now crashed our whole Kubernetes deployment! It seems that attaching a Persistent Volume to a new pod is currently not really supported/implemented in Azure Kubernetes Services, when that volume is already attached to another pod. Bad when that pod is not available anymore.

If you check your pods, you can see that the old one is in the Unknown state, and the new one is forever in the ContainerCreating state.

To be honest: that screws up everything! The idea behind Kubernetes is a self-healing system which constantly monitors through the various Reconciliation Loops the Desired and Actual State. With that behavior Azure Kubernetes Services violates that principle.

But to be honest: the whole Kubernetes integration doesn’t really work currently. I have already blogged about the various problems that you have with Availability Groups, and today I have shown you that even a simple Standalone SQL Server Instance can’t be run in a reliable and high available way in Kubernetes. Currently it is so easy to just crash everything…

I also have to thank Andrew Pruski and Anthony Nocentino, who helped me to understand this bug, and to confirm it. Thanks guys! And there is also another blog posting, which describes some other limitations of Azure Kubernetes Services that you have to face currently…

If you want to learn more about SQL Server on Linux, Docker, and Kubernetes, I highly suggest my upcoming Live Online Training on May 13 and May 14, where I will do a more technical deep-dive about all these exiting new technologies that will change our life as SQL Server Developers and DBAs over the next years.

Thanks for your time,