Currently, User are using TDE or 3rd party software only to encrypt there database backups. This feature is going to reduce your complexity.

2) Native backup encryption available only in Standard, Business Intelligence and Enterprise Editions. Web and Express edition does not supported this feature

7) Appending new backup file to an existing backup set is not supported for encrypted backups. If you try, you will receive below error.

The backup cannot be performed because ‘ENCRYPTION’ was requested after the media was formatted with an incompatible structure. To append to this media set, either omit ‘ENCRYPTION’ or create a new media set by using WITH FORMAT in your BACKUP statement. If you use WITH FORMAT on an existing media set, all its backup sets will be overwritten.

If we try to open backup file in notepad, we can see actual data is visible & that can lead to data theft threat.

But data in Encrypted backup files is not readable.

How to check which backup set is encrypted ? :-

1) You need to look into BACKUPSET in MSDB about encryption

2) No change in RESTORE HEADERONLY, so you will not get any information about encryption in HEADERONLY 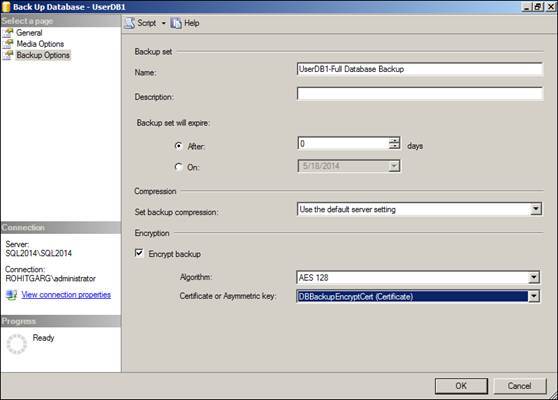 1. Scenario 1 – Server on which Encrypted backup going to restore has Master key & Encryption certificate. No Change is restore steps either from script or GUI required.

2. Scenario 2 – Server on which Encrypted backup going to restore, Master key & Encryption certificate does not exists

It’s not possible, You will get below error.