Be Cautious About Invoke-SqlCmd Bug

With PowerShell becoming more popular in daily DBA work, I’d like to mention one huge ugly bug I recently encountered to, IMHO, an corner-stone cmdlet in SQLPS module, invoke-sqlcmd.

I mentioned this here http://stackoverflow.com/questions/33271446/invoke-sqlcmd-runs-script-twice (and also in MS forum)

Ok, in PowerShell, now let’s just run two t-sql statements, one insert into each table, with the 2nd statement firing an error (I purposely make it error out by not populating the primary key column)

Now you will see the following error

Now, if we check what is in table dbo.s, by select * from dbo.s, we will see two records instead of the expected one record as shown below 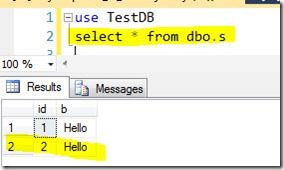 To me, this bug alone will stop me from using this invoke-sqlcmd, yet without which, SQLPS seems crippled in many cases.

When I try to report this as a bug in MS Connect, I find someone has reported a similar issue before in 2013, yet, MS closed it as “Won’t Fix”, I guess this is another bad decision from some PM who really did not appreciate the importance of this bug.  The MS connect item is here

I hope those DBAs who are keen on using SQLPS, please vote it up to let MS change their weird previous decision.

Once SQL 2016 is RTM’ed, I will test it again and see how it goes and report back here.