make your life harder for no good reason! This week is a fairly simple one -

which means it should be easy to prevent. Spaces in object names. SQL supports

them of course, you just put the object name in brackets, like so:

Does it really matter? It works after all and isn't that the main thing? Yes,

I'll grant that the fact that it works is worth something. But I do think it

matters. I spend a lot of time in Query Analyzer and it's hard enough to get the

A, put brackets around every object name, or B, remember which objects have

just adds visual noise. More to my point, why would you need spaces in

In an effort to avoid problem with spaces, Query Analyzer defaults to putting

brackets around everything, as this script shows:

You can turn the bracket generation off (today's QA tip) by clicking Tools,

Options, then selecting None under identifier delimiter: 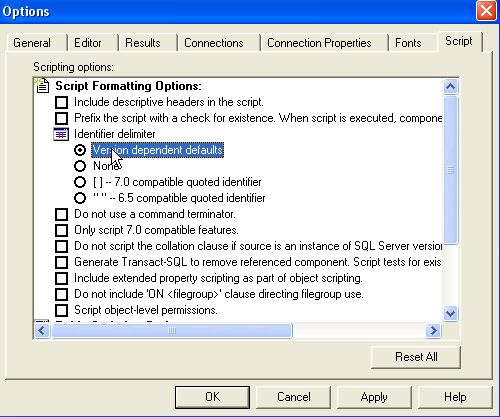 names? I vote for complaining to start with - maybe if they hear it enough

they'll change! In practice I'd say you pretty much have to live with it, not

worth the effort to change. What you can do to make your own life easier is to

create views that alias columns so that they don't have spaces. Again, I'm not

Listen, I know this is a small thing and fairly trivial. The problem with our

line of work is a lot stuff is trivial until you start to combine them. Compare

every worst practice implemented. They both work, but one is soooo much easier

to work with. The nice part about trivial things is they ARE easy to change. Put

out the word - you're just saying no to spaces!

Adding a column is one of the simpler tasks you'll ever do as a DBA, yet danger lurks! All too often we add columns without going through some type of check list to make sure we're safe. What could adding a column break? You might be surprised!

Worst Practice - Not Having An Archive Plan For Each Table

We're curious to see what our readers have to say about this one! How many of us have tables accruing data that won't be used and/or isn't of any value? At what point do we get rid of it to free up resources?

If you've been with us for a while you know that Andy started a series last year on worst practices. As he says, maybe you can't always do best practices, but at least dont do the worst ones. Read the article and add a comment, participate!

In this article by Neil Weicher, he talks about encryption of data and files for SQL Server.