Windows Server 2012 Deduplication – Should you use it with SQL Server Backups?

Windows Server 2012 introduces native deduplication functionality. My first reaction on hearing about this feature was to wonder whether it was viable for SQL Server database backup files. Certainly I would expect volatile databases to have less opportunity for space-saving deduplication, but for the more static databases I can certainly appreciate the potential for deduplication space savings.

I will be describing my informal, preliminary testing process and observations in this article. While this is a promising new Windows feature for other file types and characteristics, I do think there are some potential pitfalls that you need to be aware of when it comes to deduplication specifically for SQL Server backup files. I’ll explain why I think this towards the end of this article.

First of all, to configure Windows deduplication functionality, I added it as a server role via the “Add Roles and Features Wizard” (this functionality is nested under File And Storage Services \ File and iSCSI Services \ Data Duplication). 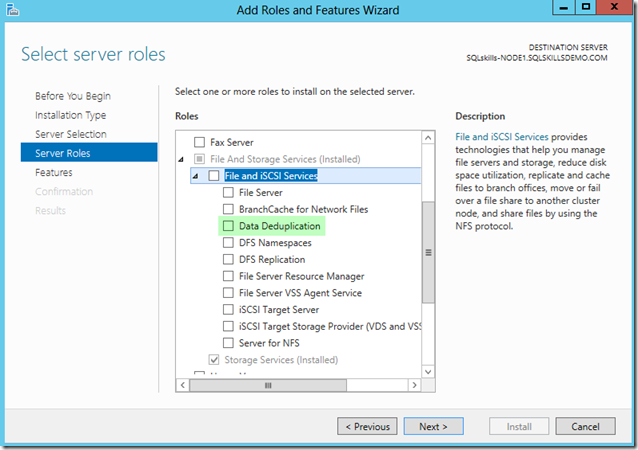 Adding this feature also meant that I was installing the parent features in the hierarchy. 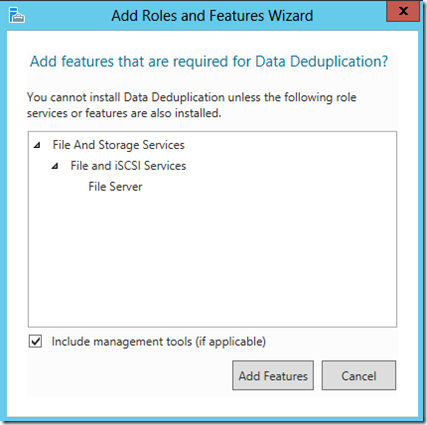 It was also noteworthy that for my test virtual machine, installing this feature didn’t require a reboot.

On my test VM, I provisioned a dedicated “T:” drive that I would use for storing local SQL Server database backups, isolated from files on the other drives.  Then to enable data duplication for the T: drive, within Server Manager I right-clicked the volume and selected Configure Data Deduplication. 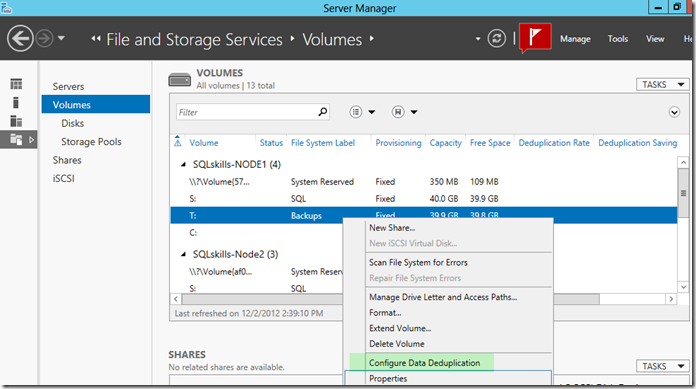 In the Deduplication Settings dialog box, I checked the Enable data duplication option. 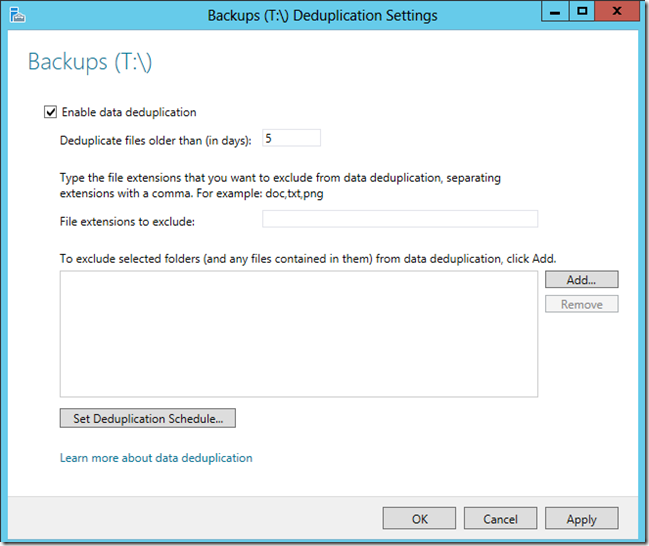 Now for a quick test in SQL Server 2012, I created ten separate but identical full database backups of the Credit database (without using native backup compression). Now of course, depending on the database we would normally expect incremental changes over time that would translate to reduced duplication opportunities, however I wanted to measure the “perfect world” scenario in order to understand overall potential. This would help me understand the high watermark for potential deduplication savings:

Each file was 160,864 KB. I then executed the following Powershell cmdlet from the deduplication Cmdlet library to manually kick off a deduplication job on the T: drive:

Then to periodically check the status of the job, I executed:

The job took about two minutes. I could see a progress percentage and once the job was finished, Get-DedupJob no longer returned a result set.

I then checked the overall status using:

What was interesting was the “11” files being reported, even though there were only 10 files on the T: drive.  I then remembered that my original Credit backup was in my Recycle Bin and I went ahead and deleted it permanently.  This didn’t cause the status information to be immediately updated, so I executed the Start-DedupJob cmdlet with the GarbageCollection type:

Checking the status, I saw revised file counts to the actual 10 files on the T: drive. The new space savings was as follows:

What if my backup files were compressed via SQL Server backup compression? Would I still get as pronounced amount of saved space?

I deleted the existing backup files and reran the ten full database backups using the COMPRESSION backup option instead of NO_COMPRESSION. This time 10 separate backup files were created sized identically at 54,077 KB (versus the original 160,864 KB) on the T: drive.

As before, I manually started the deduplication task via the Optimization type and after a minute I checked the status via Get-DedupStatus:

The ten files took an original 769 MB and the saved space amounted to 473 MB – so a 61% space savings. Not as high as the 82% but still an excellent space savings for identical files.

What about database backups with Transparent Data Encryption enabled? I tested this as well (with NO_COMPRESSION given that TDE was enabled for the Credit database). Each identical TDE database backup file was 160,864 KB in size and the deduplication rate was 77% across the 10 files versus 82% for the non-TDE database). So there was still significant space saving.

This is definitely a promising new feature, although one’s mileage will vary based on the redundancy within the files you wish to deduplicate. New transaction log files have inherently different activity – as would the associated full database backups when a significant portion of data is modified between generations. In a production system, I expect much lower space savings for volatile databases – but for those relatively static databases that still get frequent backups, I would still expect some good space savings.

So should you actually use this technology with SQL Server backup files? In my opinion, there are a few areas that you should watch out for:

Microsoft has a deployment page here that helps walk through some of the considerations –> Plans to Deploy Data Deduplication.  Space savings can be pretty significant, but as you noticed I tested this for SQL Server full database backup files and not SQL Server database files themselves, which are not supported according to the deployment guide.  That deployment guide states “Deduplication is not supported for files that are open and constantly changing for extended periods of time or that have high I/O requirements, for example, running virtual machines on a Hyper-V host, live SQL Server databases, or active VDI sessions.”  This non-support of database files makes sense to me, and I think there are still significant benefits to this Windows Server 2012 feature, just not for SQL Server purposes.

“But I don’t need to back up that database.”

Brent Ozar shares four stories of people who thought they could avoid backups - and got burned.

Are you using Ola Hallengren's Maintenance Solution? Here's a Python script that helps you keep track of your backup file inventory.

Learn how you can easily spread your backup across multiple files.

Get a report of backups older than 60 days.

Backup to the Cloud: The Silver Lining

Offsite backups are vital to data integrity, allowing for preservation and backup of data in catastrophic circumstances. Cloud backups have been around for a while, but are now really coming into their own. Tony Davis looks at how to get set up with cloud backups for restores and disaster recovery.