Recently, a project required that after downloading data from AS/400 tables to load a data warehouse,

a table in AS/400 be updated with the time stamp to indicate when the load process started and when it completed. These time stamps are then used by the nightly AS/400 process to determine the data for the next load. The data warehouse load process used to be a Java application and the project charter was to eliminate the Java program and move the entire processing to SQL Server 2000 and make use of the linked server to AS/400. The Java program used to read the data one row at a time per table and then either insert or update based on the Add/Update indicator. Obviously it was a slow process.

Here are some details on the new linked server setup:

using the iSeries Access ODBC Driver. Using the DSN, a linked server named AS400 is defined on the SQL Server to connect to AS/400 tables as show below with proper security configuration. 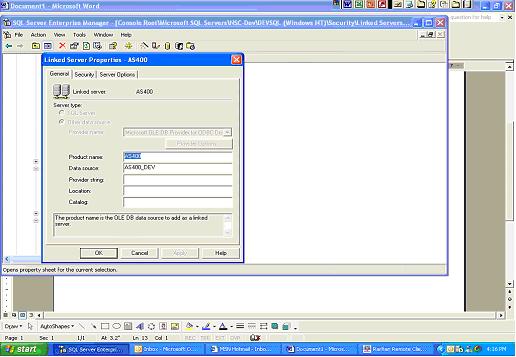 Now it is easy to refer to AS/400 tables using the four part naming convention and get data from the AS/400 tables. Here is an example:

But when you try to update a field in the AS/400 table, with a statement such as

the following error was encountered though the user was given CHANGE authority to that file in AS/400.

The search on the web returned thousands of results indicating that many people were having issues updating AS/400 tables, but in many cases there were no responses and no complete solution was available. Finally, I ended up on a page that had some useful information. The link to that page is given here.

The alternate solution suggested was to use a DTS package with an ODBC connection to AS/400 and executing the SQL statement to get the update done. The following screenshot shows the details of the DTS package: 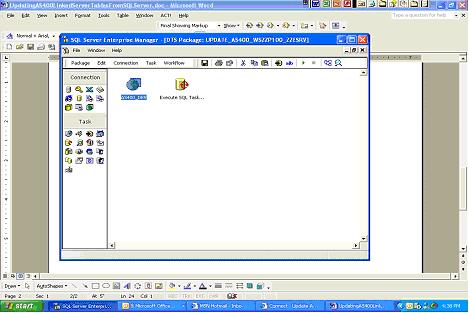 The AS/400 connection is defined as other ODBC connection as shown below: 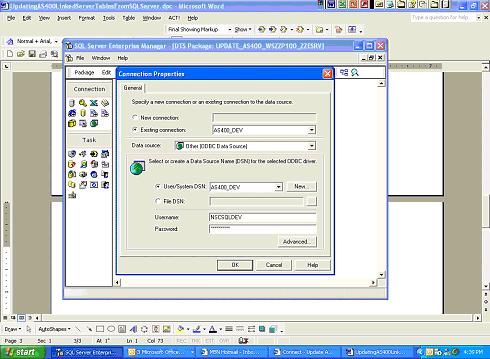 The Execute SQL task has the update statement as shown below: 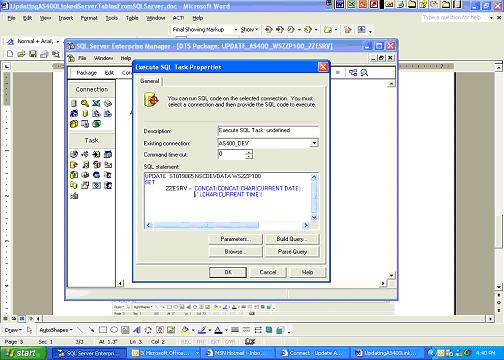 Here is the actual statement for clarity:

Please note that once the connection is set to AS/400 in the execute SQL task, TSQL is no longer valid and the SQL

statement needs to conform to the IBM DB2 SQL standards. Here is the link for

was created and executed from the stored procedure when the load process was complete.

Apparently there is no valid reason why the AS/400 linked server tables cannot be updated, deleted or inserted from SQL Server. The experts at

Microsoft and IBM can work on that problem. It would be interesting to see whether this issue is resolved in

SQL Server 2005. Meanwhile, it is always good to have an alternative approach in the tool bag to get the job done.

Haindong Ji brings us part 3 of his series on Oracle and SQL Server interoperability, this time taking a look at the Oracle Instant Client.

Have you ever had to access data from either a non-SQL Server source or from a separate SQL Server database (either residing on the same instance or on a separate instance)? Rahul Sharmas discusses how to bridge the gap between two different SQL Server instances or between heterogenous RDBMS such as SQL Server and Oracle: Use linked servers!

SQL Server is the best RDBMS, at least according to the current thinking at SQLServerCentral.com, and is fully capable of meeting all of your database needs. However not all database systems run on SQL Server and it seems that we often see data from some other system being consolidated on SQL Server for additional processing or reporting. DTS usually handles the load, but there are times that you might want create a linked server to an Oracle system for updating individual rows. New author Adria

An Introduction To Linked Servers

Linked Servers are an interesting technology in SQL Server to allow remote access from within the database to external data sources. They can be a boon in a heterogenous environment with other Oracle, DB2, etc. data sources. But they can also help in a smaller scale against those "hidden" datasources like Excel or Access. New Author Krishna.