We have two SQL Server clusters (ServerA and ServerB). Both are installed with SQL Server 2008 R2 (Enterprise). The two SQL instances have an identical database called “MyDatabaseA”, and Peer-to-Peer replication is configured between those two SQL instances, for some of tables within “MyDatabaseA”. This allows records to be replicated from one server to the other, and vice versa. This cofiguration has been working properly for quite awhile.

Due to new application development, we needed to add extra columns on one of the replicated tables (For example: ALTER TABLE MyDatabaseA.dbo.MyTable ADD NewColumn int). Because of Peer-to-Peer replication, we are supposed to only initiate this and add the new columns on only one of SQL instances. The schema change should then be replicated to the other SQL Server instance automatically. This should be very straight-forward, and we have done it many times in the past without any problem. However, for some reason, it didn’t work as expected this time. Here was the situation:

We had no idea what the problem it was. Accordingly to Microsoft Book Online, Peer-to-Peer replication must be able to replicate schema changes on both sides, and that can’t be disabled. Just to make sure, we then double checked the publication properties, and the Replicate Schema Changes setting is set to “True” on both SQL Server publications, which is the required setting for Peer-to-Peer replication (shown in Figure 1 below). 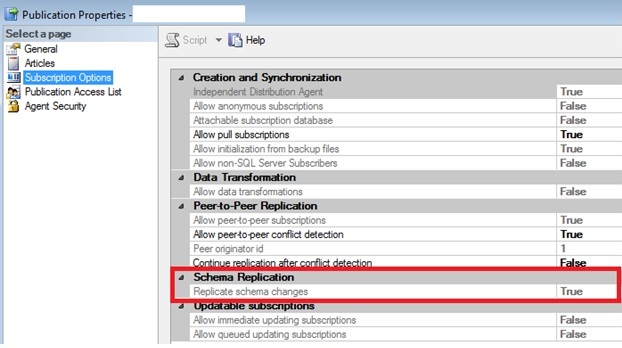 Because this is a non-production environment, we first tried the easy way; we dropped and recreated the Peer-to-Peer publication and subscription for “MyTable”, hoping the issue could be resolved quickly, but it wasn’t.

Is it possible there was something wrong with that specific “MyTable”? We tried to add other columns on another table within the same database, but the result was still same as that of “MyTable”. That is the schema changes COULD NOT be replicated to ServerB if we initiated the changes on ServerA, but COULD replicate successfully to ServerA if we initiated the same changes on ServerB.

This is weird. Why do the Peer-to-Peer schema change only work in one direction? We decided to have another try on a table within a different database, in this case “MyTableB” within “MyDatabaseB”. Replication worked. The schema changes were replicated from both ServerA to ServerB and from Server B to ServerA.

So, we concluded there must be something wrong with “MyDatabaseA”. We then tried to compare all the database settings on MyDatabaseA between ServerA and ServerB, but saw no differences. The settings were all the same. We were kind of stuck. We also tried to google for similar issues on the internet, but had no luck. 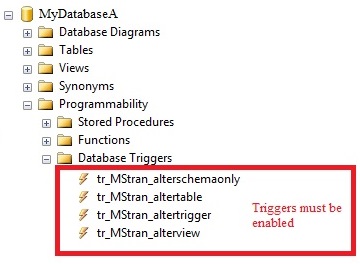 Changing a replicated table in SQL 7 was a lot of work. SQL 2000 offers some help, but in many cases it's not enough. This article by Andy Warren shows you which changes SQL 2000 will help you with and which ones it won't.

In this product review Andy takes a look at Data Compare, the second of three products in the SQL Bundle available from Red-Gate software. It's a very handy program that lets you compare data between two tables and optionally generate sql statements to syncronize the data. An interesting alternative to replication!

This paper examines performance in transactional replication and demonstrates ways in which you can improve the performance of your applications. (30 printed pages)

Strategies for Backing Up and Restoring Transactional Replication

Microsoft® SQL Server™ 2000 allows you to restore transactional replication databases without reinitializing subscriptions or disabling and reconfiguring publishing and distribution. You can set up replication to work with log shipping, enabling you to use a warm standby server without reconfiguring replication.

How to Use the Windows Synchronize Manager with Pull Subscribers

If you have Microsoft Windows 2000 or Microsoft Internet Explorer 5.0, Pull subscribers can use the Windows Synchronization Manager (WSM) to synchronize with the publisher.