Recently I decided I wanted to write an article concerned with SQL Server Integration Services 2005 (SSIS) for publication on SQLServerCentral.com and was trying to decide what the content should be. Checkpoints, event handlers, the new expression language, Foreach Loop enumerators, fuzzy matching, package migration… loads of possibilities and all things that I hope to explore in the future. It occurred to me however that much of the audience for this article wouldn’t be able to relate to it because they hasn’t yet used or even seen SSIS; they would have no frame of reference.

For this reason I figured an article introducing the fundamental concept of SSIS would be more useful to existing users of Data Transformation Services (DTS), for that is the product that SSIS is replacing. There have been a few high level articles up to now about some of the new features of SSIS but I wanted this article to delve deeper into the detail and explore the fundamental differences between SSIS and DTS from an ETL developer’s perspective.

In my opinion the biggest fundamental difference between DTS and SSIS is that in the latter workflow management has been separated from data manipulation. This is a key paradigm shift and is what I want to try and illustrate here.

In DTS these 2 very different concepts of ETL were built in the same place, on the same design surface. The following screenshot illustrates this.

DTS users will recognize what we have here.

Data pumps are data manipulations and precedence constraints form the workflow of a DTS package. As stated these are both built on the same design surface.

Now let’s look at what this would look like in SSIS. Each of the data manipulations would be built separately in the data-flow designer which would, in effect, give us 4 different objects that we can place into a workflow.

First we have a data-flow called “Load DIM_PRODUCT” that populates our DIM_PRODUCT table. 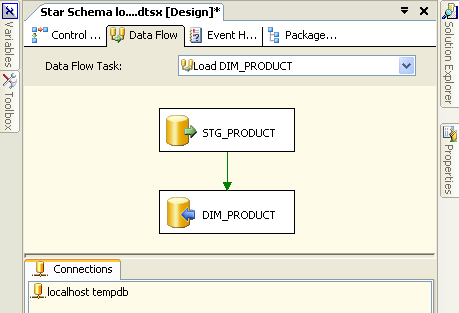 Let’s take a quick look at what we have here:

Note that data flows between abstracted sources and destinations which do not contain connectivity information. Instead they contain a reference to a connection manager (“localhost tempdb”) that defines physically where the data sources and destinations are. In this case the source and destination are on the same server so only one connection manager is required. Compare this to the DTS package illustrated previously where, in the interests of clarity, I had to define multiple connection objects that all reference the same server.

The data-flows for populating DIM_CUSTOMER and DIM_TIME are very similar to this so I am not going to show them here.

We also need a data-flow to populate our fact table FACT_SALES. 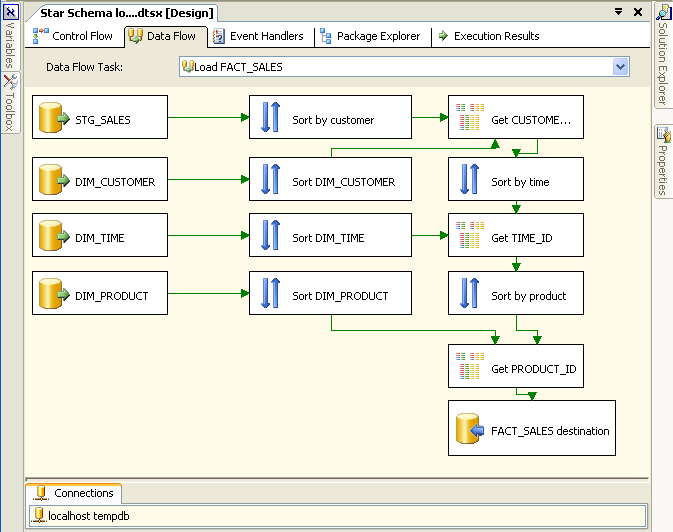 This data-flow looks a lot more complicated than it actually is. All it does is to join the fact data (in STG_SALES) to the dimension tables in order to get the surrogate keys for insertion into the fact table.

Some things to note about the control-flow:

The aim of this article is to demonstrate how SSIS has separated data-flow from control-flow which is the most obvious change that DTS developers will encounter when they first start to build SSIS packages. It is important to understand this new ETL paradigm in order to start down the path of

being an SSIS developer.

You can download the SSIS package I have built in conjunction with this article. It should help to demo the concepts that I am talking about here. Note that this was built in a pre-RTM version of SQL Server 2005 called IDW11 which was released in December 2004.

We all know testing is important, but face it, testing is not the highlight of anyone's daily work. And more important than testing your code the first time is regression testing after you have fixed a few bugs. Kristian Wedberg brings us a new article that uses SSIS to build a harness that allows repeatable testing of code and applying benchmarks to be sure that things are working as expected.