The Date Dimension in Analysis Services

In SSAS, we can have the same dimension added into the cube several times as different names. This is known as a 'role play' dimension. A dimension that has been attached to a cube is called a 'cube dimension'.

The purpose of having a role play dimension is to have identical dimensions in the cube. These cube dimensions have the same attributes, the same members, the same hierarchies, the same sorting order, the same properties, the same default member, and the same display folders. Everything is the same, except the name and the relationship to the measure groups in the cube, i.e. referenced or direct, materialized or not.

Data Source View (DSV) is a layer on an Analysis Services project where we can specify the tables and views that we use to build a cube, and the relationship between the tables/views. Instead of specifying a table or a view, we can also specify a SQL select statement that queries a table or a view, or several tables/views. This select statement is called a Named Query.

On the DSV, we can create several named queries from the same date dimension table on the relational database. The reason for doing this is to enable us select a different range of data, i.e. different sets of rows. For example, in a credit card cube, for the start date dimension we may want to select different date range compared to the expiry date dimension. Perhaps the start date starts from 1996 but the end date starts from 1998. For insurance industry, for each policy or risk we have written date, accounted date, inception date, effective date and expiry date. These dates may have different ranges.

The second reason for having separate named queries on the DSV for date dimensions is to enable us to have different sets of columns. For example, for written date, transaction date and effective date the business may need year, quarter, month and date attributes. Where as for snapshot month they only need month and year.

Before we continue, let's recap:

Another benefit of using the unknown member rather than the unknown row is to capture 'orphaned rows'. An orphaned row is a row on the fact table with a dimension key that does not exist on the dimension table. In best practice this should not happen. The ETL is supposed to prevent this situation. The ETL should allocate key 0 (or whatever the surrogate key of the unknown row is) to those fact table rows, so that they are mapped to the dimension unknown row. But in reality this does happen in practice. Not intentionally of course but it does happen. A typical situation is where the dimensional key column on the fact table contains NULL rather than 0 because that key column is not applicable for that fact row.

In data warehousing and business intelligence, mapping orphaned fact rows to the unknown member is important because if not we will miss those fact rows, causing the total of measures to be incorrect. In SSAS, if we don't change the UnknownMember and ErrorConfiguration properties, by default orphaned rows on the fact table will be mapped to the dimension unknown member. This way we will always get the correct totals of the measures. Some people set the UnknownMember property of the dimension to 'Hidden', relying completely to the ETL to guarantee that there are no orphaned rows in the fact table. If you decide to do this, it is wise to put foreign keys on the fact tables to guarantee referential integrity.

Another benefit of using unknown member rather than unknown row is that we can specify the name of the unknown member. It doesn't have to be 'Unknown'. We can set it to 'Not Applicable', for example, to suit the users' needs.

Despite all the advantages I mentioned above, personally I would prefer not to fiddle around with the unknown member in SSAS. Rather, I prefer to set the data in the fact and dimension tables correctly and leave the SSAS UnknownMember as per their defaults. For example, I've come across a situation where the value of an attribute on the unknown row is = 'unk'. But there is another row in the dimension table with the attribute value = 'unknown'. When browsing the cube the users will find that the attribute has both 'unk' and 'unknown' members. We could tackle this on the DSV by adding a 'CASE WHEN' clause on the named query SQL, or we could exclude the unknown row and use the unknown member instead. But I prefer to fix the data, setting the physical values of that attribute correctly in the dimension table. The physical dimension table may not only be used by SSAS; it may also be used for reporting by SSRS or other reporting/BI tools such as Business Objects or Cognos.

Another disadvantage of using unknown member rather than unknown row is that when we make the unknown member visible, when there is no unmatched record, we will still see that member (unless we suppress it on the OLAP client).

It is a best practice to build a hierarchy and hide the composing attributes. This is more so in 2008 where AS checks if we have hidden the members used in the hierarchy and give us a warning if we haven't done so, e.g. “Avoid visible attribute hierarchies for attributes used as levels in user-defined hierarchies”.

For example, say we have these attributes: date, quarter, month and year.

We then create a Year-Quarter-Month-Date hierarchy and we hide the Date, Month and Year attributes. When we browse the hierarchy using ProClarity it looks like this: 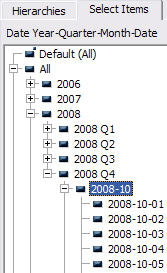 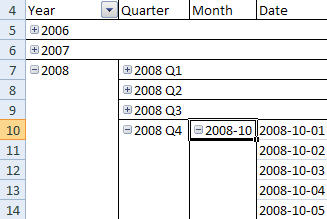 My colleague John Tunnicliffe advised me about ISO 8601 date format (yyyy-mm-dd), which I think is a good idea because of its clarity. It takes away the confusion caused by country-by-country custom such as dd/mm or mm/dd. He also mentioned about dd-mmm-yyyy format, e.g. 06 May 2008, which is useful to remove the confusion about month, such as 05/06/08: is it 5th June or 6th May? One caution about using mmm (short form of month) is the language, i.e. is it Mei, Mai or Mayo?

Although BIDS 2008 advised to hide the attributes used in the hierarchy, in my experience some users would still prefer to see those attributes. This enables them to use (for example) the month attribute directly either as a slicer or filter, without navigating through the Year-Month-Date hierarchy.

We should name our hierarchies properly. The name needs to reflect the levels, i.e. 'Year-Month-Date', not just 'Date Hierarchy'. Also it is better to avoid abbreviation. Calling it YMD might cause confusion among some users, wondering what YMD stands for.

It must have been quite a long read so far, so I'll end it here. In part two I will discuss:

Author of Building a Data Warehouse With Examples on SQL Server

I have seen the tip Dynamically Control Data Filtering in SQL Server Reporting Services Reports which showed how to leverage a SQL Server database table to filter sales data based on the user running the report. I have a similar requirement to implement dynamic filtering except my data is in a SQL Server Analysis Services (SSAS) cube and the users query the data with a variety of different tools. How can I implement dynamic security in my case?

Continuing with his discussion of how to implement a date dimension in SQL Server Analysis services, expert warehousing expert Vincent Rainardi discusses how to use this dimension as a reference dimension as well as other advanced topics.

Join Business Intelligence Architect Bill Pearson as he kicks off an exploration of Attribute Member Keys, a continuation of a body of articles surrounding significant components of the Analysis Services dimensional model. In this article we introduce Attribute Member Keys, focusing upon the simple keys and their properties.

See an example of using the Many-to-Many dimension in SQL Server 2005 Analysis Services to analyze sales data, and get ideas for other uses such as treating medical conditions, software testing, and more.