After my article about Automatic Database Seeding  had been published, I got a question about how that can work with a TDE database. Coincidentally at the same time at work, I had been assigned a project that related to TDE. So, I have decided to share my knowledge about TDE on Availability Groups and do some practice work at the same time.

Understanding of some basic operations with certificates are crucial for being able to manage Transparent Data Encryption on an Availability Group. I suppose that the reader is familiar with Transparent Data Encryption on a standalone server, but I want to emphasize importance of some operations. Also, I will use scripts from this section multiple times in this article, and I will refer a reader to this section in order to avoid repeating myself.

The most important from my point of view is have a backup of a certificate handy, to make a backup you can use the following script (script 1):

This scrip takes a backup of the certificate ‘MyNewTDECert’ including the private key in two files on the shared location, ‘\\shared_folder\my_secrets\’, with the private key encrypted with a password. You need to change a certificate name, the path, and the password to the values which are relevant to your environment.

Please make sure that you keep these files in secure location and the password in an encrypted form, so you will be able to restore that certificate when that is required, and it won’t be easy to steal by a 3rd party. More information about this command can be found on the official Microsoft BOL page.

The second important task is certificate restore, which can be performed using the following script (script 2):

Again, you need to replace the paths, the certificate name, and the password with values that are relevant to your infrastructure. When you restore an expired certificate, you will see a warning message, but TDE will work fine. It is recommended that you renew all expired certificates, as will be shown later. Additional information about this command can be found on the official BOL page.

Note: please make sure that you have all the TDE certificates backed up before making any changes.

The code to find out with which certificate my database has been encrypted with is shown in the following script. This needs to be executed against the database with TDE enabled (script 3):

The code to create a new certificate the with the custom expiration date is shown in the script below (script 5):

Note: This is the same command that is used to restore a certificate.

To replace the TDE certificate, you need to create a new one. I would recommend using the script that creates a new certificate with a custom expiration data from the first section (script 5). The following script can be used to replace the encryption certificate for your database, in this case the database is ‘MySecretDatabase’ and the certificate is ‘MyNewTDECert’:

You may see a warning that the certificate hasn’t been backed up. Please make sure you take backups of all certificates you use for TDE. The backup script has been provided in the first chapter (script 1).

When the new TDE certificate has been assigned please check that the TDE database use the new certificate. That can be achieved using the scrips from the first chapter (scripts 3 and 4). After that has been done you can drop the old certificate using the following script:

That is all what is required in order to renew a TDE certificate for a database which is not in an Availability Group.

Note: make sure that you keep a backup of an old certificate in case you need to restore a database to the point in time before we switched the encryption certificate.

Replace an Expired TDE certificate on a Database in an AG

Before making any changes, please check that the AG is healthy, and the database is synchronized across the replicas. For that purpose I usually use the Availability Groups Dashboard from Microsoft SQL Server Management Studio: 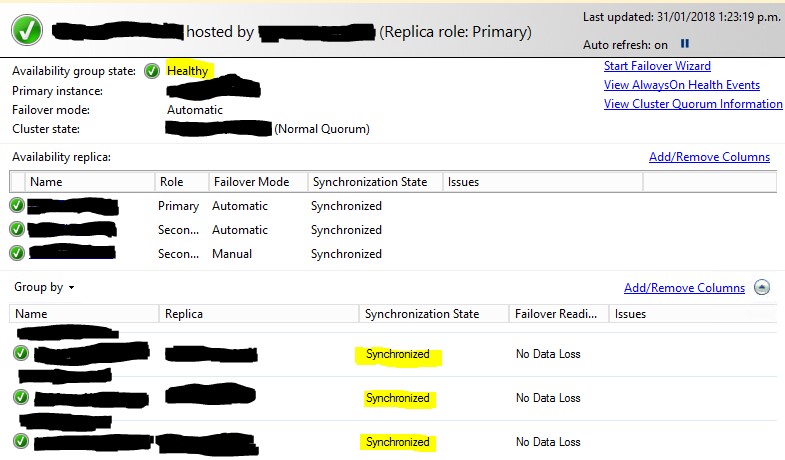 For an Availability Group, you should create the new certificate on the primary node (script 5), then create a backup with the private key (script 1). After that, you must distribute the certificate with the private key among all the AG nodes. You may use the import script from the first section (script 2). You can also use the script from the first section (script 4) in order to make sure that all replicas have the certificate with the same thumbprint. When that has been done can you alter the database encryption key on the primary replica and drop the old certificate from all the replicas.

The database encryption key (DEK) can be altered with a new certificate using the script below:

We can remove an old expired certificate the same way it was done for a TDE database outside of an AG from all participating replicas:

Please check that you Availability Group is healthy and the TDE in synchronized state after you have renewed the TDE certificate. Keep the new certificate in a secure and reliable storage so you would be able to restore your TDE database in case of disaster or migration.

Note: the process of renewing certificate is very similar to the initial activation of the TDE for a database. Also, before doing any manipulations on the AG, make sure that the AG is healthy, and databases are synchronised.

Note: make sure that you keep a backup of an old certificate in case you will need a restore database to the point in time before we switched the encryption certificate.

If you have read my article about this feature you can find some useful information about TDE and Automatic Database Seeding in the article discussion topic. If you haven’t read it, please do so.

If you want to use TDE databases with automatic database seeding, you must distribute encryption certificates among all the participating replicas before you add a database into an AG. Here is the simple step by step instruction:

Additional information about TDE can be found on the official Microsoft web site.

Sometimes it is difficult to combine some SQL Server features because of many limitations. But as you can see it is possible to combine TDE, Availability Groups, and Automatic Database Seeding for a database running on a SQL Server 2016 instance. The only one limitation I found during testing of such configurations is that you won’t be able to use graphic interface to add database in an AG. I hope that article will help you with your work.

Decryption Timer to let you know when the removal of encryption for a TDE encrypted database has completed to perform a backup of the data after masking.

How to Remove Transparent Data Encryption From a Database

There may be a time when you want to turn off transparent data encryption on one of your TDE enabled databases. In this tip, Greg Larsen shows you how simple it is to remove Transparent Data Encryption.

In this tip, Manvendra Singh will cover how to add another database to an existing Always On Availability Group.

This article will provide the actual implementation of the control mechanism.

Aaron Bertrand reveals details about the changes to Availability Groups that will ship in the next major version: SQL Server 2016.