SSIS Is Not Just for SQL Server

SSIS: Not Just for SQL Server

It's been said that when all you have is a hammer, everything looks like a nail.

SQL Server Integration Services is just such a tool, and can turn lots of difficult

- into nothing more than simple 16 penny nails.  Since I got started with

SQL Server Integration Services (SSIS) over a year ago, I've found a number of uses

for this product that would have required hours of coding or batch scripting.

files from a remote web server each day, run an executable to process each file,

then archive the log file locally.  This was being done manually before the

SSIS hammer got involved.  Even though this information is external to SQL

Server, the nature of the task seemed to be a perfect fit for SSIS.  Automating this process was a quick and easy task

package variables.  The file name we are to download is for the previous day

and is named according to the date.  The following snippet shows the logic

to set those variables:

Next, I'll use another simple task, the FTP Task, to download the source file from

the FTP server.  The RemoteFile name set in the script task above is used to

download yesterday's file.  You can see that I am using the variables referenced

in the above script task to dynamically set the file names in the FTP Task: 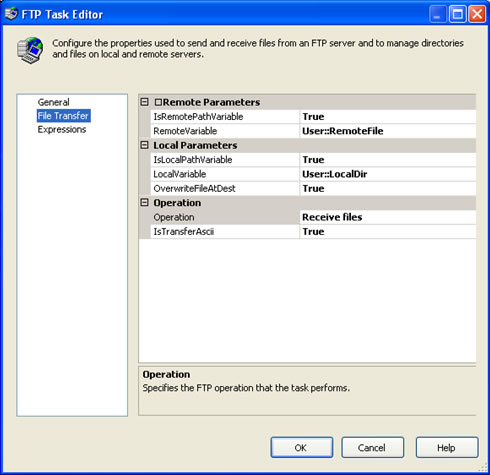 The next step is to create an instance of the very useful Execute Process task.  This

element allows you to call an external exectuable from within SSIS, and also allows

you to specify arguments for those calls.  In this case, I need to call the

perl.exe executable and pass the name of the Perl script to run along with some

other values (including the local file name set earlier).  The settings here

are relatively straightforward; the only thing that requires a little tweaking is

to set the argument properly, since this will need to be dynamic.  See below 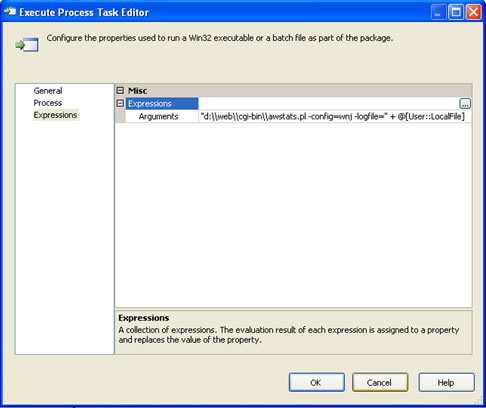 You can also see that I am capturing the output of the call to perl.exe below, to

allow me to review the statistics generated by the script.  As shown below,

send it to another package variable: 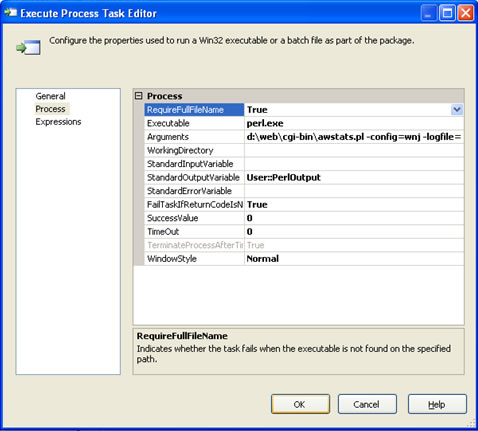 Lastly, I use a Send Mail task to e-mail the output message in the PerlOutput variable

to the operator to verify record counts.

SQL Server Integration Services is a very powerful data processing tool, and its

uses with SQL Server are almost limitless.  Even more, this article has shown