It has been well over five months since SQL Server 2005 was released. Market research has shown that it is still gathering momentum among the software community. If you meet a person who is new to SQL Server 2005, the obvious question that they will ask is "What is new in SQL Server 2005?". Well, obviously there are lots of differences.

To start with it does have a nice UI. You can rename the databases, which you could not do in earlier versions. With these simple (but important) enhancements, there are a few major changes as well. DDL triggers and peer-to-peer replication can be considered as major changes.

So, it is obvious that the above question needs a lengthy answer, which cannot be completed in one article. So I thought to identify a major component of SQL Server 2005 that has had drastic changes. SQL Agent is one of them, so this series of articles will discus the changes in SQL Server 2005 Agent.

This article will describe about security and performance improvements are done to the SQL Server Agent.

In SQL Server 2000, the SQL Server Agent service account had to be a member of the local administrators group when executing Jobs owned by users who were not members of the sysadmin fixed server roles. In order to give more control to the administrators, new three roles have been added in SQL Server 2005. These roles are SQLAgentUserRole, SQLAgentReaderRole, and SQLAgentOperatorRole.

After the initial installation, only sysadmin users can edit, view and execute SQL Server jobs. These roles exists only in msdb database. The following screen will show you how to create a user with above mentioned roles. 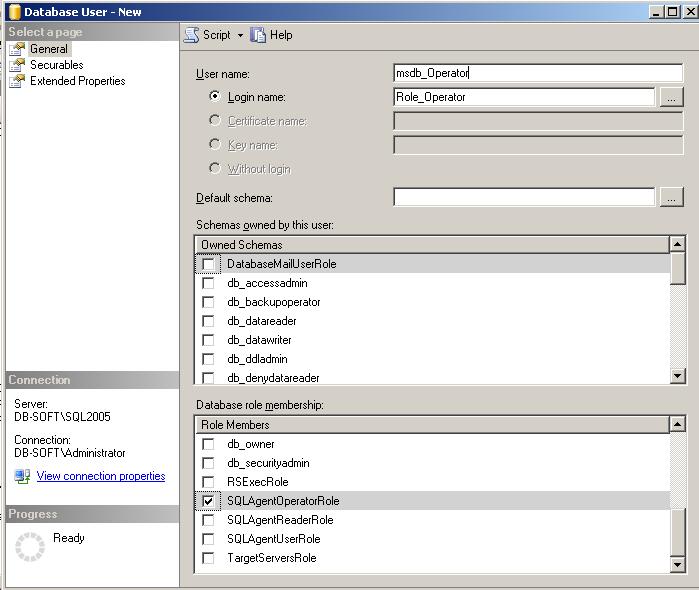 This is the least privileged role among new three new fixed server roles. This role has permissions only on operators, local jobs, and job schedules. These types of users can only view the operator but they can't create, modify or delete operators. They cannot change job ownership to gain access to jobs that they do not already own. SQLAgentUserRole members can view a list of available proxies only in the Job Step Properties dialog box of SQL Server Management Studio. These users cannot delete job history.

SQLAgentOperatorRole is the most privileged of the SQL Server Agent fixed database roles. It includes all the permissions of SQLAgentUserRole and SQLAgentReaderRole. Members of this role can also view properties for operators and proxies, and enumerate available proxies and alerts on the server. SQLAgentOperatorRole members have additional permissions on local jobs and schedules. They can execute, stop, or start all local jobs, and they can delete the job history for any local job on the server.

In SQL Server 2000, registry entry determines how many threads of a subsystem could be activated at once. the max_worker_thread settings is stored in registry. For the default instance, this setting is in HKEY_LOCAL_MACHINE\SOFTWARE\Microsoft\MSSQLServer\SQLServerAgent\Subsystems registry key. Last part of each key is a number which specifies the max_worker_thread setting for the subsystem. For QueueReader  subsystem , in my SQL Server instance it has the value C:\Program Files\Microsoft SQL Server\MSSQL\BINN\SQLREPSS.DLL,C:\Program Files\Microsoft SQL Server\80\COM\QRDRSVC.EXE,ReplStart,ReplEvent,ReplStop,100. This means that max_worker_thread  value is 100.

In addition to the above improvement, new four performance counter objects have introduced in SQL Server 2005 Agent. These objects can be used to improve the performance of your SQL Server.

events written there to alerts that you have defined. When SQL Server Agent

finds a match, it fires an alert. So from the above counters, a system admin can examine the alert pattern and their quantity.  If the Alert count is high it needs to prompt immediate actions. Alerts activated/minute is more important as it gives the density of alerts.

Only users who are member of the sysadmin fixed server role can use this counter object.

Each counter contains the following

Following are the instances for each counter listed above.

The availability of these roles have given administrators more flexibility when defining users for Jobs. Consider your requirements and associate the necessary fixed role that fit them.

In the next article we will take about few more additions that are introduced to SQL Server Agent 2005. Until then , do not hesitate to send your comments to dineshasanka@gmail.com

This is the forth article in the transaction and lock series. Up to now, the locks and hints discussed have applied to both SQL 2000 and SQL 20005. However, this article will introduce Snapshots, new in Microsoft SQL 2005.

In this article, we will be giving you an overview of what the new interface looks like in SQL Server 2005.

Using the SQLCMD in SQL Server 2005

SQL Server 2005 has changed quite a bit about the way DBAs will work with SQL Server. One of the new tools is the SQLCMD utility that will replace isql and osql as the command line utility. Author Andre Vigneau brings us a first look at this new tool and how you can do a few neat tricks with it.

In this article, we continue our discussion on high availability and scalability enhancements in SQL Server 2005 Beta 2 release. Features such as clustering, database mirroring, online indexing, fast recovery, database snapshots, and snapshot isolation transaction level have already been covered earlier in this series - now we will concentrate on the remaining features, such as a new method of table and index partitioning, backup and restore improvements, and new hardware support options.