Using Recommendations for MAXDOP and Max Memory During Installation

Finally, two important SQL Server recommended settings have been introduced during the installation process. These are the settings that every DBA (should) change after every single installation. The settings are MaxDOP and Max Memory. This article looks at each of these settings and how they are presented during installation.

When an instance of SQL Server runs on a computer that has more than one CPU logical core, it detects the best degree of parallelism for a query. That is to say, the number of processors employed to run a single task for each part of a parallel plan execution. MAXDOP specifies the maximum number of cores that the engine can use for a single task. Note that a query might spawn multiple tasks. You can read this Microsoft article if you want to know more about MaxDOP: Configure the max degree of parallelism Server Configuration Option

When I install SQL Server, the setup program will give me a recommendation and allow me to change this on a tab in the Database Engine Configuration screen. As you can see, setup is recommending me a MaxDOP of 4, on my machine that has 4 logical CPU cores. 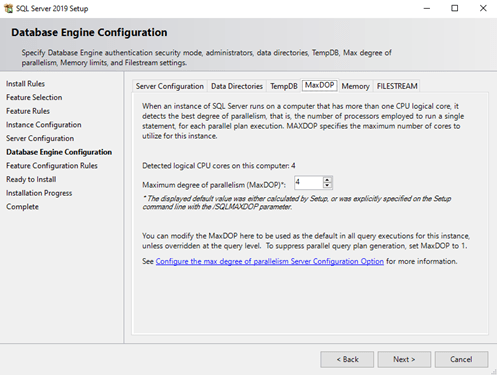 If you run unattended setup, the parameter for the command line is /SQLMAXDOP. This is noted in the image above.

In the past, I used to check the recommended value with this query, which I found on the Microsoft site. I am assuming the logic behind the recommendation in setup is the same.

You likely will want to use the recommendation from setup unless you have evidence that it is wrong based on a previous workload.

There are a few places you might want to look for more information on this setting:

Another very important instance setting is the maximum memory that your server will use. You can read about minimum and maximum memory at Microsoft. Not setting this, or setting it too low, may lead to performance issues and may adversely affect your instance.

By default, max memory is 2147483647 (this value is in MB). If there are two instances on a the same host with the default memory setting, then one SQL Server instance will battle for memory with the other instance and this can cause performance issues.  Also, setting this value too low memory can lead to performance issue and memory pressure.

For a single instance, follow 70-30 rule [70% SQL Server and 30% Operating System]. For multiple hosts, you will need to still leave memory for the OS and then divide the remaining memory among your instances.

In setup, again on the Database Engine Configuration page, there is a Memory tab. You can see there is a checkbox for recommended and default memory. The recommended max memory (MB) is 5940 on my 8Gb machine, which is ~72% of the total memory. 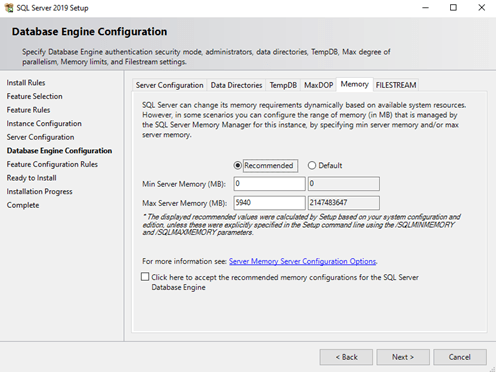 As mentioned in the screenshot above, /SQLMINMEMORY and /SQLMAXMEMORY are the parameters for use in the command line.

There are a few references for setting max memory on your instances:

Always Check the Settings During Setup

Learn how to correct an error that is overloading SCOM by fixing an SPN.

A strange error with SSIS is solved with a networking change.

Default backup schemes for databases would be a nice enhancement.