As a result, Always Encrypted provides separation between those who own the data and those who manage it. Even DBAs, system admins, and cloud admins cannot access the data. Always Encrypted is a client side encryption and makes encryption transparent to the application. Data is transparently encrypted inside a client driver, and the client manages the encryption key. The key can be stored in either the Windows certificate store or Azure Key Vault.

In order to implement Always Encrypted on a column, we need to generate a Column Encryption Key (CEK) and a Column Master Key (CMK). The CEK is used to protect/encrypt the column data, while the CMK is used to store and protect/encrypt the CEK. The CEK is stored in the SQL Server database engine. For the Column Master Key, the database engine stores only metadata that points to the key location. The actual master key is stored in a trusted external key store.

This involves a special driver that encrypts the data in sensitive columns before passing it to the Database Engine and automatically rewrites queries so that the semantics are preserved. When the client application retrieves the encrypted data from the database, the same driver transparently decrypted returning plain text to the client application. Consequently SQL Server never sees the sensitive information in plain text. The server does not have access to the key, either. The keys are managed entirely on the client side.

Here are the steps to encrypting data in a table. First, connect to your database using SSMS. Next, right click on the targeted table, which contains sensitive data, and select Encrypt Columns. In this scenario, we are encrypting columns for table 'tblEmployee'. 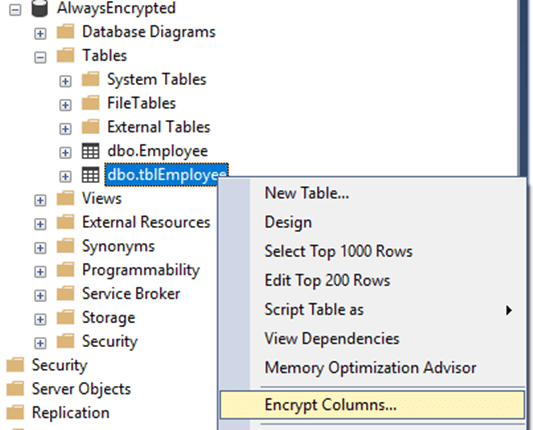 This action starts Always Encrypted wizard which will guide you through the process of encrypting table column. 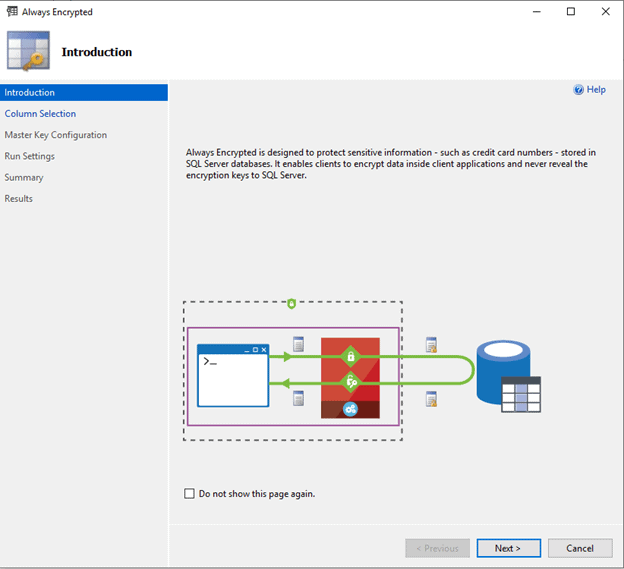 Once you click Next button, you will proceed to the column selection step. In this scenario, we are selecting the NationalID, Birthdate, and HireDate columns to be encrypted. 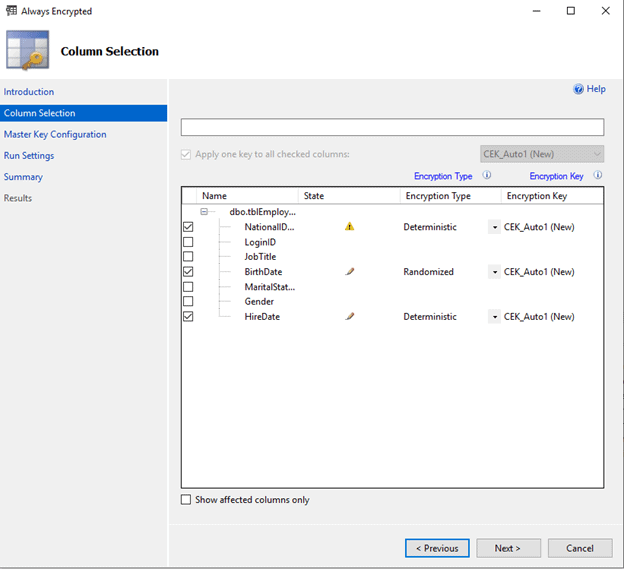 Once you click Next, the wizard moves on to the Master Key configuration step 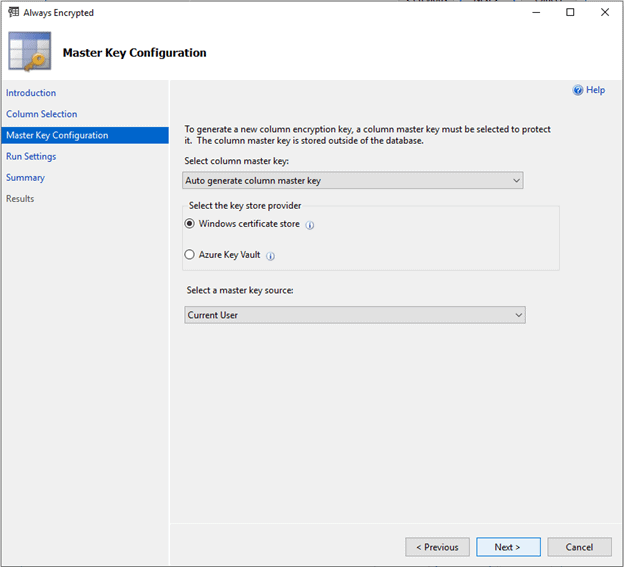 Once we click Next, we are presented with the Run Settings dialogue. We either can execute our configuration steps immediately or generate a PowerShell script to run later. 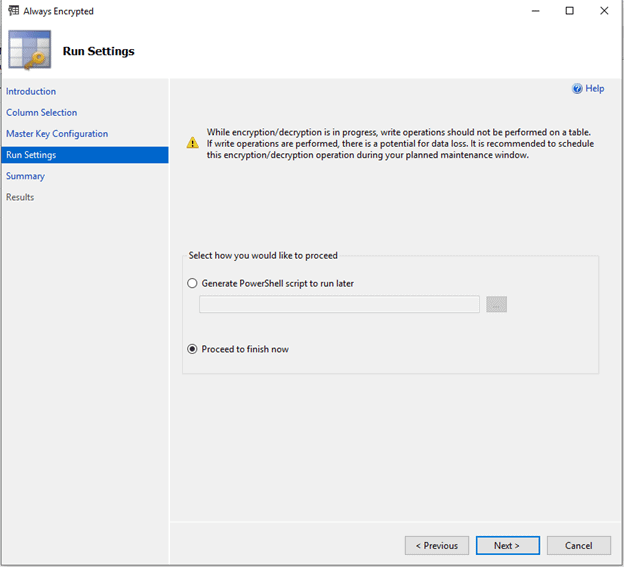 On the Summary page we just reviewing the selections. Click Finish 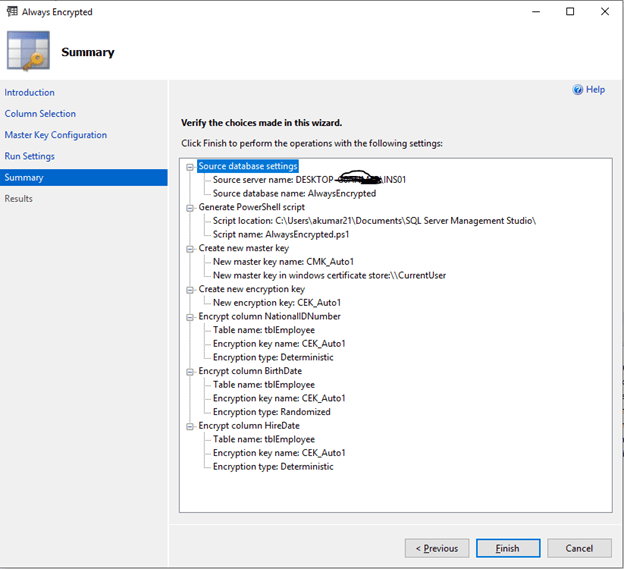 As we selected the Windows certificate store for our certificate, we can open the Certificates snap-in (certmgr.msc) for the local computer and find our Always Encrypted Auto Certificate in Personal certificates, as shown here. 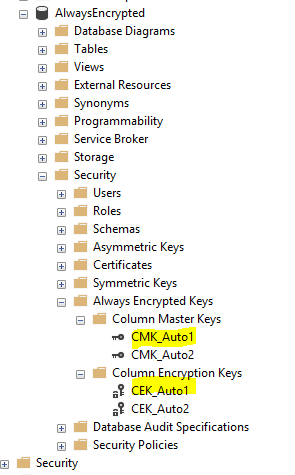 Now, execute a SELECT statement to list the data from the tblEmployee table.

All the values are encrypted for the columns we selected. We have all the prerequisites in place and the certificate, so we are supposed to see the data just fine. In order to do this, you need to specify special a connection string parameter. For SSMS, you just need to open the connection dialog and click on the Options button. 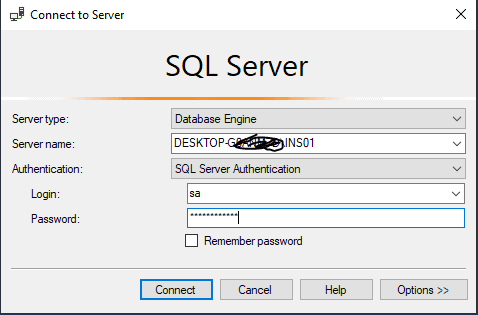 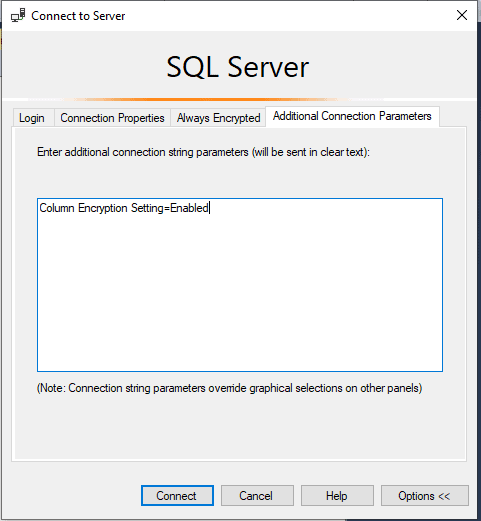 After you type the setting, click Connect, and the re-run the select statement. Your result should now look similar to the figure below.

To configure the encryption in the client application, you need to add additional connection setting in the application .config file. Here is an example that is used in a connection string setting:

Learn how you can secure your TDE environment by separating your key from the server using Extensible Key Management.