One of the areas improved for SQL 2008 is database mirroring. Two of the improvements listed in Books Online that caught my eye are compression of data sent across the network (at least 12.5 % compression ratio according to books online), and "Write-ahead on the incoming log stream" on the mirror server. I decided to do some simple testing to see if these changes made a noticeable difference.

For testing purposes, I used basic workstation-class development machines. The machine that served as the principal was running XP-Pro, and the machine serving as the mirror was running Server 2003 standard. For both machines I installed SQL 2005 Developer Edition (SP2) and SQL 2008 Developer Edition (RTM). I installed both instances as named instances, and while testing only started the instance that I was using for the test.

For the test database, I used a copy of one of our production databases (about 4GB in size) and configured the mirroring for high-safety with no automatic failover. To simulate a load, I wrote a simple script that inserted records at a steady pace, and a script that randomly updates records at a steady pace. Mirroring sessions were set up as high safety (synchronous) without automatic failover.

I found it interesting that SQL allowed a 2005 principal to mirror to a 2008 server. While I was playing around I observed that the mirroring seemed to work fine with this setup, but it did not allow you to take snapshots (from what I can tell, this is because the 2005 database isn't actually upgraded to 2008's file structure until the recovery process in a database restore runs). If you manually fail over to the mirror server, it prints out messages saying it is upgrading the database to 2008. I didn't test it, but I assume this means you can't put that database back on a 2005 SQL server. I don't know how much support you will get mirroring like this for long periods of time, but Books Online briefly mentions a rolling upgrade strategy to upgrade mirrored servers from 2005 to 2008 that involves upgrading the mirror server first, so I think all of the behavior I observed is by design. Just something to keep in mind.

The amount of data writes to disk increased slightly (about 10%) when using SQL server 2008. I assume this is a result of the way 2008 is simultaneously writing log records to disk and processing log records. Unless the disks on your mirror server are stressed to begin with, this is probably insignificant. 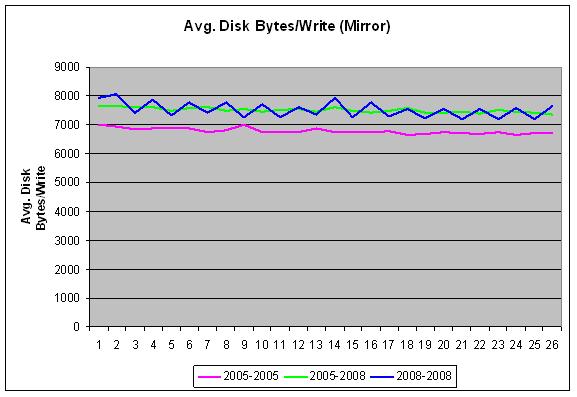 CPU usage on the principal server when mirroring from a 2008 principal to a 2008 mirror was significantly higher for a few minutes, then settled down to be roughly the same as 2005 mirroring for the remainder of the test. I'm not sure how to account for this. I was expecting a slight increase in CPU usage due to overhead in compressing the log stream, but that is not what is observed. I would expect the CPU usage to vary a little bit based on the size of the data changes made, data types involved, etc. 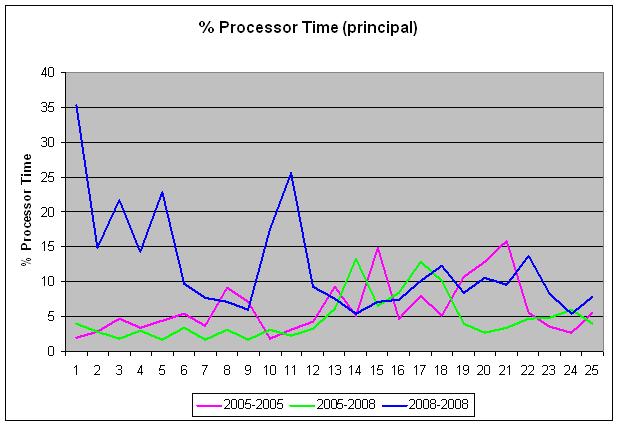 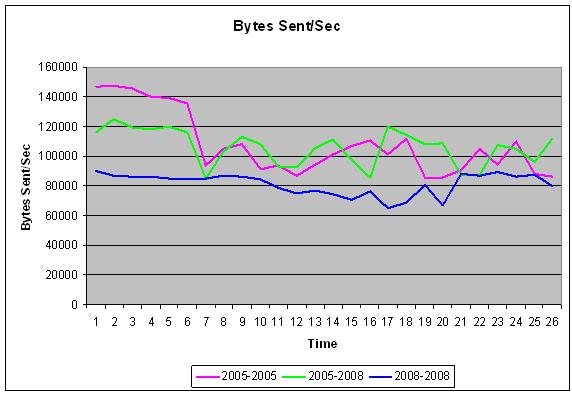 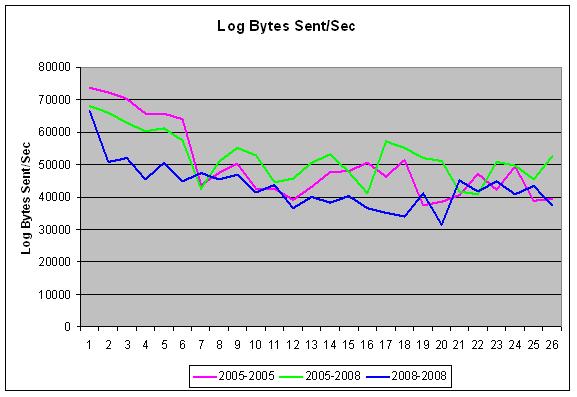 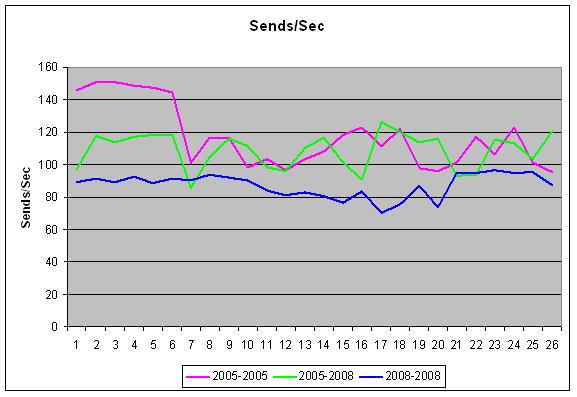 For the test setup I used, I did indeed see a potentially significant decrease in the amount of network data sent when using SQL 2008 mirroring. With the exception of the disk performance, mirroring from SQL 2005 to SQL 2008 shows little if any performance difference than 2005 to 2005 mirroring. If your network capability in your mirroring environment is currently a bottleneck, then SQL 2008 mirroring may help you out a little bit. This feature alone probably doesn't justify an upgrade, but it's a nice bonus if you are upgrading for other reasons also. I also really like the fact that there are no changes to the mirroring setup between the two versions so all of your mirroring scripts will still work. (I did not play with the GUI that SSMS offers for setting up mirroring, so can't comment on whether or not they are different between 2005 and 2008).

These results are what I happened to achieve today while running tests. Actual results may vary based on database characteristics, network characteristics, server characteristics and the alignment of Saturn's moons. Do your own testing rather than relying on this article to make important upgrade decisions.

This tip outlines a test environment and then walks through the process of setting up Database Mirroring. This includes the configurations, backups, restores and verification process.

If you don't have a witness server and your principal server goes, how do you make your mirror server the principal and bring all your databases online?

One of the configuration options for Database Mirroring is the High Availability mode. With this option three servers are put in place the principal, mirror and witness servers. This is the only option that allows for automatic failover. One of the things that I have noticed is that when there are periodic network issues a failover occurs even though there are no issues with the Principal server. Are there any options to delay the failover?

Database Mirroring was released with SQL Server 2005 and is becoming a popular choice for a failover solution. One of the big issues with Database Mirroring is that the failover is tied to one database, so if there is a database failure the mirrored server takes over for this one database, but all other databases remain functional on the primary server.