A ‘DTU’ is a ‘Database Throughput Unit’, it’s a calculation of the CPU & IO resource requirements for a given workload on a given server. The exact criteria used by the DTU Calculator to formulate a suggested Performance Level isn’t explained, but it’s calculated using the Performance Counters below:

I have two personal use SQL Instances at home that are candidates for migration to Azure: one hosted on a physical server and one on a virtual server. I used the ‘SQL Heart Beat’ framework described later in this article to benchmark these against different recommended SQL Azure database Performance Levels:

This benchmarking process is illustrated in Figure 1 below. 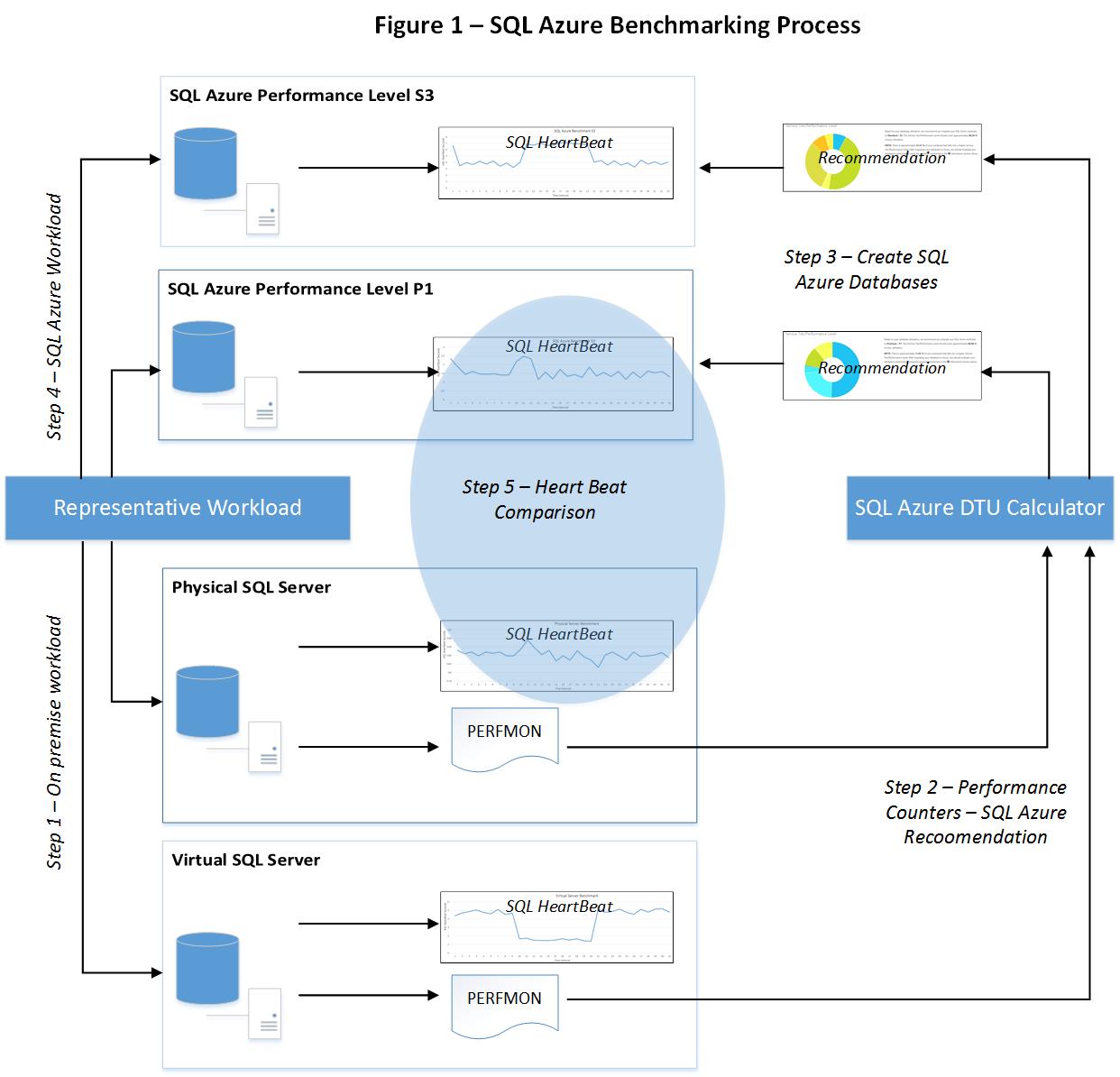 The next step was to use the DTU calculator to determine what size Azure SQL Database I would need for each of these instances.

Figure 2 below shows % Processor Time on the physical server. The activity is entirely the result of SQL Heart Beats running at 2 minute intervals, and a stress test after 20 minutes. There was no other concurrent activity on the server.

Figure 3 below shows Disk Writes/sec on the physical server, read activity was low. 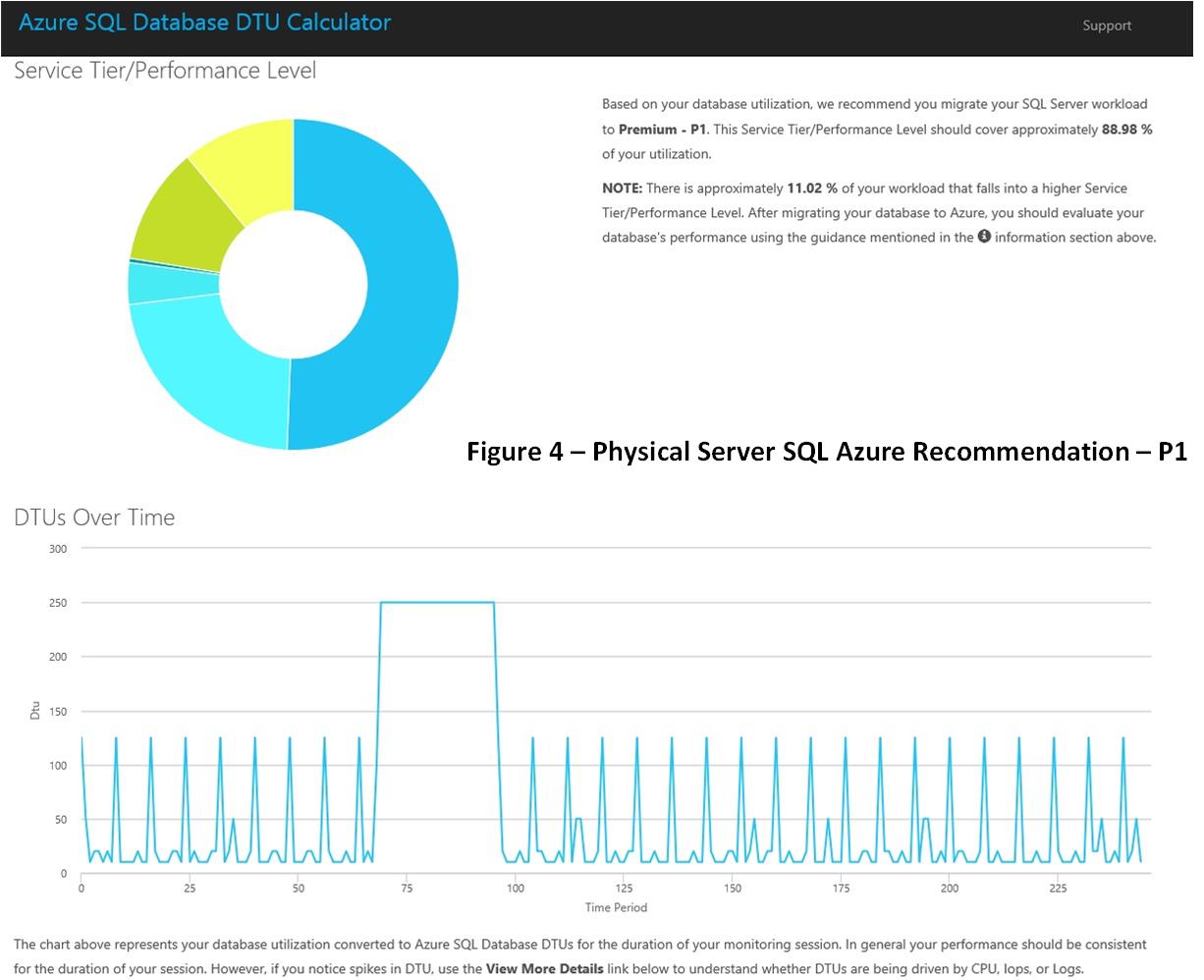 Figure 5 below shows % Processor Time on the virtual server. The activity is entirely the result of SQL Heart Beats running at 2 minute intervals, and a stress test after 20 minutes. There was no other concurrent activity on the server.

Figure 6 below shows Disk Writes/sec on the virtual server, read activity was low. The stress test workload took longer to complete than on the physical server. 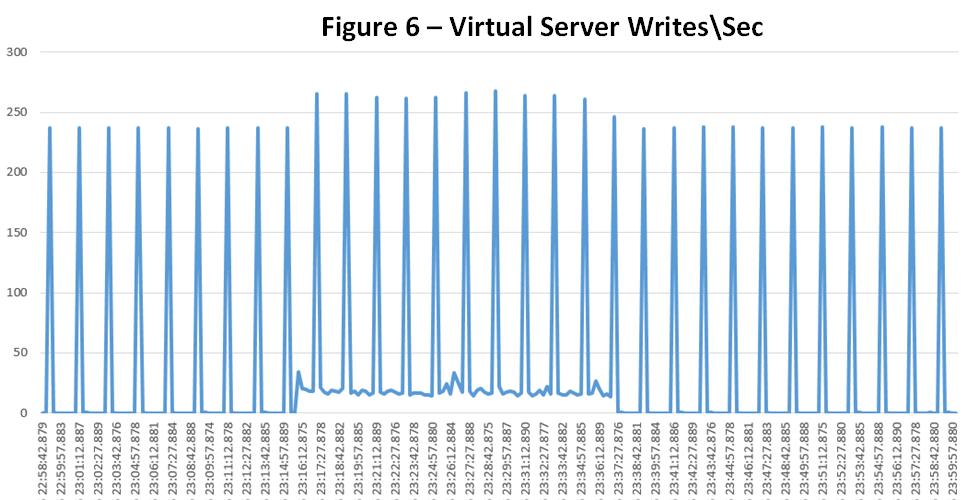 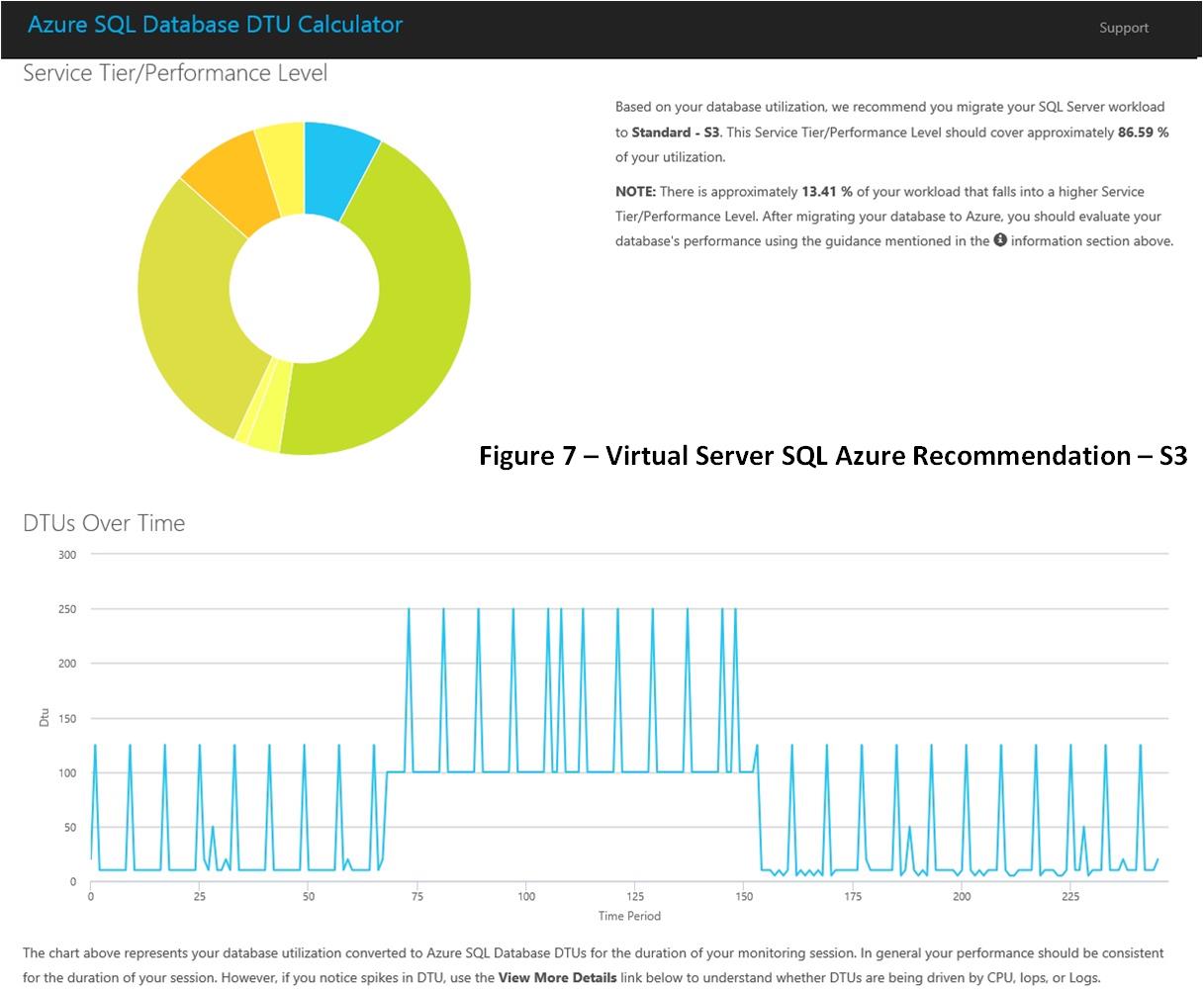 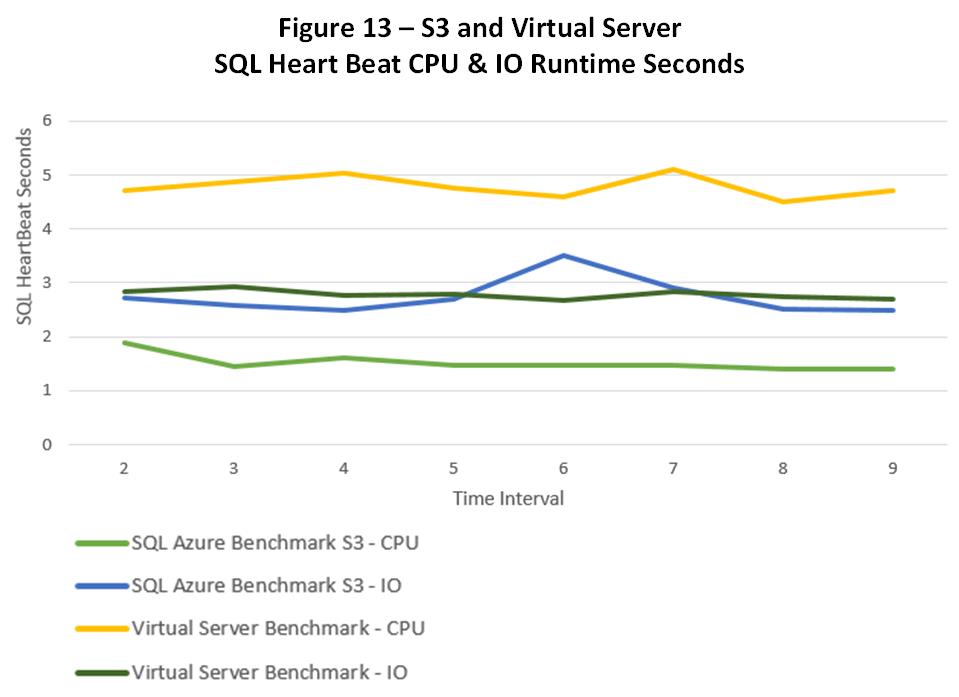 The DTU Calculator recommended SQL Azure Performance Level P1 for the physical server, but upgrading to Premium Level was not in the plan. 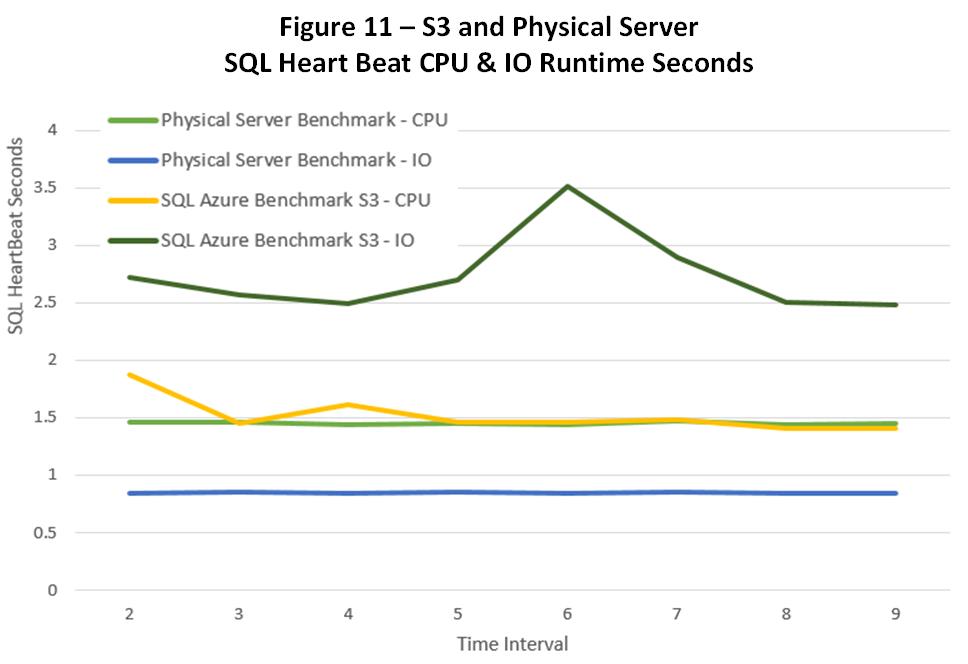 A ‘SQL Heart Beat’ is the total duration (milliseconds) of a call to a stored procedure that repeats precise mathematic calculations using the same fixed starting point / initial dataset. The runtime performance of a call is very consistent in stable environments but also sensitivity to other workloads in contended environments.

To use the framework, first create a database called ‘SQL_HeartBeat’ then run the setup script attached.

The T-SQL script below was run once every 2 minutes for an hour with different descriptions for different servers. It runs a set workload that typically takes between 3 and 10 seconds depending on the server and concurrent activity.

The T-SQL script below was run once with different descriptions for different servers. It runs a CPU intensive workload that can take between 7 and 40 minutes, depending on the server and concurrent activity.
The query below returns results (SQL Heart Beat run times) in a format that pivot well in Excel.
Figure 12 below shows the Pivot Table fields used to produce the graphs in this article. If Heart Beats were collected at irregular intervals then use Average of Duration rather than Sum of Duration for the pivot table 'VALUES' column. 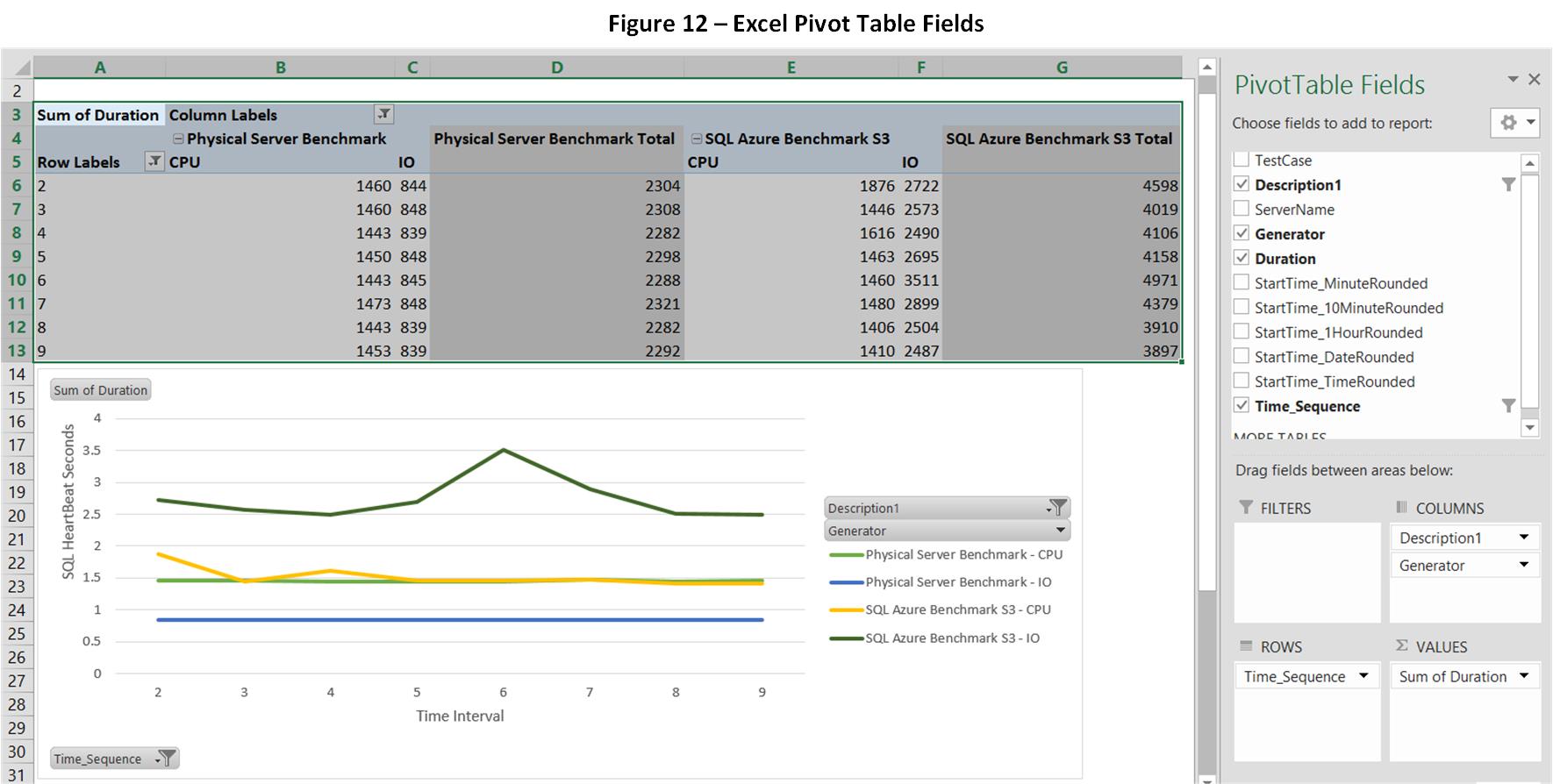 How to use Azure SQL Database features and settings

Vitor Montalvao explains how to work with the basic configuration settings for a SQL Azure database from the Microsoft Azure portal itself.

Active Geo-location is powerful magic for ensuring the high availability of a Azure SQL database, and for disaster-recovery. In choosing the best options, you need to accurately understand the value that the business places on the service you're running, long it will take for a secondary replica to be in synch with the primary replica, the importance of spreading the location of replicas widely, and the maximum tolerable unscheduled downtime. Just clicking all the options could prove to be expensive.

One of the challenges when considering migrating your on-premises SQL Server databases to Azure SQL Database is its lack of support for Active Directory-integrated authentication. With the advent of Azure SQL Database V12, the authentication capabilities have been expanded, allowing for more flexibility that leverages Azure Active Directory. In this article, Marcin Policht provides an overview of this functionality.

Daniel Calbimonte shows how to create an Azure SQL Database with the AdventureworksLT data, and how to import the information into a SQL Server Analysis Services Tabular Model Database.