Should I Type * or 1 With the EXISTS Logical Operator

Let me take a moment and do some research to find out which option is the best when you want to use the EXISTS logical operator. Here we are talking about a query like this:

Listing 1: Hypothetical example of using of the EXISTS logical operator

So, which option provides us better performance and readability?

Let's make our initial setup. This script will create two tables with primary keys and a foreign key between them. We also add some data.

Now Product table contains 1,000,000 rows and half of them are in ProductOrder table. So, each second Product was ordered. This means each our test query should return 500,000 rows. Once we have the tables set up, we can test our options and take a look at the execution plans of each of them.

Let's start with this query, using the "SELECT *":

Picture 1: Execution plan built for the script from Listing 2.

With the next query we are going to test the "SELECT TOP 1 1":

As you can see in Picture 2 below the execution plan is the same as in Picture 1.

Picture 2: Execution plan built for the script from Listing 3

Continue with the "SELECT 1":

As you can see in Picture 3 below, the execution plan is the same as in the Pictures 1 and 2.

Picture 3: Execution plan built for the script from Listing 4

Please, believe me these three pictures above and one picture below are four different pictures, I really did copy and paste each of them one by one.

As you can see in Picture 4, the execution plan is the same as in Pictures 1, 2 and 3. Thus, we can be sure that SQL Server query optimizer recognize these four queries as one, regardless what we wrote right after the EXISTS(SELECT...

Picture 4: Execution plan built for the script from Listing 5

In the queries #2 and #4, by using the TOP try to tell SQL Server to stop scan all following matching rows in the table ProductOrder if it has found at least one match in the table, Product. Even if there are many rows in the table ProductOrder matching a single row in the Product table only that single row should be in the result set. This is exactly the same thing that the "Right Semi Join" operator does. That's why you didn't see the TOP operator icon in the pictures above. But let's be sure that query optimizer did not make a mistake (this is ridiculous, but this is for research only). Below is the example of a query and its execution plan utilizing the TOP operator.

Okay, the TOP operator was not ignored by mistake because it is in Picture 5 surrounded by a red circle. However, the "Right Semi Join" did all the work instead of TOP. So, if there was no mistake by the optimizer, we can ignore the "TOP" word. So, in further research we can look at only queries #1 and #3.

Picture 5: Execution plan built for the script from Listing 6

I am going to slightly change our SQL code to avoid measuring the time spent by the visual components embedded into SSMS. Instead of outputting all the existing products, let's have only a full count of them: COUNT(p.ID). There will be only one cell in the result grid. This is as simple as possible to render the results.

Picture 6: Execution results generated by the script from Listing 7.

Picture 7: STATISTICS TIME ON output generated by the script from Listing 7.

Correction, the spent time is 171 ms.

Let's go to the case #3, but first let's make the data cold by invoking the DBCC commands again.

Picture 8: Execution results generated by the script from Listing 8.

Comparing Pictures #6 and #8, do you see a big difference? I don't. What about statistics time?

Picture 9: STATISTICS TIME ON output generated by the script from Listing 8.

For now we have seen that there is no difference in performance between #1 and #3. But, I do not what to give up. Actually, I heard and read many times that case #1 forces SQL Server to expand metadata that, in turn, can lead to a slower compilation. But, how can we check it? Hmm. Let's add 1022 fields to the ProductOrder table. I think the max value of fields must show us at least something interesting about that assumption.

So, the query below can proof that I added 1022 columns to the ProductOrder table.

Picture 10: Query and its result proofing 1024 columns in the ProductOrder table 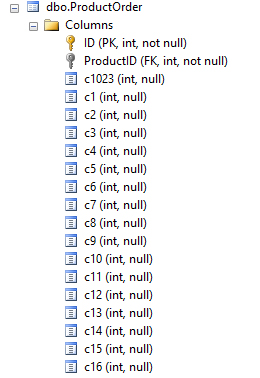 I would say the numbers in Pictures #12 and #13 are the same. But, please remember, both of cases are compiled with 1024 fields. Does it mean that the metadata does not affect compilation duration? It seems yes, it does, but I am not going to say that SQL Server does not expand the metadata in case #1. Perhaps the time spent for that is not included in the STATISTICS TIME ON output. But definitely, the amount of columns doesn't lead to slower compilation. And let me ask you, why should it be slower? Please, see the execution plans above. SQL Server works with indexes only. That's all it needs. And I think only index metadata have been expanded. Let me try to confirm my theory.

I dropped IX_ProductID and PK_ProductOrder. This gives me a heap. No more useful indexes on top of the ProductOrder table. It seems SQL Server have no choice and must scan the metadata of ProductOrder table and be teeny-tiny slower because of that.

The compilation time is going to be 8 ms.

Picture 15: Compilation time for the heap #1

And the compilation time is going to be 7 ms.

Picture 17: Compilation time for the heap #3

Never give up. There could be one more useful test. I am going to compile each query 100 times and take a look at statistics from Query Store. Again,

Listing 10: Two ostress commands to compile our queries 100 times each

The query used to check the Query Store is:

The three pictures below are the pictures I promised you. These are showing the three runs of the Listing 10. Results of course obtained by the Listing 11. And these three runs were made with 1024 columns in the ProductOrder table. In each picture you can see both of our cases #1 and #3 one-by-one.

These three pictures below show the results of the Listing 10 but count of columns in the ProductOrder table is 2.

Wow, I am surprised a lot because the compilation time is less in both cases #1 and #3 when count of columns is 2 than when it is 1024. Let's write down all the numbers to have a full picture.

The Last Test with 1000 Runs and Compiles

To be sure that the 100 compiles show up a real picture I am going to make exactly the same tests as above with the Listing 10 but now run the compilation 1000 times.

And one more run

The pictures #24 and #25 show the identical tend that Table 1 does. So, we can be sure in results.

I do not see a big difference in performance between #1 and #3. You can use whatever you want. It could depend on your religion if you have one. But please, be aware that sometimes you are going to have a concern in a code review about using the *. Just this symbol is like a red flag in front of a bull. You know what I mean.

One note. You definitely spend more time when you touch two keys "Shift + 7" to type the *, than when you type just "1". But, I am not going to research how much more time you spend.

A short piece looking at how you might convert binary numbers into hexadecimal in T-SQL.