Recently I needed to run SSIS packages from application servers that didn't have SSIS or BIDS installed on them. The application initiating the SSIS package also couldn't wait for the package to finish running before returning. After a few searches on the Internet I found a handful of ways to run SSIS packages remotely, but I wasn't satisfied with any of them, and that's when I came up with my own solution. I created a stored procedure on the SQL Server where SSIS is running that accepts a parameter containing the switches that would be used in the dtexec.exe utility. An example of the stored procedure being executed would look like this:

At this point it looks pretty basic, but there is a little bit of complexity under the hood of this proc. This procedure doesn't actually run the SSIS package; it puts it in a service broker queue. By doing this, the program making the stored procedure call is able to continue without having to wait for the SSIS package to complete. Then, when the message is picked up from the queue it is processed and the dtexec.exe utility is executed using xp_cmdshell passing the parameter value from the initial stored procedure call.

I have attached 3 files to this article that you can use to test this out. To get everything staged, download all 3 files and take the following steps:

Now that everything is staged open up a new query window in SSMS and run the following code. Be sure to replace SQL1 with the name of your SQL Server, the path to the tblImportFiles.csv to the path where you saved it and the path to the SSIS package where yours is saved.

After the package has a moment to complete run this query:

If your query returns these results you have successfully run an SSIS package with a stored procedure call. 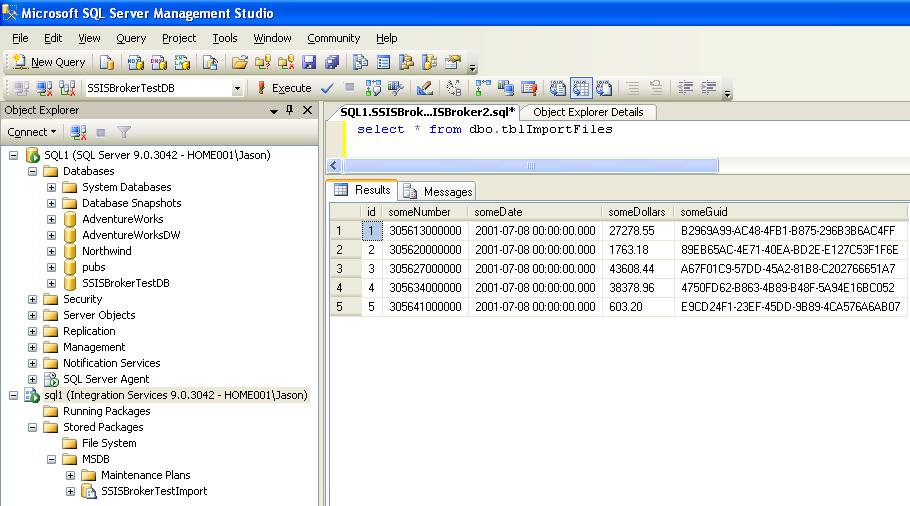 Get a distinct list of file names from a table into an ArrayList and compare against a remote FTP server. Retrieve only the files that have not already been processed into the database.