When you're talking about database queries, performance is a subjective term. While one end-user could be happy with a query that takes ten seconds to execute, another user might not be happy unless all queries run under one second. While performance requirements are certainly diverse, so are the methods used to improve performance. A few key factors that impact SQL Server query performance include:

Appropriate indexing. In addition to watching for fragmentation, you need to make sure only useful indexes are kept on your tables. Your table indexes should be based on your high priority or frequently executed queries. If a query is executing thousands of times a day and is completing in two seconds, but could be running in less than one second with the proper index, adding this index could reduce the I/O pressure on your SQL Server instance significantly. You should create indexes as needed, and remove indexes that aren't being used (this chapter shows you how to do this). Each index on your table adds overhead to data modification operations, and can even slow down SELECT queries if SQL Server decides to use the less efficient index. When you're initially designing your database, it is better for you to keep the indexes at a minimum (having at least a clustered index and nonclustered indexes for your foreign keys). Instead, wait to add additional indexes until after you have a better idea about the queries that will be executed against the database.

*Up-to-date statistics. As I discussed in Chapter 22, the AUTO_CREATE_STATISTICS database option enables SQL Server to automatically generate statistical information regarding the distribution of values in a column. If you disable this behavior, statistics can get out of date. Since SQL Server depends on statistics to decide how to execute the query, SQL Server may choose a less than optimal plan if it basing its execution decisions on stale statistics. 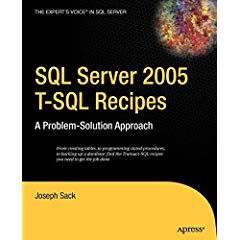 Read more about Performance Tuning in this sample chapter from Joe Sack's SQL Server 2005 T-SQL Recipes or click the image to the left to purchase this book from Amazon.

This 1100 page book offers something for everyone. Using Blobs, Analysis Services, Replication, High Availability. 38 Chapters plus ebook and tools on the CD. Should you get it? Read our review of this book to find out!

A new T-SQL Bible that is a must have for SQL Server DBAs. Read a review of this book.

Is this a book you should read? Spend a few minutes reading the review to find out!

Steve Jones's review of a great guide for tuning the Windows 2000 OS.