"Dad, can you help me with my homework"? The phrase every parent dreads, particularly as you know it's maths night. The eldest is fiddling with his iPad doing something complicated while Grandpa looks on muttering that in his day silicon based tablets were smaller and came with proper chalk!

A quick peak reveals that the offspring has been asked to write about Pascal's triangle and its usage. The triangle itself has a number of interesting properties and is extremely useful for demonstrating probability. 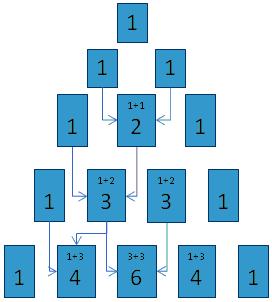 So what has Pascal's triangle got to do with root cause analysis?

Pascal's triangle and the number of components in a system

Let us start by laying out the triangle slightly differently.

In this case Pascal's triangle can actually tell us the number of ways a system can break. So if we look at a 4 component with components A, B, C, D in the system it works out as follows

When you consider the number of components that make up a fairly average family car it is a wonder it even moves, let alone surviving the rigours of family life for 100,000+ miles!

Any row in Pascal's triangle can be worked out from the one above but if you don't fancy calculating hundreds or thousands of rows there are mathematical formulae to help work it out.

First, there are three mathematical terms you are going to need to know

As these functions are likely to be used by people with a knowledge of the Excel equivalents I am going to build my T-SQL functions using the same names.

As I always build my scripts to be repeatable I start with a simple bit of T-SQL to drop my functions. This is exactly the same technique I use when building rollback scripts.

Short of using CLR functions I've found that Frank Kalis' method of calculating factorials is the most effective up to 170! in T-SQL

An alternative approach would be to check to see if the argument exceeds 170 and simply not execute the body of the function. If that approach was taken then the following would be true: -

Our modified function would be as follows

This is due to basic algebra. Take the example where n=7 and r = 3

When we deal with combinations we don't care about the order in which our selected values appear so there will be far fewer combinations than there are permutations.

If we want to maximize the range of values our combination function deals with what we have to do is look at the bottom half of the nCr equation which is r!(n-r)! and for our arguments we need to work out whether r! or (n-r)! is greater. In other words is the number of values we want to select greater than half the total number of numbers?

Whichever term is greater is the one we want to feed into our Permut function because this will cancel out the most from our factorial equation.

Back to root cause analysis

Of course you would have to be cursed by the Gods to have such a number of failures and the chances are that a system failure would manifest itself in a way that at least gives you an indicator where the problem lies so Pascal's triangle is a farcical model for system failures. A farce being defined as follows.

There are however cases where it should serve as a timely warning for architects and developers.

Two of the most important principles in software development are that software components should be strongly cohesive and loosely coupled.

Strongly cohesive components are those within a software system that fulfill a clear and unique responsibility and the functions within any component are directly relevant to the operation of that component and only that component.

Let us suppose that you have a customer processing component and an inventory management component. If you build these components where the functional responsibilities of these components are blurred or shared then, in the event of your system breaking, it won't be obvious which component has actually broken!

Loose coupling of components within a system is where a failure in one should not break the entire system due to dependencies on other and/or unrelated components.

If you ignore these principles then you will find that a problem that manifests itself as a problem with customer processing could in actual fact have its origins in the inventory management component.

To put it mildly you will have a system that is difficult to debug and a nightmare to maintain. If you start to audit such a system you will notice the following: -

If you have such a system then the chances are you probably have a "hero" culture where a few select individuals know precisely how a system works, probably because they had a hand in writing it!

The implications of new technologies

A business adopts new technology because it harbours a belief that it will bestow in it a competitive advantage or at least keep it abreast of its competitors.

Individuals adopt new technology for a number of reasons

Technology 'X' itself isn't a problem and neither is Technology Y, Z, Alpha and Omega but when implementing them all together the number of potential failure points illustrated by Pascal's triangle should raise a note of caution.

Technology X, Y, Z, Alpha and Omega may be fault free and brilliant but when new technologies are implemented their newness and a lack of clear understanding as to their strengths and weaknesses can result in faults that are errors in implementation rather than true errors.

To contribute another thought to the adoptions of new technology, if you use Pascal's triangle as an indicator then the complexity of the technology may be such that you upweight what the model tells you. Instead of saying technology X, Y & Z represent a component each you may decide that technology Y is complex enough to merit a score of 2 so instead of 3 components you assess the risk as if you have 4 components.

More gloom from a professional pessimist

How many times have you dealt with a problem where the cause turned out to be something totally different and seemingly unrelated to what you expected?

If you have the complex interactions between components all of a sudden it starts to matter whether it is A followed by B rather than B followed by A and this has a dramatic affect on the number of possibilities for failure.

Using the UK National Lottery example if we had to pick the 6 numbered balls in the correct order we would go from 1 chance in 13 million to 1 change in over 10 billion!

You should take my use of Pascal's triangle with a pinch of salt. As I said it is a farce/parody illustrating a point. It has not proven that: -

The FACT, PERMUT and COMBIN functions shown in the article are used extensively in probability modelling. FACT in particular crops up in all sorts of formulae used to model customer/prospect behaviour.

If you are interested in data itself rather than just the mechanics of looking after data then there are a wealth of stats functions that data analysts would give there eye teeth to have available to them in the database. If you enjoy programming, whether T-SQL or CLR functions then stats functions represent an interesting challenge.

Tara Kizer talks identifying THREADPOOL waits and what you can do about them.

Satnam Singh walks through the steps he took to troubleshoot a recent issue with memory consumption on a staging server.

Any SQL Server monitoring tool must gather the metrics that will allow a DBA to diagnose CPU, memory or I/O issues on their SQL Servers. It should also provide a set of accurate, reliable, configurable alerts that will inform the DBA of any abnormal or undesirable conditions and properties, as well as specific errors, on any of the monitored servers. This article provides an in-depth guide to the monitoring and alerting functionality available in one such tool, Redgate SQL Monitor. It focuses on the latest edition (5.0), which includes several key new features, such as performance diagnosis using wait statistics, the ability to compare to baselines, and more.

Three SQL Server MVPs (Jonathan Kehayias, Ted Krueger and Gail Shaw) provide fascinating insight into the most common SQL Server problems, why they occur, and how they can be diagnosed using tools such as Performance Monitor, Dynamic Management Views and server-side tracing. The focus is on practical solutions for removing root causes of these problems, rather than "papering over the cracks".