You can use common table expressions (CTEs) starting with SQL Server 2005 to simplify your T-SQL queries. CTEs allow you to separate part of your T-SQL logic from your main query instead of using a view, correlated subquery, or temp table. You define the CTE at the beginning of the statement, and then you can use the CTE in your main query just as if it were a table or view. You can also use a CTE to write a recursive query, which will not be covered in this article.

All the examples in this article will work with the 2005 version of the AdventureWorks database.

Once you get acquainted with CTEs, you will probably find them easy to use. Start with the word WITH, followed by a name for your CTE. Follow the name of the CTE with the word AS and a set of parentheses. Inside the parentheses, type in a valid SELECT query. You can then use the CTE in your main query just as if the CTE was a table or view. You can use the CTE in a SELECT, UPDATE, INSERT or DELETE statement, but the CTE itself will be a SELECT statement. Listing 1 shows two sample queries.

The first query demonstrates how the CTE can be used multiple times within the main query. The main query joins emp to itself to list all the employees who have a manager along with the manager’s name and title. The second query demonstrates that you can define more than one CTE in the same statement. Separate the CTE definitions with a comma. The second CTE, defining the managers, also shows how you can specify aliases for the CTE right after the CTE name instead of relying on the names in the CTE definition. One more thing to keep in mind is that, if the CTE is part of a batch, the previous statement must end in a semi-colon. I have often seen CTE queries with a semi-colon right before the word WITH as a precautionary measure.

Listing 2: Use a CTE to fix a correlated subquery

The first query lists all of the sales orders and the customer ID for each. It uses four subqueries to calculate the count of sales, average sale, minimum and maximum sales for the customers. The second query produces the same results by including an aggregate query in the CTE. On my computer, the first computer takes three times longer to run than the second query!

Listing 3: Use the ROW_NUMBER function with a CTE

Another interesting way you can use a CTE is to join a CTE to a previous CTE. Take a look at Listing 4 to see how this works.

Listing 4: One CTE based on another CTE

The query in Listing 4 returns a list of the customers along with the products ordered on the most recent order. The first CTE, maxDate, returns the maximum order date for each customer. The second CTE joins the first CTE, maxDate, to the Sales.SalesOrderHeader table, returning a list of customers and the most recent order ID. Finally, the main query joins the Sales.SalesOrderDetail table to the orders CTE.

All of the queries within the CTE definitions in the previous listings can run on their own. The second CTE, orders in Listing 4 can not run by itself. It depends on the first CTE.

You can use CTEs to separate part of the logic of your query instead of using correlated subqueries and temp tables. Once you start using CTEs in your T-SQL code, you will probably find lots of ways to use them. 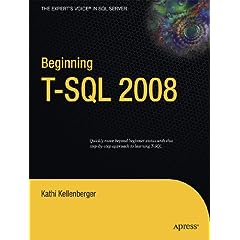 Kathi is the author of Beginning T-SQL 2008. Even if you have little or no knowledge of T-SQL, Beginning T-SQL 2008 will bring you up to intermediate level and teach you best practices along the way. You'll learn how to write code that will help you to achieve the best-performing applications possible.

You'll find an introduction to databases, normalization, and SQL Server Management Studio. You'll understand how data is stored in a database and learn how to use at least one of the available tools to get to that data.

Each subsequent chapter teaches an aspect of T-SQL, building on the skills learned in previous chapters. Exercises are included in each chapter because the only way to learn T-SQL is to write some code.

This book will do more than just give the syntax and examples. It will teach you techniques to help you avoid common errors and create robust and well-performing code.

This article shows how to use 6 SQL table-based tools to solve the same problem, and gives the pros and cons of each.

Power and Deception of CTEs

A performance problem with a CTE based stored procedure, opened the developers eyes to a whole new world

One line to drop a (temp) table if it exists

It is very common to want to drop a table, if it exists, before creating it. This script does so, and it works well with temp tables (where the system views are harder to query).