- either there is a single person in a IT Department or in the case of small company.

problems, errors etc. As we know the operating system has the way to announce to

the SA when an special event appear in system. More, if we want to take a history of events we can save this logs in a text

Let’s think about a scenario: The company has 10 Windows 2K file servers .The network works but the logs are filled in 1

days. In this case SA have to read a file with ~25,000 rows to have a conclusion about

how the machines are working.

Like MS-DBA we can use SQL Server 2000 tools to make an image on this repository of Event Viewer events.

The steps for this goal are:

Insert an Execute SQL Task that runs a script (or a procedure) for append the rows in a table Ap2Rez2 with following design:

3. Run a scheduled DTS Package to reprocess an Incrementally Updating OLAP cube made in following way:

The structure of dimensions:

After reprocessing we can have an image on network activity like this. 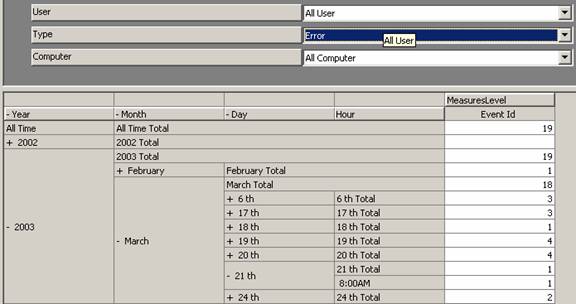 Normally, only the SA (DBA) can browse data .

The DBA can use this cube to see if they can balance the SQL Server activity.

For example :in replication a Distributor can be put on a Windows server with lowest activity or can be viewed the unsafe Windows server that can affect SQL Server databases.

I think that can be put some questions about using this cube in a network:

1. How can we build an OLAP cube to see the track of an illegal attack in a network?

(I suppose it can be linked on the order of events).

2. If it can be developed a whole tools based on OLAP cube engine, can be it attached on a new version of Windows Operating System?

Do you use the maintenance plans or hate them? Wish they would do more? Curious about how they work under the hood? Cmon, you gotta read this one! Trust us, it's not another "how-to" article! Well, maybe just a little bit!

Seagate has a white paper out that discusses how faster (15k rpm) drives can lead to lower cost of ownership. Interesting, and worth looking into.

Jobs are pretty basic aren't they? They are until you get a couple hundred, or a thousand. Andy continues talking about managing jobs by standardizing how you handle notifications and failures, and talks about an interesting idea to monitor jobs separately from SQL Agent. Worth reading!