Well-formatted scripts are always easier to maintain and enhance readability to high degree. Formatting standards are an important part of coding standards anywhere and if not, they need to be. If there are a large number of scripts this can add up to a significant amount of time needed to maintain them. It is also not something that can be done entirely for the sake of cosmetic value. Even if one chooses to format lots of scripts, it can take considerable time and patience. Having a tool that can format scripts without altering any other content can be really useful. There are some third-party tools for T-SQL that do this, such as the formatting option provided by RedGate’s SQL Prompt.

The T-SQL Script Document Object Model, also known as ScriptDOM, provides a way of formatting code as well. ScriptDOM is a .NET framework-based library. ScriptDOM can be used by any .NET based language, VB.net, C#, and of course, PowerShell (>= 5.00). ScriptDOM is a swiss-army-knife kind of a tool; it can format, lint, and parse T-SQL code. ScriptDOM is very sparsely documented, and many of these capabilities have to be discovered by experimenting with the library and understanding it.

The library is named Microsoft.SQLServer.TransactSQL.ScriptDOM.dll and can be downloaded and installed along with Microsoft DacFx package from here. There are separate versions available for the .NET framework and .NET core. This example uses the .NET framework version.

There are options provided in the library to configure how you want the formatting to look. Those are listed below.

Most of these are standard and defaults are very safe to use. The code has all of them specified in case anyone wants a different option from default. It is important, though, to pick the right SQL version. The default is 90, SQL Server 2005.

There are a few options that are not available, but which would be nice. These are

The first step involves connecting to the dll and setting some options. To do this, it is important to determine where the dll resides on the machine that runs the script. In most cases it will be in path below, but this may be different depending on your version of the library. The path is used in the Add-Type command. 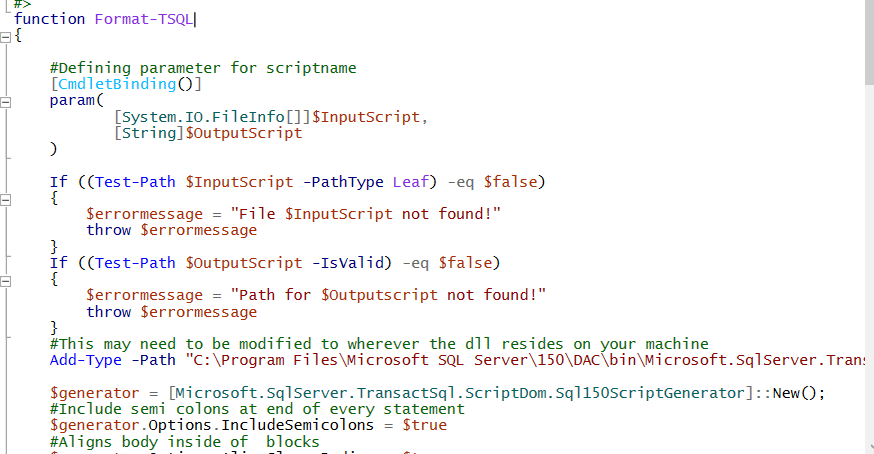 The next step involves creating an object from the SQL150ScriptGenerator class. (Any version of SQL Server going back to 90 may be used. This example uses SQL150). The options for formatting are properties on this object that are set after creating it, as shown below. '$generator.Options.IncludesemiColons' means semicolons need to be included after each clause in the script. '$generator.Options.AlignClauseBodies' means the body of clauses will be left aligned. There is no need to specify each of these options if the defaults are sufficient. In below script options are specified for user to understand what they are and set to default.

The script is parsed using the Parse() method to make sure there are no errors. The Parse() method also generates the high level T-SQL fragment object containing all the fragments in the script. This is what will be used by the GenerateScript() method to format the code. This code checks for errors and lets the caller know how many might be in the code.

Below are a few examples of usage of the Posh cmdlet.

In this example the script file createtable.sql has a  'CREATE TABLE' script, shown below, where the column 'name' is not aligned with the body of the script. The keyword 'smallint' and 'not null' are in lower case.  The output (displayed on console and saved to the specified output file) has these issues corrected.

Here is the code to format the script.

Here are the results. Note the changes in the script.

Below is an example of a view that also has columns misaligned and join clauses not indented for easy reading. Both issues are fixed in the output, which is visible on the screen and saved to the script file specified.

Below is an example of a stored procedure script that has the query inside misaligned, reserved word in parameter 'nvarchar' is in lower case.  Both issues are fixed in the output,visible on the screen and saved to script file specified. 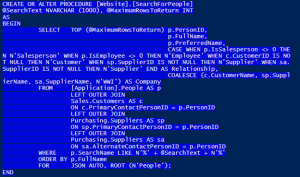 As with any code, there are pros and cons to using ScriptDOM.

Any call to ScriptDOM, including what is being demo-ed with formatting scripts, can be made asynchronously with no active connection to SQL Server. There is no SQL Server install needed on the machine running the script. This makes it very lightweight to run on code repositories, or other large volumes of code.

The formatting option of ScriptDOM strips code of comments, which is why it should be used with caution on existing object scripts. It is also lacking in certain formatting options that would be useful, such as a choice between tab and spaces for indenting, the position of commas as column delimiters, and optional square brackets around object names. ScriptDOM is also very sparsely documented. Most people have to learn how to use it by trial and error or by referring to the few blog posts available out there.

1 There is a C# version of formatter, written by Michael Swart(t|b) for removing comments from code. It achieves the same purpose and  it can be found here.

2 A great introduction to ScriptDOM can be found on this talk by Arvind Shyamsunder(t|b) on the PM Team. Arvind’s GitHub Repo also has several C# scripts using ScriptDOM for various purposes including an older version of the formatter.

Below is the code using ScriptDOM to format scripts and generate an output (formatted) file.

In this level of the Stairway to ScriptDOM, we examine the way the tool parses scripts and creates tokens from the text.

Get an introduction to the Stairway Series and learn about the power of the ScriptDOM library.

SQL Server 2017 introduced the concept of graph data tables as part of the SQL Server database engine. With SQL Server 2019, there were some enhancements like ‘shortest path’ function and constraints on edge tables that make this feature more usable – although it is far from a full-fledged graph database. Graph tables are essentially […]

Temporal tables a.k.a Table Versioning was introduced in SQL Server 2016 and is an easy, convenient way to track changes to data. A good introduction to temporal tables can be found here. One of the key advantages of versioning tables is easy of querying – or getting a ‘single pane of glass’ look of how […]