I recently had someone contact me who needed to figure out when a user’s database permissions were changed. Apparently, a domain account that had been working for months, doing things in a specific database, suddenly could not do its normal work. On checking, we found that all of the user’s permissions had been removed from the database. The permissions were reset but management wanted to know when and who changed things. All the people with access to assign permissions were asked about it and everyone swore that no changes had been made. Uh huh…

Fortunately the default trace in SQL does contain auditing events for when objects and logins are changed. 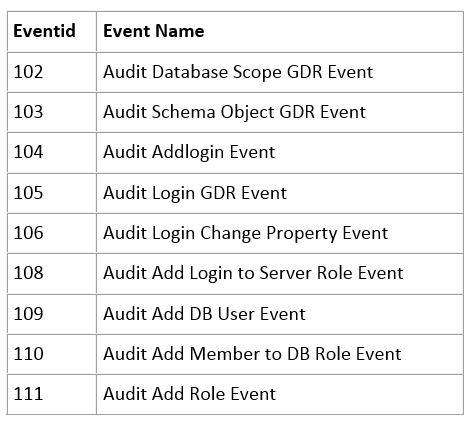 I sorted my results on the StartTime column but have also provided a couple of other columns that may likely be sorted on in other situations.  Just comment out the trcdata.StartTime column and uncomment the column you might want to sort with to have results displayed in a way that makes the best sense for your stuation.

Here are the results that were returned and quickly dropped into a spreadsheet and sent my client:

We can see that developer2 had dropped some permissions at 2:52 pm, which caused the domain account to be unable to access the data it needed.  Of course, developer2 was talked to about changing permissions on a production database and he explained that he had thought that he was working in one of the development instances when he ran the statements.  It was a simple mistake that can be easily fixed by restoring the dropped permissions and then setting some limitations on the ability of developers to change security in production.

It is really good to know that there is some trace information that can be easily accessed so make sure to review how to get to the default trace info if you ever need to.

This script allows the DBA to quickly determine if a deny statement is stopping a user from accessing db objects.

I am new to SQL Server 2005/2008 having administered SQL Server 2000 and below. I have heard there are a lot of new permissions at the database level. What are they and what do they give rights to perform?

Get Back into SQL Server After You've Locked Yourself Out

Someone, while locking down the SQL Server, removed the permissions by which the DBAs came in and administered the server. As a result, we cannot get back into SQL Server. How can we restore our access to SQL Server? Check out this tip to find out.