This article is just a short follow up of previous article (http://www.sqlservercentral.com/articles/SQL+Server/158068/) regarding filegroup restoring and it describes one issue with join elimination optimization.

The scenario described in previous article assumes that 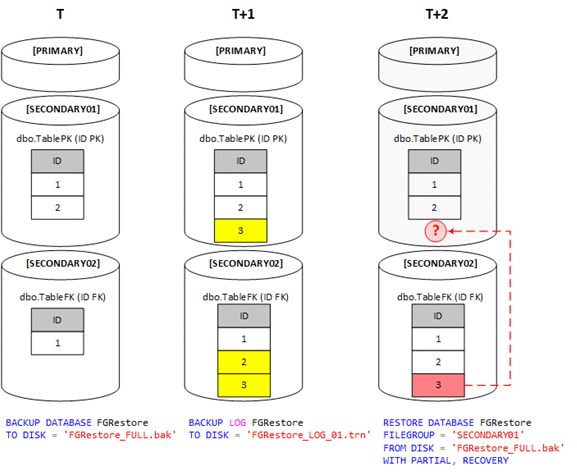 After these steps, tables with foreign keys could become inconsistent because some rows from the PRIMARY KEY tables could be missing. In this case the row 3 from dbo.TableFK has a missing reference to dbo.TablePK, which now, at time T+2, has only two rows (1 and 2). Another important thing is that the state of foreign keys contraints (sys.foreign_keys.is_not_trusted) is unchanged, in this scenario the foreign key constraint remains trusted (is_no_trusted = 0).

Join elimination and One Possible Issue

Let's create a simple view using both tables and then execute a query using this view as data source:

For the first two queries we get the following results 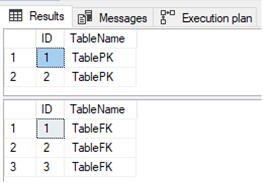 For the last query, we get just two rows (as expected):

In this case, the execution plan includes two data access operator (one Table Scan on dbo.TableFK and another Clustered Index Seek on dbo.TablePK) as expected:

This time, in a unexpected turn, we are getting not two, but three rows:

These results are wrong. Because of the INNER JOIN, we should get only common IDs; the two IDs in our case.

According to above blog post this optimization happens only when foreign key constraint is trusted. This is our case because

On short term, one solution to avoid this behavior would be to transform trusted foreign key constraint into untrusted ones after a filegroup restore:

The status of the foreign key is changed now:

and we get the expected results:

Also, the execution plan is changed, including a Nested Loops (Inner Join)

The medium/long term solution should be be, from my point of view, to find all missing references by using

and then changing data and re-enabling disabled constraints.

After a filegroup restore, not only could the database become inconsistent, but we could also get the wrong query results if the restored filegroup contains tables referenced by tables from other filegroups. This article shows how to avoid this issue.

A DBA's tasks, from day-to-day, are rarely constant; with one exception: the need to ensure each and every day that any database in their charge can be restored and recovered, in the event of error of disaster. In this book, you'll discover how to perform each of these backup and restore operations using SQL Server Management Studio (SSMS), basic T-SQL scripts and Red Gate's SQL Backup tool.

It’s uncommon that a SQL Server DBA needs to create a customized backup and restore routine for an application using combination of LiteSpeed extended stored procedures. However, you should be really careful when you are implementing such a solution.

Backups are an everyday part of DBA life, whereas restores tend to happen on call at 3 a.m. In this article, Grant Fritchey looks at what you should be doing to make your restores as quick and seamless as possible.