Display All Errors Fired in a Restore Procedure

As an example if a user tried to restore a database using a stored procedure such as the one created in OriginalRestoreProc.sql but there was not enough available space to complete the restore; the only error displayed to the user is:

This means that the user has no immediate way of telling why the restore failed, and the error itself is not in any way user friendly.

The extended events engine for SQL Server was introduced as a lightweight replacement for SQL Trace, an event session is setup to watch for a given event, and when it occurs, to capture the data configured by the event session and sending this data to a given target, for an in-depth introduction to extended events see technet article http://technet.microsoft.com/en-us/library/bb630354(v=sql.100).aspx .

Listing RestoreErrors_XEvent.sql creates the extended events session that looks for the errors generated by restore statements called by the stored procedure login account, specifically the errors listed in the table below. 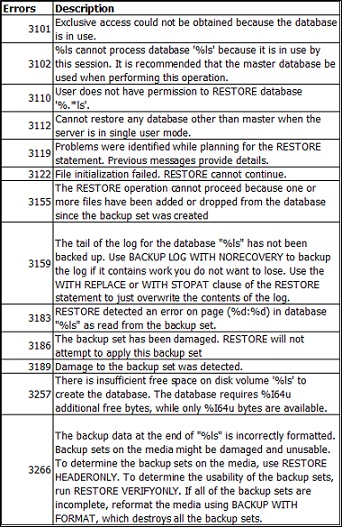 To get the captured extended events returned to the user, the original stored procedure was modified, by adding additional code to the catch block; this code reads the extended event data written to the target of the extended event session which is in XML format, and then converts it to a tabular format and returns the results to the user, see listing ModifiedCatchBlock.sql, as mentioned earlier the Catch block contains the code, called when a SQL Server script encounters an error if a Try-Catch construct is used for error handling.

So using the scenario mentioned earlier where a user tries to restore a database but there is not enough space to complete the restore, the image below shows the additional results that are now available to the user via the results tab in SQL Server Management Studio. Note that in this scenario where there is not enough space to complete a database restore two errors are raised. The first error to show the reason why the restore failed and how to correct it. The second shows the phase of the restore that the error occurred in, namely the planning phase.

You will not always see two errors returned. The number of errors returned vary depending on the initial raised error. For example, if a user tried to restore a database, that their current session was connected to, only one error would be returned. That would be: Error: 3102, %ls cannot process database '%ls' because it is in use by this session. It is recommended that the master database be used when performing this operation.

Using the power of Extended Events, I was able to get report all errors raised within a stored procedure and display them to a user. This is particularly useful in SQL Server 2008R2 where there are extended events but no THROW error handling command.

To read more about extended events, I recommend that you check out Jonathan Kehayias' excellent series on the subject http://sqlblog.com/blogs/jonathan_kehayias/archive/2010/12/01/an-xevent-a-day-1-31-an-overview-of-extended-events.aspx

if you get bunch of back up files ( full backup and transaction log backup, you need restore those database to different server, you can use my stored procedure to genereate the restore command

Can the Secondary files in a database be taken offline?

SQL Server Database RESTORE WITH MOVE or not WITH MOVE

Mike Eastland frequently restores production databases to various development servers. The drive layouts between the servers are almost never the same. He is constantly shuffling files on his development servers due to space constraints, which in turn breaks the automated restore scripts because the MOVE clauses are invalidated. Does he have to use the MOVE clause every time he does a restore?