Day 5 of my OLAP sprint – which I can now more accurately term a MOLAP sprint (or maybe MOLAP meander) – began with the official opening of PASS Summit 2012. DBAs, BI Developers, etc. from near and far packed into the ballroom at the Seattle Convention Center to hear Ted Kummert (VP of the Business Platform Division at Microsoft) give a keynote address, highlighting some of the new features of SQL Server 2012, as well as giving a sense of Microsoft’s vision for the future of the SQL Server product stack. There were some good demos of things like columnstore indexes, and a few interesting announcements, including:

You can catch the Keynote and all the demos here if you missed it.

The unequivocal star of the show this morning was Amir Netz, a Technical Fellow at Microsoft, who works as an architect on their BI products. The title ‘Technical Fellow’ is one I enjoy. It’s refreshingly clear and unpretentious compared to the litany of acronyms that often follow people’s names (myself included, an MCTS) and yet it’s also somehow humorous in an old-timey, British way. The weight that the title bears, however, is nothing to smirk at – Technical Fellows are the highest level of technical leadership at Microsoft, and apparently there aren’t very many of them at all.

The most engaging thing about Amir is his passion and exuberance for BI. He took us through a Power View demonstration that brought the following conclusion to bear: if you want to make profitable movies with Angelina Jolie, cast her in animated movies where you can’t see her on screen. 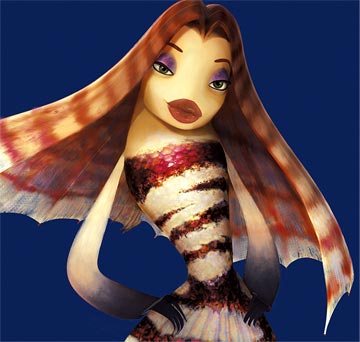 The punchline had the whole room laughing, but the best part was yet to come. Amir announced that Power View was going to be available for reporting against MOLAP models! They’re implementing it by supporting full DAX querying against multidimensional cubes. Since I skirted the tabular model, I don’t know much about DAX, except that it more closely resembles the Excel expression language than anything else, and it’s not as mind destroying (to borrow Pete Myers’ phrase) to learn.

Now, those of you who have been following along at home will know that I’ve got some humble pie to eat. Just last night, I suggested that the fervor for Power View on MOLAP probably hadn’t reached critical mass (just 34 votes on Connect), and made irreverent comments about farting in the wind, and the cathartic – if hopeless – act of voting.

Well, the joke’s on me, because as of Amir’s announcement this morning, Microsoft has proven me wrong. So, there’s pie on my face for sure, but a big smile under that pie, because I’ll get to play with Power View on my cube.

As for the actual release date for the support: I spoke with a couple of Microsoft BI engineers tonight at the Microsoft pavilion, but nobody seemed to know exactly when it would be happening. Fingers crossed it’s sometime soon.

A Home for my Cube

Having put together a halfway decent Analysis Services cube, I started to wonder what the Best Practices were for the underlying hardware layer. I found Karan Gulati, a terrific and very friendly Microsoft Support Escalation Engineer who had come to the PASS Summit all the way from Bangalore India. Karan was one of many Microsoft Engineers working in the SQL Clinic here at PASS. The SQL Clinic is arguably reason enough on its own to justify coming to PASS. The ability to sit down and have real conversations with people who know the product inside and out is fantastic. Last year, I had a question about the Reporting Services .NET control, and got introduced to Brian Hartman, who turned out to be the guy who wrote the control! Such a treat to have such great access to experts.

I had taken done some quick projections on how my underlying OLTLP database might grow over the next 5 years, and came up with a decent approximation of what the size of my corresponding data warehouse and Analysis Services cube would be as well. I`m on the very low-end of what the Microsoft SQL Server product stack is capable of supporting, so although I knew I’d be able to fit my solution on relatively inexpensive hardware, I wanted to know what the recommendations were. Not surprisingly, the recommendation was to separate my OLTP system from my data warehouse, my data warehouse from my OLAP cube, and my Reporting Services instance from my OLAP cube. Everything on its own box. The reason is fairly straight-forward, the different services require different consideration for their hardware specs.

While I accept this answer from a holistic technical perspective, I’m likely going to have to house some of the same services on the same boxes, in order to be cost-effective.

I also spoke with a Dell representative tonight, about their appliance model (HP has a similar one), which is an interesting alternative. Basically, you buy a server whose pricing includes not only the hardware, but also the O/S license, SQL Server license, and support as well. This is a more high-end solution that I will need if I get around to implementing an OLAP solution any time soon, but an intriguing option nonetheless. There’s more info on Microsoft’s site, here. Dell also had a very cool interactive SQL Server Advisor tool, which takes you through a series of questions about your data assets and environment preferences and spits out a very comprehensive solution, including Hardware, Software, and Services elements. 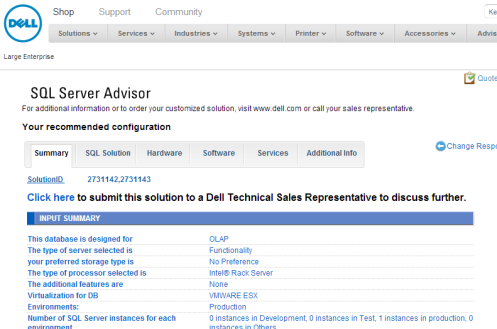 My results from the Dell SQL Server Advisor Tool

The day ended well: I was one of the first 200 people in line at the Pragmatic Works booth, and got a free signed copy of Wrox’s “SQL Server Integration Services 2012″, which will help nicely when it comes times to load my data warehouse and process my cube. Thank you, Pragmatic Works!

I stopped by Chipotle’s for a chicken burrito – no surprises there – before heading back to the hotel, completely exhausted from a long day.