Editor's Note: There is a great discussion that follows this article and debate it's content. Be sure to read it

Author's Note: Since I've written this article, I've become a little older and wiser, and I realize the one overriding answer that is a common thread to almost all SQL Server related questions is, "It Depends". Please view the article below (unedited since first published) in that light. And yes, as the Editor's Note above alluded, at least some conversation was generated on why we use what we use and we should always see if there's a more efficient way to do it. I will concede that there are times when cursors will do in certain situations better than other methods. So there... 🙂

I decided to make an attempt at a first article to help folks wean themselves off using cursors. It is quite easy to alter your code to use traditional loops and avoid the overhead of using cursors. For this example, the performance difference would be minimal but on cursors that work on massive tables, the overhead of a cursor definitely gets in the way and a conversion to more conventional while loops would be better.

Here is a simple example of a cursor that does a dbcc checkdb on each database (I know sp_msforeachdb would work as well, but this is mainly proof of concept).

To somehow get past the fetch next feature of a cursor, you will need to make a table. As this is an example with a small amount of rows, I will use the table variable @dblist, but for larger conversions, #temp tables would work just as well:

When compared side by side when displaying the estimated execution plan, the Cursor based query was 69% compared to the 31% of the more conventional loop. So at least for this example, the cursor takes at least twice as long as the reguler while loop.

As you can see in the image below, while the actual allocation/deallocation of the cursor doesn't have much of an impact, the inefficient way the query is executed is what causes this to be slow. Imagine scaling the cursor to tables with millions of rows. 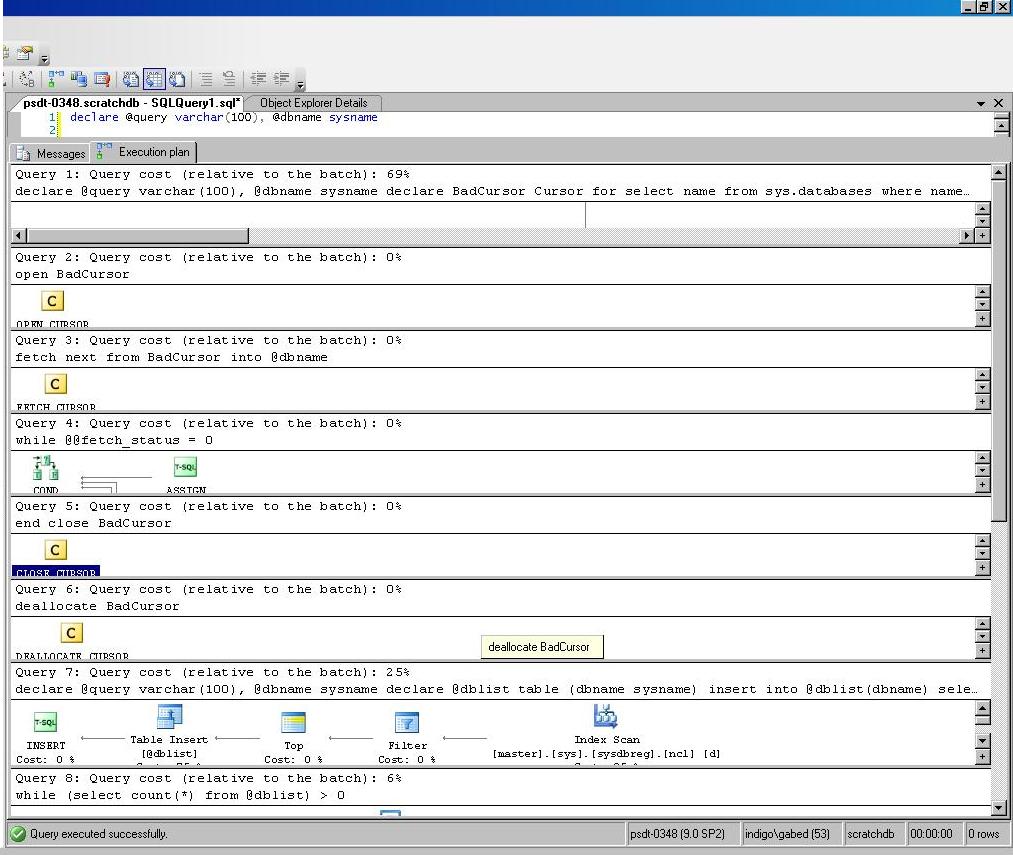 I hope this helps everyone realize the cost of doing business with cursors. While I readily admit the fetch next feature of cursors is attractive, don't be distracted by the dazzle and realize there is always a better alternative to using them.

Editor's Note: There is a great discussion that follows this article and debate it's content. Be sure to read it

This article depicts how to approach row by row updates needed in a salary table. It might not directly let you increase your salary, but it could help you at review time.

in this scripts there are two methods of creating sample data for a gambling application.
i have used both cursors and loops.

Cursors provide a means of processing through a set of records row-by-row. However, many companies have a policy against using cursors in their SQL Server standards. This article examines the problem with cursors and alternatives to using them.

Sometimes cursors are necessary when executing queries in SQL Server, but most of the time they can be avoided entirely. This article shows where cursors can traditionally be used, and how you can use features packaged in SQL Server 2005 to avoid them.