depending on the implementation. In middle of the package execution, in case the FTP location is not

available or the source text file is missing, execution will fail. Most of the times, you need to attend to the

relevant issue and re-run the package. This means that package will run from the

beginning and which means that you have to wait again for long time.

terms, you are wasting your times by re-running the entire package. If you have an option where you can restart the package from the point of failure it will

The Checkpoint feature in SSIS is about restarting package from the point of failure.

a XML format. When it re-run, it reads from the saved file and load the variables and will

First you need to configure the checkpoint file name. For this you need to right-click the package and select properties.

In the properties window, navigate to Checkpoint category and configure like following image.

check point values. You can have any extension you like. However, it will be

better to have a extension such as .xml since the checkpoint file is an XML file. I have

also seen that some people are using .CHKP as the extension. The point that I want to stress

name. Also, rather than hard-coding your file name it is better to use some kind

of strategy for the file names. The following strategy is the recommended method that I used and it is

working fine up to now.

1. Have a common folder like C:\checkpointfiles to save all the package configuration files in your SSIS project.

In case you need to restart from the start, you simply need to delete the file in

2. Pass the folder name to a variable in the child packages from the parent package by using parent package variable type in the package configuration. We have already discussed how to create package configurations for SSIS packages. By following above two steps, by simply changing the main package variable which contains the value for checkpoint folder, all the locations will be changed.

4. By using the @[System::PackageName] variable, you can address the issues of renaming SSIS packages.

CheckpointUsage is to determine how checkpoints are used.

There are three options available, they are Never (default), IfExists, or

Never indicates that you are not using Checkpoints and in case of a re-run the failed package from the beginning.

The Always choice raises an error if the Checkpoint file does not exist.

SaveCheckpoints should be True to implement the Checkpoint

behaviour. If this is False it doesn't matter what you have configured

previously. It should be the first option to select in the checkpoint

After configuring package for the checkpoint configuration, next is to configure each control task

For each control flow task, you need to set True for FailPackageOnFailure and FailParentOnFailure properties.

this task fails; this implements the restart at the point of failure behaviour

when the SSIS package property SaveCheckpoints is True and

CheckpointFileUsage is IfExists. If you have

not configured this to true then package will return success, though this task is

failed hence checkpoint configuration will not be effected.

FailParentOnFailure Select True when the task is inside of a

container task such as the Sequence container; set FailPackageOnFailure

for the task to False; set FailPackageOnFailure for the

Having understood the theory behind checkpoint, now it is time to show an implementation with checkpoint. I have created simple SSIS package to demonstrate the SSIS Checkpoint. In this there are three Execute SQL Tasks.

Task B: Select 1/0 - Which will introduce an error

After configure the SSIS checkpoint, let us run the package and you will end-up with following state. 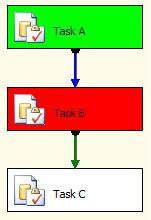 Let us check the checkpoint file at this moment.

You can see that checkpoint file will save all the variables along the with value time at which the package was failed. Then it will save the ID(s) of the controls that was successful. In the give example {7C89E7ED-4225-44CB-949F-0FA797D0238E} is the ID of the Task A.

Then fix the error at the Task B and re-run the package and you will see the following state for the SSIS package. 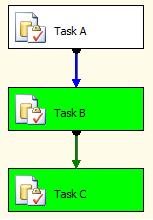 Important thing to note is that, it will start from the failed task earlier. As it does not run the failed task, it will reduce the run time. After the successful completion of the SSIS package, checkpoint file will be deleted.

There are two important points to remember when it comes to SSIS checkpoint.

1. Checkpoint can be implemented only at the control flow not to the data flow. This means that in case of

failure in middle of the data flow, at the re-run of package it data flow will run from the

2. Checkpoint will not have transaction enable. For example, if there is a task which has several Insert statements and in case of a failure of the one insert

statement, other insert statement will not be rollback. In case of a re-run of the package, failed control will execute again and there will be duplicate of data. Therefore it is advisable to introduce transaction to SSIS packages.

In Part 3 of his series on checkpoints in SSIS, Aaron Akin talks about how you can use event handlers in your containers to better control the workflow.

Continuing on with his series on checkpoints, Aaron Akin now looks at how various types of containers can be used with checkpoints and Integration Services.